“He fell asleep reading your book. I couldn’t resist a photo.” 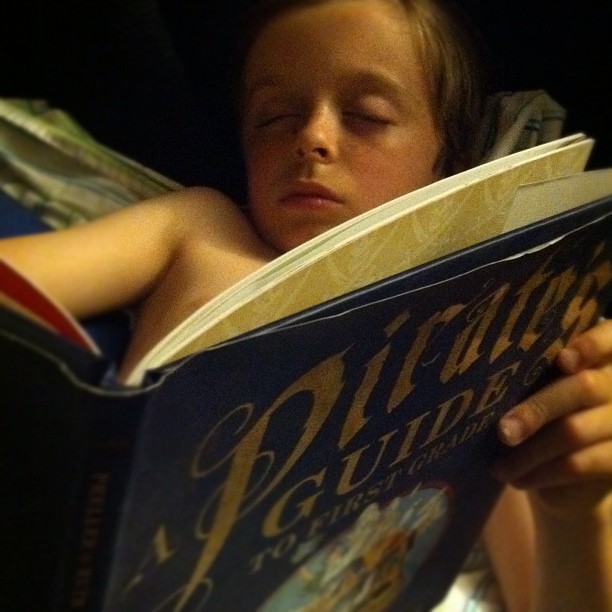 Mr. Preller,
Thanks so much for writing Along Came Spider. I’ve just finished it as a read aloud with my 4th and 5th graders. I selected it because I have a student who has been diagnosed with Asperger’s. I thought the book was insightful, inspirational, and made my students inquisitive.

I found your post about the book covers ironic. One of my reasons for writing to you was going to be to ask you about the cover. I now understand that you didn’t have much say in the cover but thought you might be interested in the discussion that it generated in my classroom as we were reading.

Of course, the first question that the students asked was “Which one is Spider? I told them I didn’t know, but we would probably find out during our reading. As we journeyed through the story, several predictions were made about “who was who” on the cover. Here are just a few:

“Spider sounds like someone who would have green hair.”

“Trey must be the one looking to the side because in the story we read that he doesn’t like to look directly at people.”

“It must be Trey who is staring at the wall, just like at recess.”

And then the revelation……”It’s Trey with electric lime hair.”

The students wanted to know if you purposely hid clues on the cover. They also wondered if you were purposely trying to throw them off because the boy on the cover could be Ryan. Even though it appears it was unintentional, I appreciate the discussion it generated!

As I stopped in the middle of the book for a written comprehension check, one of the questions I asked was which of the main characters do you most identify with. Three of my students said they identified with Trey because they were being bullied or they felt like were being pulled in different directions by their friends. Without reading your book I am not sure how I would have known about this. Interestingly, the student with Asperger’s identified with Spider!

Sometime books entertain us and sometimes books inspire readers to reveal true thoughts and feelings. Thanks for writing one that does both!

After the feeling returned to my fingers, I typed this reply:

Thank you for that exceedingly kind and thoughtful letter. As a writer, I never know how a book will be received. I mean, I know what I hope the book conveys, but I’m never sure if others will find those same qualities. And then there’s this: I’m just glad (and amazed) when somebody reads it at all! I was hoping that Spider would be embraced by classroom teachers.

That’s why it was so gratifying to read your letter, especially hearing about the class discussions. I think of Along Came Spider as a “talking” book. A springboard that, in the hands of the right classroom teacher, can lead to positive classroom conversations.

As for the new cover, you are right, it just happened at the last minute without any input from me. It was more like, “Oh, by the way, we changed the cover.” I didn’t mind it, actually, and I understood where my publisher was coming from. They only wanted to sell the book — and I’m shallow enough to be all for that.

The creative license they took with the cover shoot surely caused some of the confusion. At the time of the wall scene, Trey’s hair was its normal color. He did not dye it until much later in the book. I guess the art director felt green hair would add interest to the cover. She might have been right. Part of making a book is, I believe, trusting in the collaborative process. Unless you feel like something is absolutely a mistake, you have to let talented people do their jobs. And hope for the best.

Well, this is crazy. I just got a call from Shannon Penney, the Scholastic editor for Along Came Spider, who informed me that Spider, too, was named by The New York Public Library in its 2008 list of “100 Titles for Reading and Sharing.”

I am honored and grateful.

I understand the list includes books for readers up to age eleven. The New York Public Library publishes a separate annual list of “Books for the Teen Age,” which will be announced later. The other Scholastic titles included on this list:

Nic Bishop Frogs by Nic Bishop
Sipping Spiders Through a Straw: Campfire Songs for Monsters by Kelly DiPucchio
Swindle by Gordon Korman
What to Do About Alice? How Alice Roosevelt Broke the Rules, Charmed the World, and Drove Her Father Teddy Crazy! by Barbara Kerley
Ways to Live Forever by Sally Nicholls