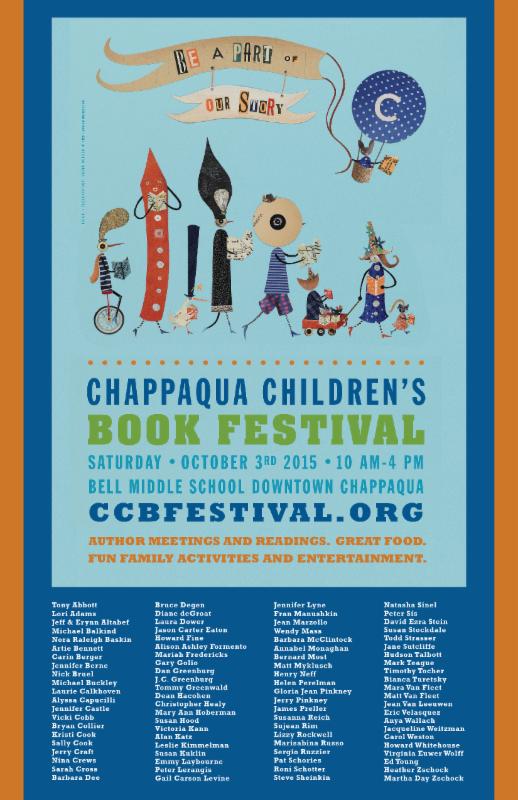 It will be a veritable cornucopia of . . .

Oh, just come. Bring the kids. And please, above all, bring the credit card! This is Chappaqua, after all.

This is a beautiful community event, one of the great ones in all the land, jam- packed with incredible (kind, generous, talented, bookish) people.

I figured I’d share some snaps from my recent trip down to my old stomping grounds on Long Island.

On Wednesday night I drove to New London, CT, to take the ferry to Greenport, Long Island. That’s where my dear old mom lives, so I crashed at her place for two nights. Mom is 89 years old and, these days at least, a very happy Mets fan . . . 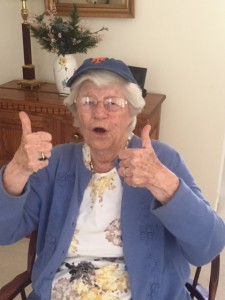 On Thursday, I drove out to the Sequoya Middle School in Holtsville where I was invited by Jennifer Schroeder and Sandy Bucher. Like all the best days in my life, it started with lunch! I ate with students from the Summer Reading Club. 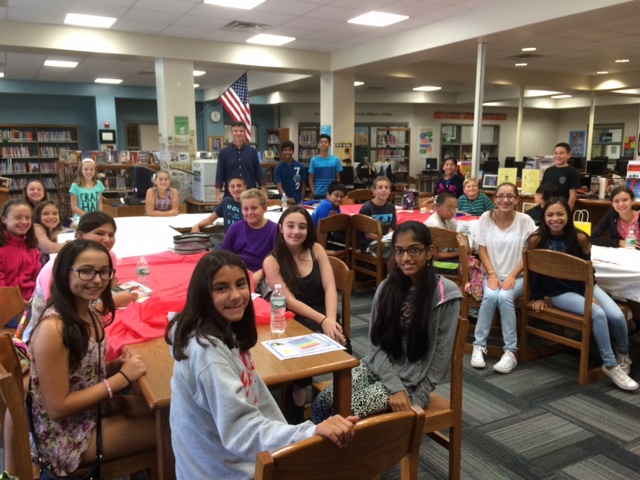 What a great way to start the day. With pizza . . . and a great group of young, intelligent, enthusiastic readers. 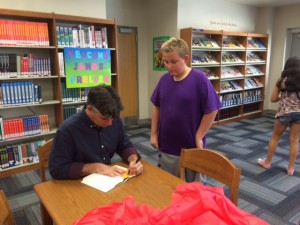 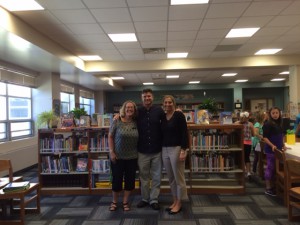 This is Sandy and Jennifer, who made the day the possible. 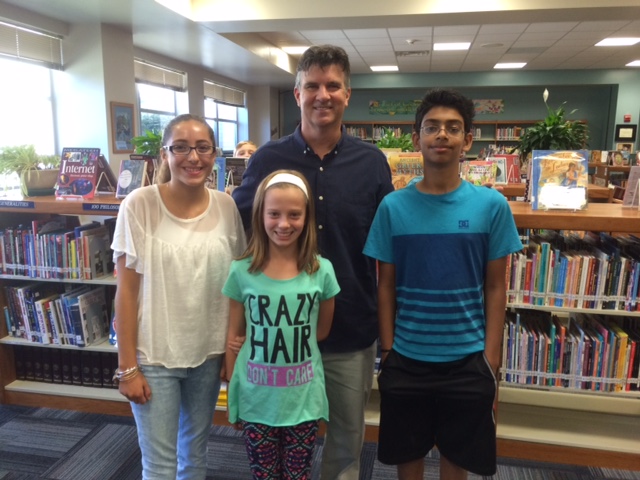 These three won prizes in a raffle, though I felt like the real winner all day long.

On the way to the assembly with an audience of 260 students, one girl asked me in a soft voice if I’d seen the poster. “Yes, it’s fantastic,” I said. And after a pause, I wondered, “Did you make it?”

She sure had. Of course, I demanded her name and a photo. Angela looks proud, doesn’t she? So much talent and a great smile, too. How is that fair? 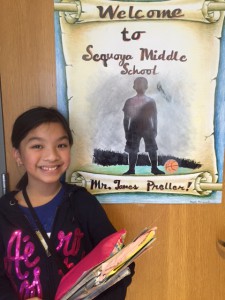 Later I drove home and watched the Mets with my mom. It’s how we roll.

On Friday, I visited Bellport where I presented to a large group of librarians from Suffolk County. There were about 100 in the room, my guess, and I think it went well. Librarians are my kind of people, so hopefully it was relaxed and enjoyable for all concerned. My fingers are crossed in the hope it will lead to more school visits in the area. Thank you, Gail Barraco for the invitation! 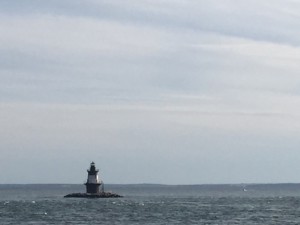 . . . and drove to a hotel near Warwick, NY. The next morning, Saturday, I signed books at the fabulous Warwick Children’s Book Festival, thanks to Lisa Laico, Christina Ryan-Linder, and Judy Peterson. The amount of work that goes into these things — the months of planning, the degree of detail — is mind-boggling. What a great gift to the community.

As an author, I am always grateful for a chance to meet other “real, live” authors. Every time I meet someone new . . . 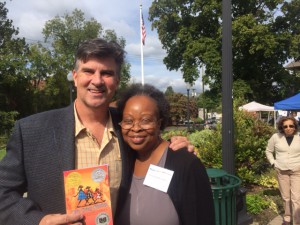 I loved meeting Rita Williams-Garcia. She was so warm and friendly, we got along instantly.

. . . and I also get the chance to catch up with established friends. 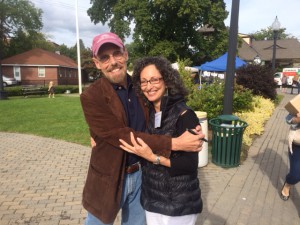 I’ve become a real fanboy when it comes to Wendell and Florence Minor. All they do is quietly make high-quality books, year after year. I have huge respect for their work and for the way they conduct themselves: wise, kind, grateful, modest, and so talented!

After that, it was time to head home. My real job, the essential job, is for me to sit alone in a quiet room. That’s where I’m at now, trying to figure out the next book. But it’s trips like this that energize and inspire me to keep at it, even during the difficult times. Many thanks to one and all!

Yesterday I reread Crockett Johnson’s Harold and the Purple Crayon.

It was published 60 years ago, btw, in two-color.

And, of course, it’s perfect.

But what I keep thinking about these past 24 hours is that throwaway phrase, “a deserving porcupine.”

Do you recall it? Possibly not.

Harold thinks about a picnic, and pies, and being Harold, he goes a little overboard.

“He hated to see so much delicious pie go to waste.”

Here’s what kills me:

“So Harold left a very hungry moose and a deserving porcupine to finish it up.” 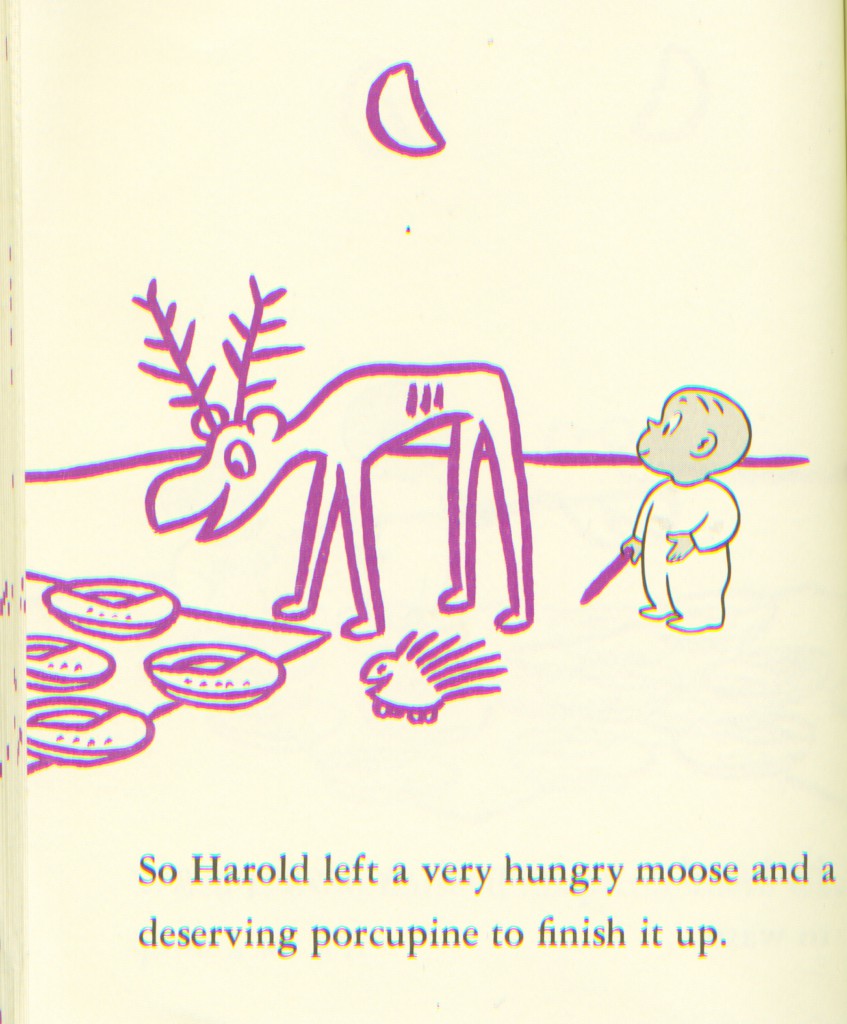 That phrase: a deserving porcupine.

How did Crockett Johnson even think of that? Out of all the available adjectives for a porcupine, he deemed this particular one “deserving.”

What did it do to deserve such treatment? I guess we’ll never know, but it feels to me like there’s a story there, somewhere off the page. The deserving porcupine appears on only one page of the book, then off Harold goes, in search of a hill to climb . . .

I should add this postscript: 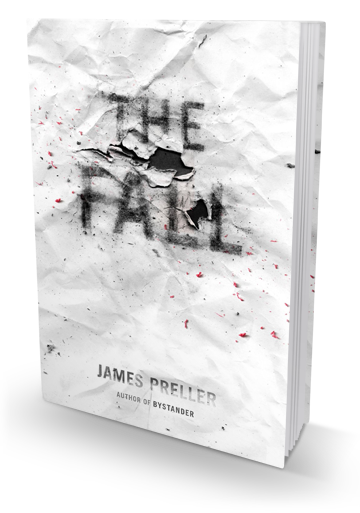 It’s pub day for my new book, The Fall.

I really think everybody should buy it. That would be awesome. Thanks!

The lineup of authors and illustrators will make your head spin. Seriously, if you like children’s books at all — or if you just enjoy creativity & the arts in general — this is such a good scene smack in the heart of downtown Princeton. Check it out. And if you, please say hello. 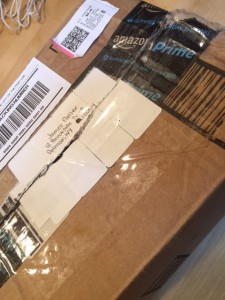 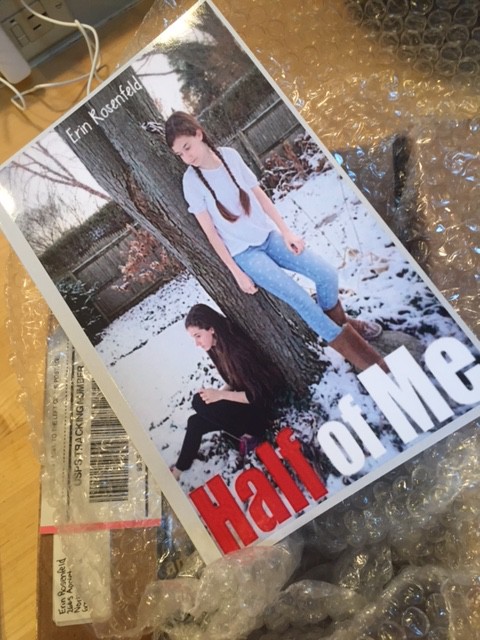 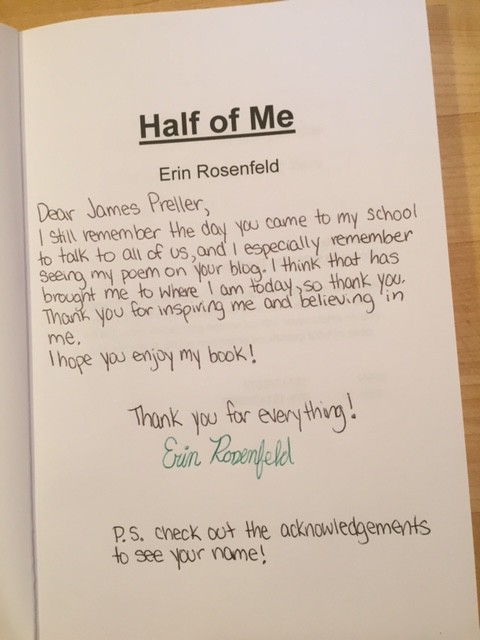 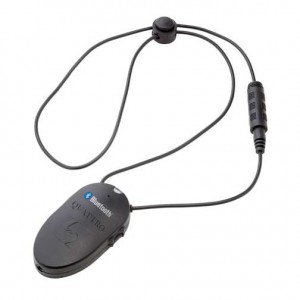 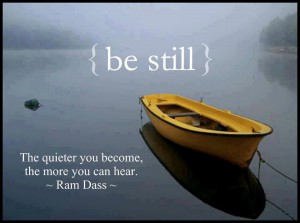