School Library Journal reviewed The Fall in their July issue and it’s a good one. 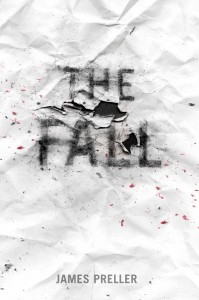 There was a complete sentence:

“Told through journal entries, Preller’s latest novel expertly captures the protagonist’s voice, complete with all of its sarcasm, indifference, and, at the same time, genuine remorse.”

There were other kind sentences, too. So why hold back? Here’s the whole dang thing below.

Thank you for the thoughtful review, Kimberly Ventrella, whoever you are!

I really hope this book finds an audience. Fingers crossed.

Gr 6-9–A compelling look at the aftermath of bullying, from the bully’s perspective. Sam Proctor thought it was funny the first time he posted a hateful comment on Morgan Mallen’s social media page. It was just a game, after all, and superpopular Athena Luiken said it was his turn to play. Even after Sam befriends Morgan and starts hanging with her outside of school, he continues to post anonymous trash on her page. When Morgan jumps off of a water tower and kills herself, Sam is forced to confront his actions and wonder if a bully can every truly be forgiven. Told through journal entries, Preller’s latest novel expertly captures the protagonist’s voice, complete with all of its sarcasm, indifference, and, at the same time, genuine remorse. Readers will relate to the teen, who’s less a bully than an average guy who gives in to peer pressure and inaction. This fast-paced story will spark discussion on cyberbullying, depression, and how to deal with tragic events. However, the ending introduces an element of magical realism that dampens the impact of an otherwise persuasive realistic tale. VERDICT While the conclusion falls short of the strong setup, this book stands alongside other well-crafted titles on bullying, such as Dori Hillestad Butler’s The Truth About Truman School (Albert Whitman, 2008) and Preller’s Bystander (Feiwel & Friends, 2009).–Kimberly Ventrella, Southwest Oklahoma City Library