Finding Inspiration for SCARY TALES: A New Part of My Writing Process (and an Excerpt, Too)

I just handed in the revised manuscript for my SCARY TALES series, which is chugging along. I have to say, I love writing these books, it’s like a faucet has been turned on all the way. I’m just gushing words, plot twists, stories.

This next one, the fifth in the series, will be titled either “The One-Eyed Witch” or “The One-Eyed Doll.” Honestly, doll is more accurate, but witch might be more appealing, especially to boy readers looking for any excuse NOT to pick up a book.

When I wrote the story, I paused early in the action to cast around the internet for images that would help me, and perhaps help the artist, Iacopo Bruno. It’s a new part of the process for me, which I started on the previous as-yet unpublished manuscript (that was set on a distant planet).

I have to admit, I feel a touch pretentious whenever I talk about “my process.” But at the same time, I find it interesting and know that others do, too. If there’s a take-away, maybe it’s that I published my first book in 1986 and that my methods of working are in constant evolution. It’s not like I’ve figured anything out yet. I’m still groping in the dark, searching.

Here’s the one image that really stuck in my head for the fifth book. Check it, people: 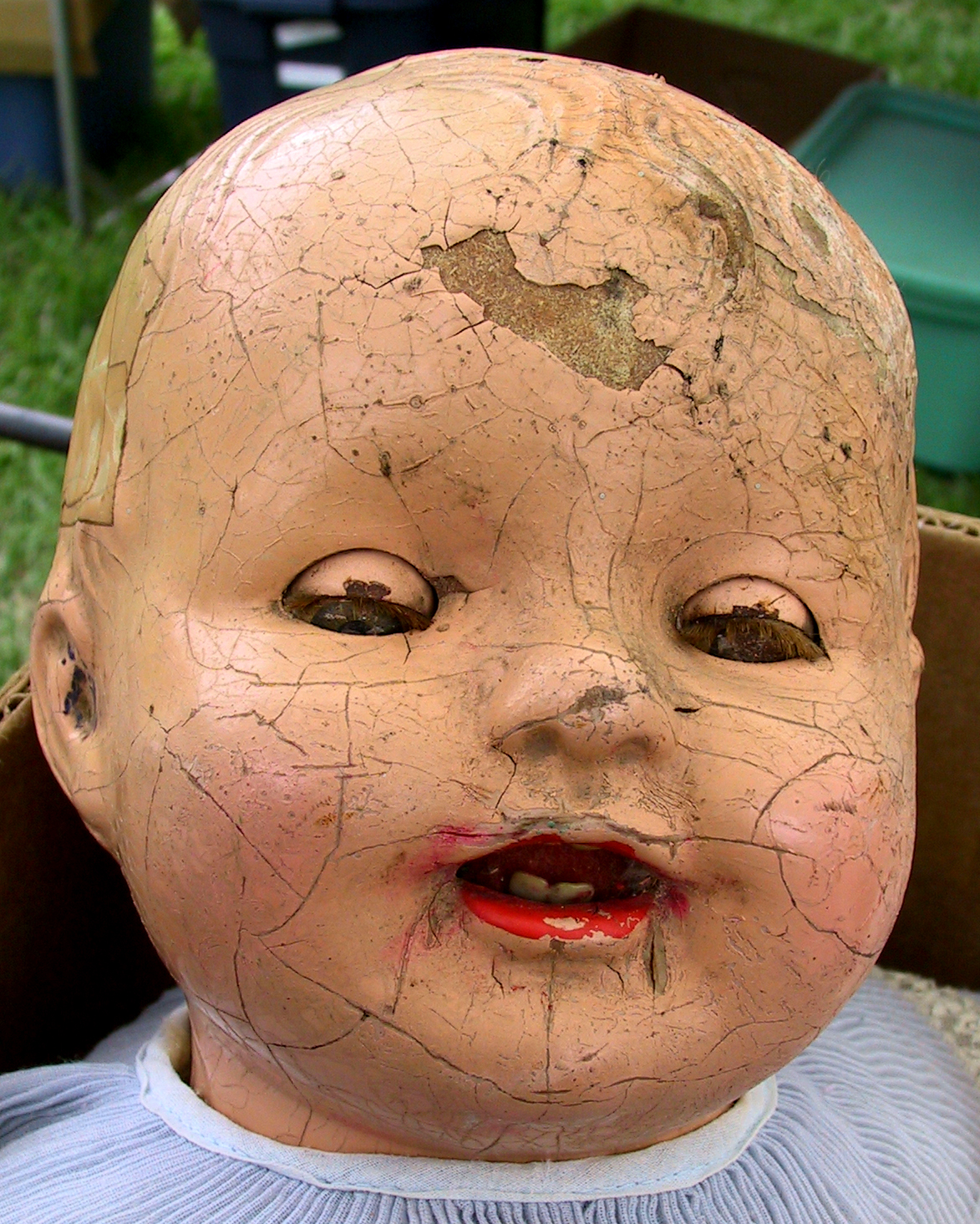 Don’t you love her? Don’t you want to hold her tight?

Or does she spell trouble?

Now maybe I shouldn’t do this, exposing my warts, but here’s a sample from the UNEDITED, UNCORRECTED manuscript I just handed in. The raw material. I think the scene explains itself, three kids, Malik and his little sister, Tiana, and a boy nicknamed “Soda Pop.”

“Treasure huntin’,” Malik drawled. “You can come if you want.”

Soda Pop scratched his round belly, thinking it over. He said, “Got nothing else to do.” And he followed along.

Tiana skipped to the lead. The boys talked about baseball teams and how the all-star game didn’t mean nothing any more. “My dad says it ain’t what it used to be,” Arthur said.

Malik mused, “I can’t think of anything that is.”

“Take a look what I got,” Arthur said. He pulled out a thick stack of baseball cards from his back pocket. The two boys paused there on the ragged sidewalk, dandelions popping up from the cracks, flipping through the cards and commenting on each one.

Malik peered down the road and there it stood in the distance, like a beaten fighter after fifteen rounds in the ring. The old place. A shivery feeling squeezed Malik’s heart like a sponge. “Come on,” he said, hurrying in the direction of the old place.

“Hold up,” Soda Pop said. He had dropped his cards to the curb.

“Not waiting,” Malik said. “Catch up if you want.” Off he went, walking fast, half running, in the direction of the old place. He called as he went, “Tiana? Hey, Tee? You holler if you hear me! Tiana, I’m not fooling around.”

Malik walked the length of the block and now stood staring at the old place.

The dusty yard was overgrown with tall grass and untrimmed bushes. The front was closed up –- no easy way inside – and Malik figured it was unlikely that Tiana was in there. But his heart still had that squeezed-out feeling.

“Tiana!” he hollered. “You best not be inside that house.”

Malik’s nerves jumped like live wires on the street. An inner voice told him, This is no place for a little girl. Find your sister right now.

Pasty-faced Soda Pop pulled up, bent over and wheezing, short of breath. “Anybody –“ pause, gasp – “ever told you –“ pause, pant – “you walk too fast?”

“Let’s check around back,” Malik replied, all business.

“I ain’t going back there,” Soda Pop said. “Not for a bag of gummy worms, I wouldn’t. You know what folks say. A widow lady went crazy in there, before we was born. They took her away, loony as a jay bird. Place is haunted. Nope, I’m not going back there.”

And he went off, careful not to pass too near the old place, still looking for his lost sister.

He found Tiana squatting in the dirt about fifty feet behind the house. The edges of her dress were dirty and soiled.

“For real,” Tiana said. “Come see for yourself.”

The girl held a short, thick stick. When Malik stepped up, he could see that she had scraped a gash about four inches deep into the earth. And sure enough, something was buried down there.

Malik got on his knees for closer study. “It looks like a piece of wood or –“

Malik turned to look at her. “How would you know?”

Tiana shrugged and blew a wild strand of black hair from her eyes. “I just do.”

That got him moving.

It took some digging, but the work went faster after Malik fetched a small hand shovel from home. Twenty minutes later, they unearthed an old wooden box about the size of a loaf of bread. There was a padlock on it.

The three children sat wilting under the sun, staring at the box.

“Why would anybody bury a box?” Malik asked.

“Locked shut, too,” Soda Pop said. “Must be something valuable inside.”

“It’s been nailed closed, too,” Malik said. “See here?” He pointed to the nail heads, two on each corner of the box.

Tiana grew quiet, eyes shut. When she opened them, the little girl said, “She wants us to open it.”

Soda Pop snorted. “What are you talking about, Tiana?”

Tiana blinked, mouth shut. There was a far-away look in her eyes. “Nothing,” she answered. “I didn’t mean nothing by it.”