perfect for fans of adventure novels

Gr 4-6–A simple family hike unexpectedly becomes a six-day struggle for survival for two children and their dog. Carter, 11, his sister Grace, 13, and their dog Sitka become separated from their father, who lags behind and suffers a heart attack at the trailhead. The siblings’ situation becomes dire when they realize they’re lost and Grace cannot walk after being severely injured in a fall. Carter sets out on his own to seek help, leaving Grace and 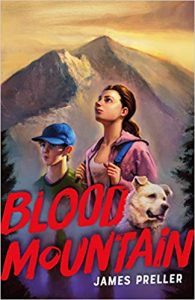 Sitka in the forest. Preller, best known for his “Jigsaw Jones” series, ratchets up the urgency, crafting additional threats that shadow the separated children, including a cougar on the prowl and a mysterious mountain man. The result is a page-turning adventure, skillfully using alternating points of view to give readers a direct line to each character’s heartbeat. Readers walk in characters’ footsteps thanks to the vividly realized setting. While both children experience an epiphany regarding their place in the natural world, it’s the strong supporting characters who round out the novel. D.E.C. Ranger Makayla provides fascinating survival facts and mountain man John embodies the novel’s themes of non-materialism and finding oneself. Occasionally graphic, consistently suspenseful, this title will make a lasting impression with an emotionally stirring and complex conclusion. VERDICT A thrilling purchase for middle grade collections; perfect for fans of adventure novels by Jean Craighead George, Peg Kehret, and Gary Paulsen.