FAN MAIL WEDNESDAY #295: When Joseph Basically Asks Me to Do His Homework

It happens often enough that just about every middle grade and YA author has experienced it. The ever-so-brief fan mail from a student that turns out to be an indirect request to do their homework. On one level: Resourceful! On another: Hey, you’re not fooling me, I see what you are doing, think for yourself!

Over the years I’ve responded differently, depending on my mood. For this one, I felt chatty and gave an honest answer. Yes, I wanted a good grade! When I received Joseph’s response, I realized I probably let him down. Oh well! You’ll see.

Here’s the first note from Joseph:

Hello, James. I am a fellow student who’s in high school in my sophomore year, I was curious to ask some questions about your book, THE FALL. I wanted to know what type of rhetoric device fits well in this story?

Ha, Joseph, I am so glad I’m not in high school anymore. I would have failed this assignment!

There are a lot of different rhetorical devices in the world, most of them I’m not ever consciously employing. Asterismos and eutrepismus, hypophora and parallelism, procatalepsis and tmesis.

Can you tell I had to look all those up? I mean, I’m pretty sure I’ve used them at different points in my career, but not quite knowingly.

I think a lot of what we do as writers becomes instinctive, based on years and years of reading. You kind of eat it. Digest it. Absorb it and internalize all those storytelling strategies. So when you are telling your own story — trying to communicate — you just reach for whatever tool seems handy at the time. 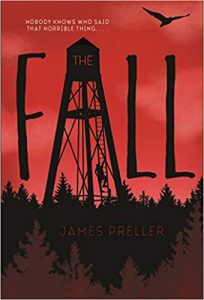 The biggest conceit to The Fall, the Big Device, is that it’s presented as if it were Sam’s journal entries. He’s recounting the events to himself as a way to understand this really big and terrible thing that happened. He’s processing and, in turn, owning responsibility for his role in Morgan’s tragedy. As readers, we are looking over Sam’s shoulder, going through that experience with him.

Another device that comes to mind, which I used in one spot of the book, the “Not Me” chapter, is that Sam writes as if he’s on trial, addressing the jury. And you, the reader, of course, are on that jury. I didn’t carry that device throughout the book — I think it would have felt forced — but it seemed right at the time. And as readers, we are making those judgments of each character. Sam is acutely aware of being on trial.

Sam includes a few of his own poems, the way someone like Sam might. Maybe there’s a name for that, maybe it’s a rhetorical device, I don’t know. I just wanted to show Sam’s depth of feeling, how this stuff was pouring out of him, how he thought and felt, and the simple poems, again, seemed right for this journal format. It’s what I did as a kid in my journals, anyway.

Hey, Joseph: You forgot to tell me how much you loved the book! Don’t you know that’s how you are supposed to begin these letters? It’s a rhetorical device called “blowing smoke up someone’s butt.” Writers love that stuff. It gets our attention! And we immediately think, “What a smart young fellow!”

Next time: 1) Begin with a compliment; then 2) Ask me to do your homework!

(By the way, the above numbering technique is an example of eutrepismus, separating speech into numbered parts. We all do it, but 99% of us have never heard the name before. That’s writing, I think.)

Joseph politely replied the next day:

Thank you so much! So sorry, but this book was inspiring though haha! Its just I had include one Rhetorical Devices. those are 1. Repetition 2. Parallelism 3. Slogan and saws 4. Rhetorical questions

I had to choose one of them and explain why I chose it and how you used it in this book.