My Boys Never Did This

It was a busy weekend. Around here, that’s like saying the ocean was damp. It’s how we roll.

On Sunday, I dropped Maggie off at her AAU basketball’s coach’s house in Castleton at 9:00, because she had a 10:00 practice in Troy and I couldn’t get there, since I had to be in Schenectady to coach a travel baseball game at 10:30. It was my son Gavin’s team, but he wasn’t able to be there because he was spending the night in New Hampshire (taken by my wife, also in NH) for a Regatta. Gavin recently joined the Albany Rowing Club, you see. The college-age son, Nick, visiting for the long weekend, picked up Maggie at the end of practice and brought her out to lunch and then, finally, home.

By the time I returned, everyone was gone. Maggie to her friend’s house, Nick at some other place. I don’t believe my family is all that different from anyone’s else. We’re all running around. That’s not the point of this post anyway.

On the kitchen counter, I found this pad. 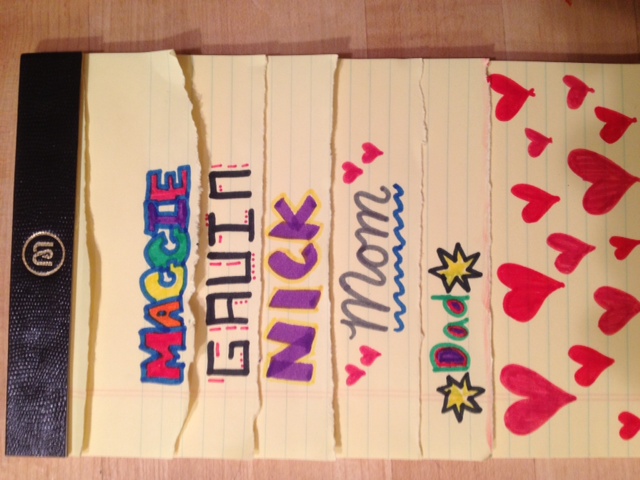 (Sorry for the sideways shot, it’s one of the kinks in the Apple dynasty, an impossible thing to solve — the ordinary photo sent from an iPhone that shows up sideways on certain blogs.)

Obviously: Maggie was home alone, grabbed some markers and the nearest pad, and wrote out the names of everyone in her family. It wasn’t a gift, it wasn’t intended for anyone. Just something she did to pass the time, the names of the folks she loved, made to look pretty.