BYSTANDER: A Shout Out to Led Zeppelin’s “Communication Breakdown”

Eric Hayes, the main character in Bystander, plays guitar. He’s also missing an absent father, who occasionally sends CDs in the mail. Here’s a brief excerpt from Chapter 4, the first time that subplot is explored. To set up the scene: Eric’s father calls the family at their new home, five hundred miles away. The conversation does not go well; 13-year-old Eric is uncommunicative. The phone call ends.

Eric looked at the phone in his hand, shot daggers at his mom, snapped it shut. He went into the kitchen, looked for something to eat. A bowl of Rice Krispies, some pretzels, anything.

His mother barked something about dinner being almost ready, and not to spoil his appetite. Rag, rag, rag. So he grabbed his iPod instead,  slid open the back door, and parked himself in a lawn chair. Eric turned the music up, let it pour into him, fill him up. He had downloaded the songs from his dad’s CDs. Eric did not curse, or cry, or seem to feel much of anything. It was all just a swirling mass, a crazy mess inside his numb skull. He closed his eyes and heard Led Zeppelin guitarist Jimmy Page pick out the first notes of “Communication Breakdown,” rapid-fire like a machine gun on the open E string, before hitting three big chords, D-A-D. Then singer Robert Plant’s siren wail: “Hey, girl, stop what you’re doin’!”

It had rained and some worms crawled from their holes out onto the brick patio. Eric grabbed a stick and idly poked at one, turning it over. That’s how he felt, he decided. Just like that worm. Pushed around, prodded by a stick. After a while he’d crawl back into his hole. And then, in a few days, off to school. A new hole with red bricks and homework.

It would be a fresh start. A new beginning. Isn’t that what his mom said? New and improved. Guaranteed or your money back.

I hit on that particular song, “Communication Breakdown,” for maybe too obvious of reasons. But ignoring the song’s title for a minute, it’s on the first Led Zeppelin LP. I remember listening to that album as a young kid, staring at that cover — which depicted, I later learned, the 1937 burning of the Hindenburg airship. This was probably around 1971 or so, when as the youngest of seven I reveled in my siblings’ record collections. It wasn’t classic rock back then; it was brand spanking new. 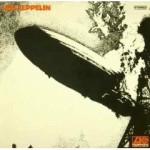 Though I’m not a musician, my character, Eric, played guitar — so I knew he’d hear it differently than I did. Eric would understand the notes, what Jimmy Page was doing. I figured I’d have to look up the tabs, maybe describe it through Eric’s ears, the way a musician might hear it.

That’s when I learned that part about the open E string. Then those three fat chords: D-A-D.

Perfect, right? It could have been G-F-G, or whatever, and that’s what I would have typed. I’m glad it worked out way better. A happy accident.

Note: If you want to rock, stick around for the solo, at 0:49. Can’t wait for my Gavin, age 10, to learn how to play this all the way through, and believe me, it’s gonna happen. The kid’s got talent.

By the way, came across this review today. I’m always glad when they spell my name correctly:

“Preller displays a keen awareness of the complicated and often-conflicting instincts to fit in, find friends, and do the right thing. Although there are no pat answers, the message (that a bystander is hardly better than an instigator) is clear, and Preller’s well-shaped characters, strong writing, and realistic treatment of middle-school life deliver it cleanly.” — Booklist.