Tag Archive for The New Yorker

About Those Teacher-Parent Conferences . . .

I enjoyed this cartoon from The New Yorker and so should you! 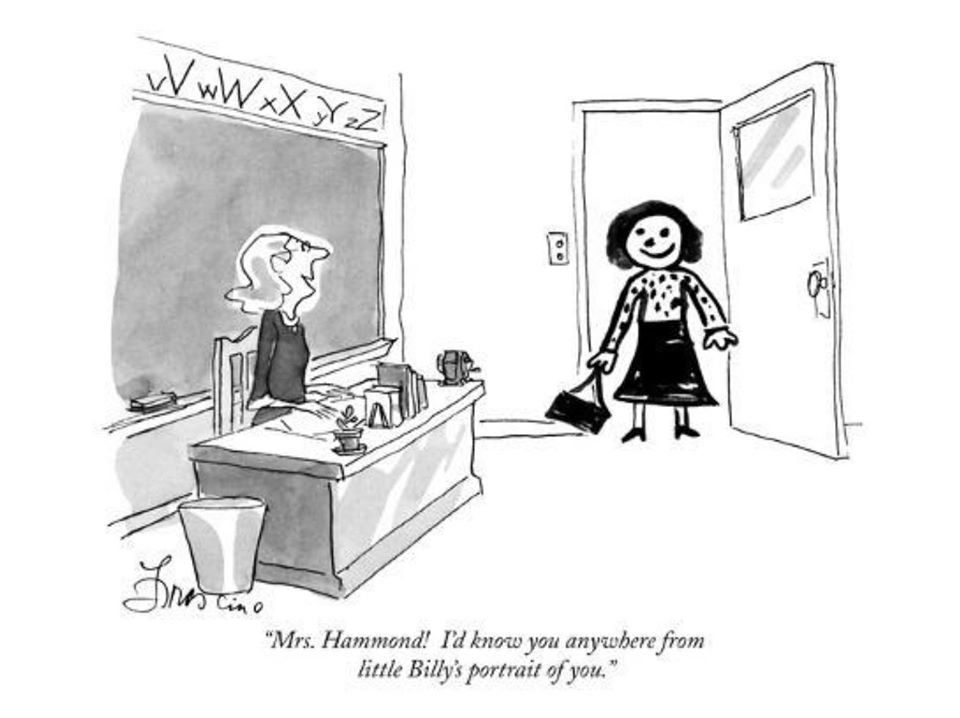 As a parent of three children and an attendee of these conferences, I ultimately wanted to know one thing: when the teacher talked about my kid, described various qualities and characteristics, I wanted to recognize that as, yep, that’s my kid. We were both talking about the same individual. And once we had that basic agreement — this teacher had an understanding of my child — I felt relieved and at ease. The rest was just stuff.

In a nutshell: show me that you “get” my kid.

Category: Around the Web / Tags: Parent-teacher conferences, The New Yorker

The good folks at The New Yorker, still my favorite magazine after all these years, put together a selection of signs made by children and carried at the September 20th climate change protest in NYC. 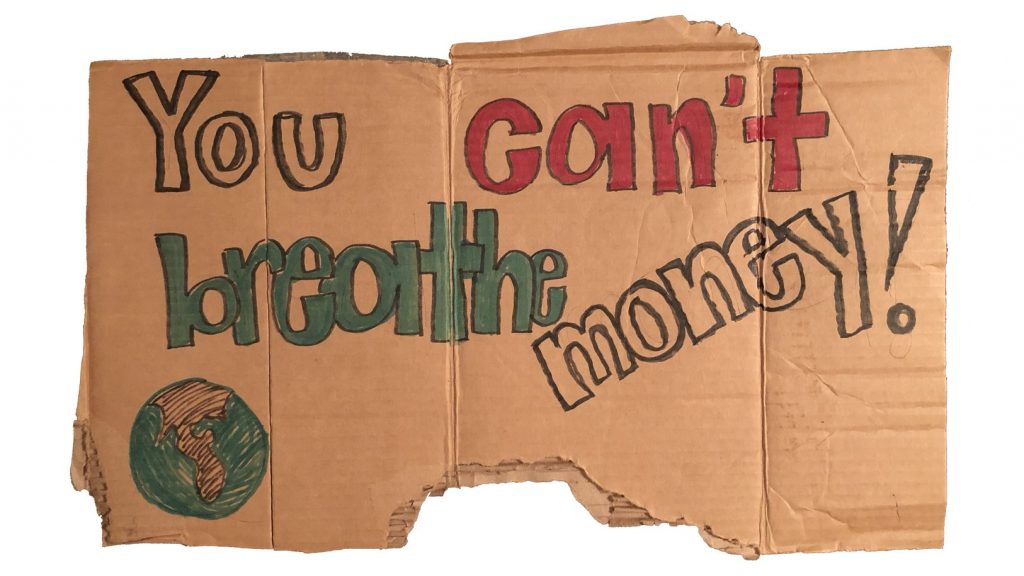 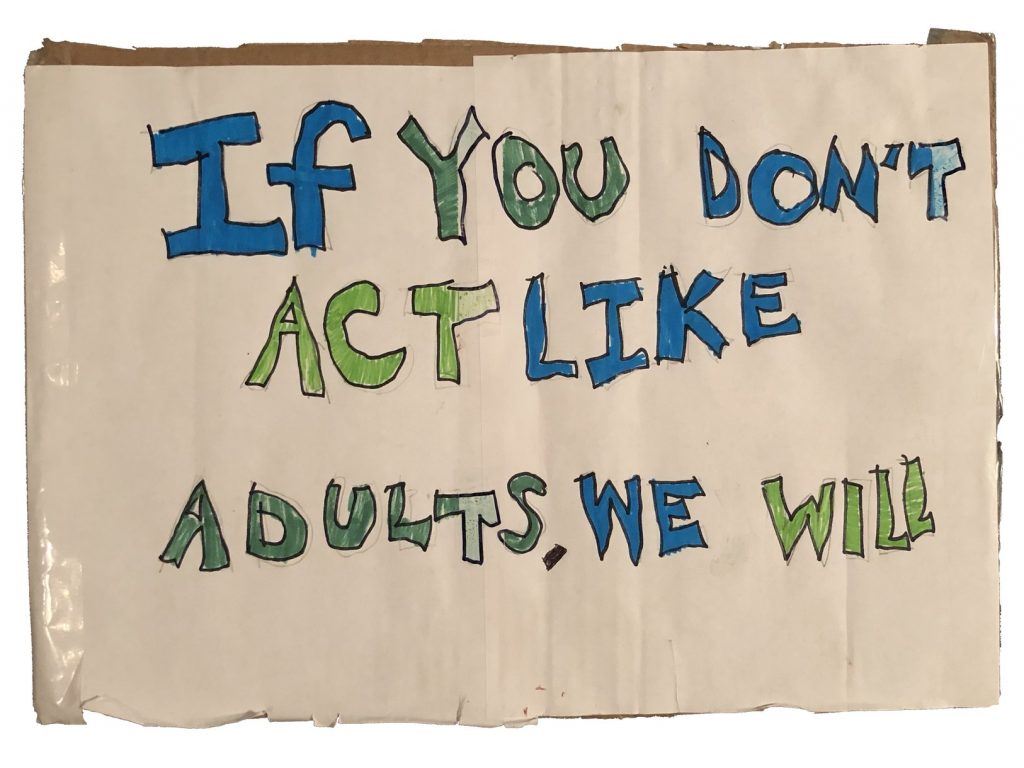 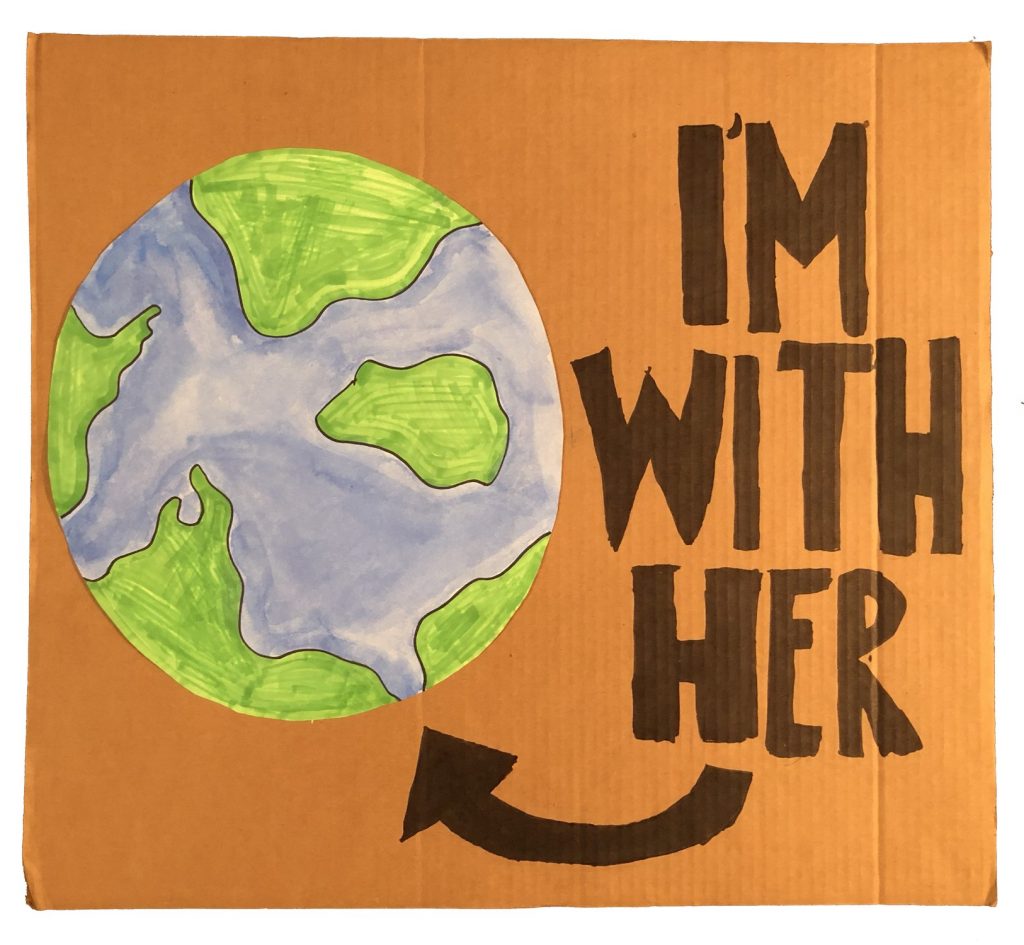 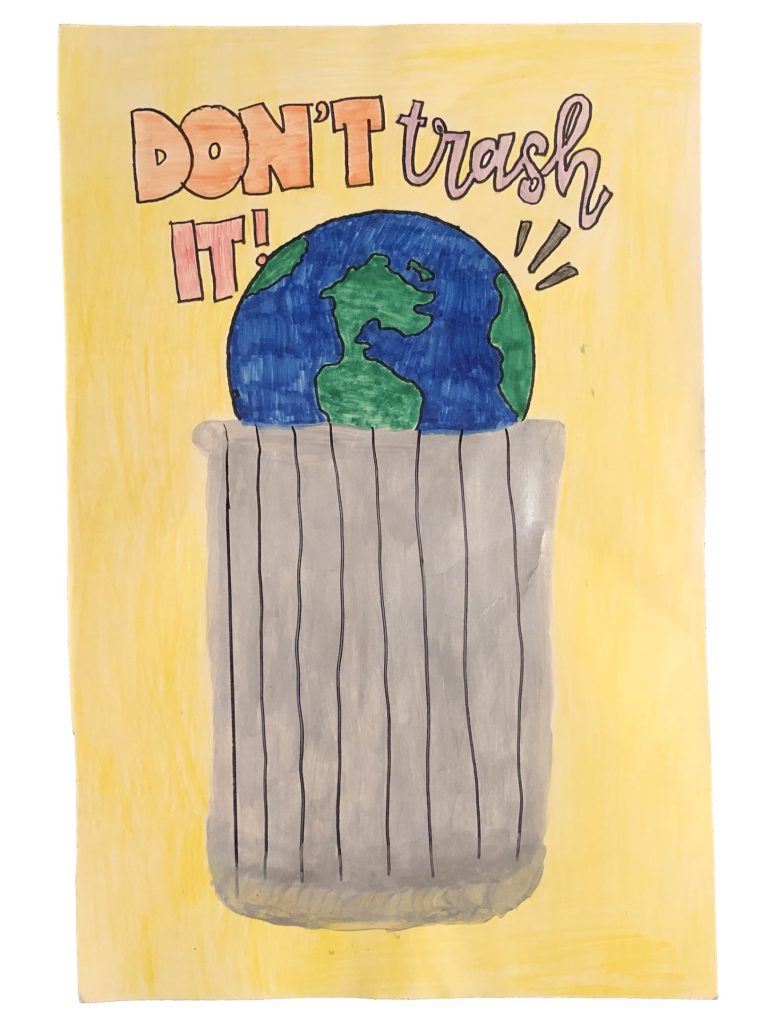 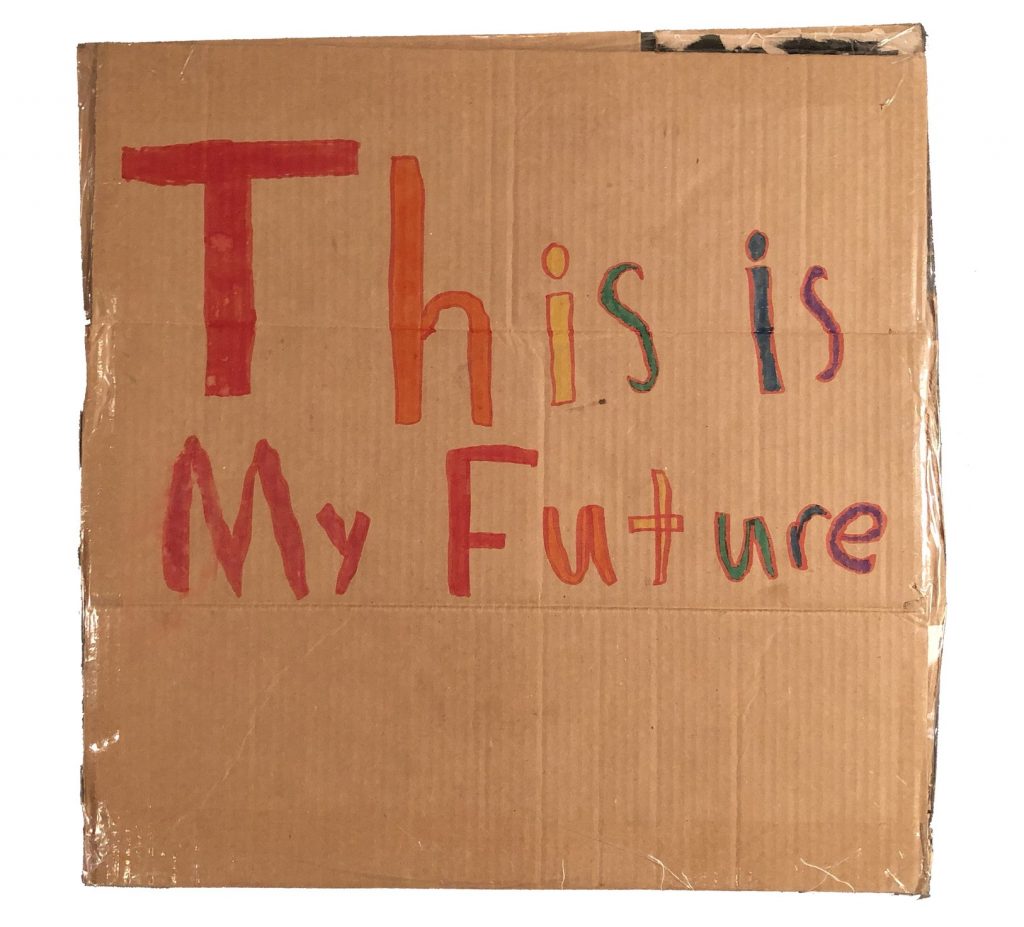 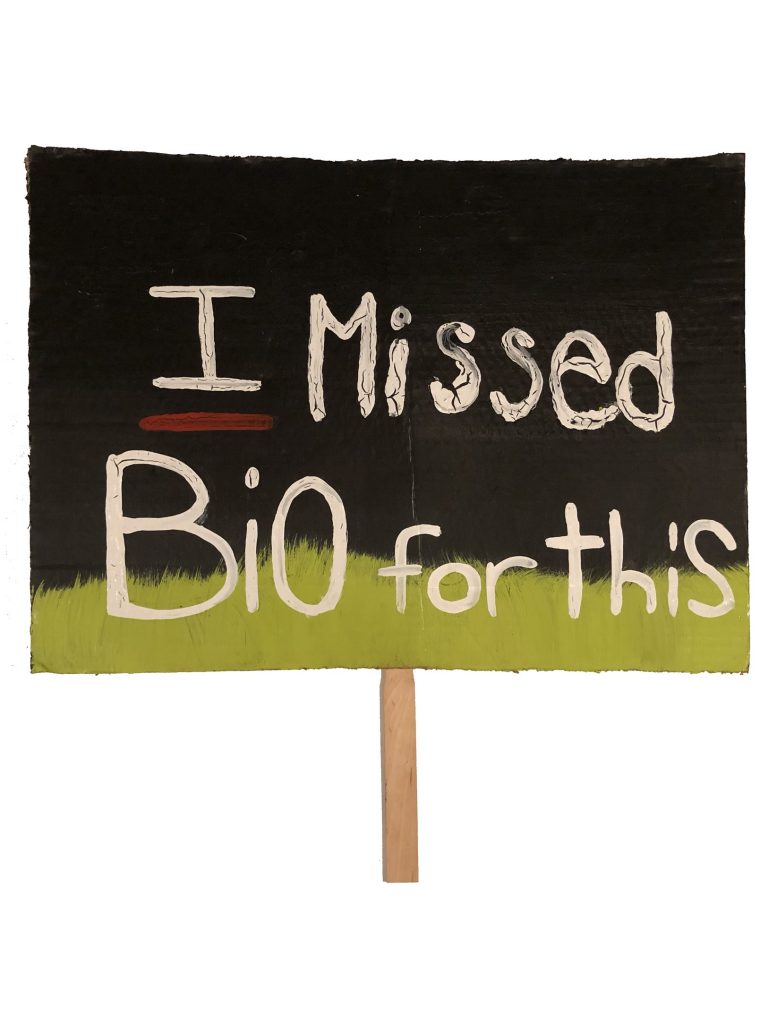 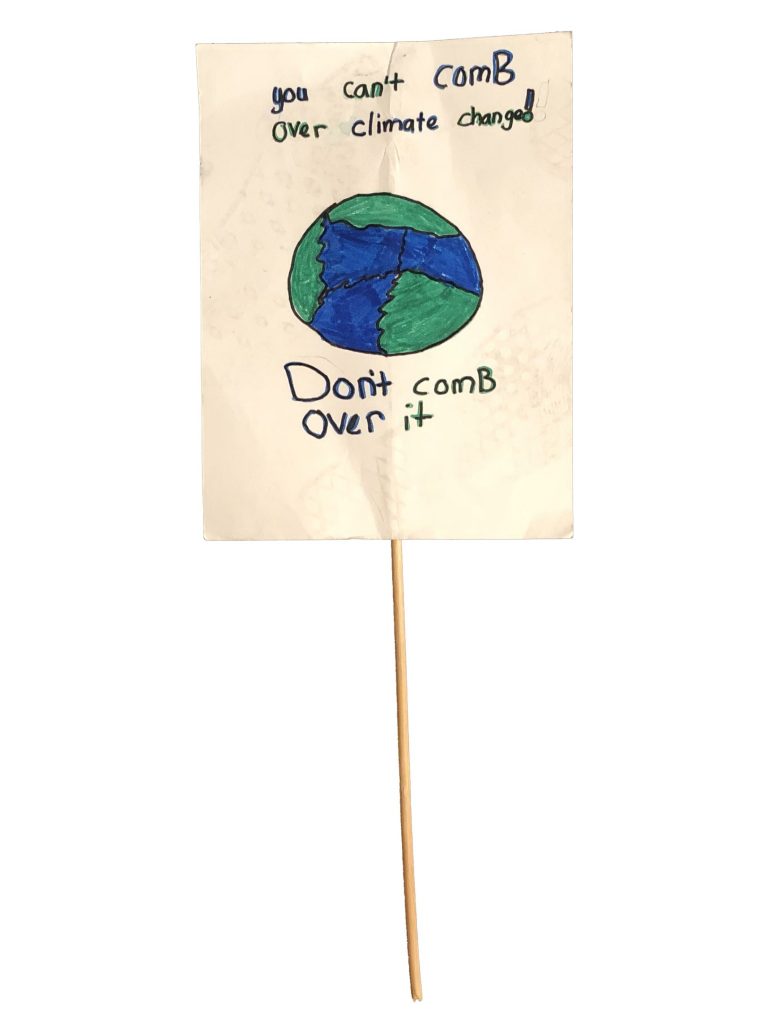 The Koch Brothers, The Wizard of Oz, and the “Data Collectors” in BETTER OFF UNDEAD

The Koch brothers were my initial inspiration for the evil billionaires in my new middle-grade novel, Better Off Undead (Macmillan, 10/31/17). I simply thought of the worst people I could possibly imagine and there they appeared in my daily news feed, a pair of oligarchs lusting for power. It didn’t 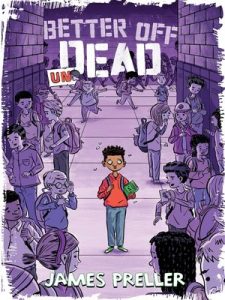 take a huge leap of the imagination from there. To me, the Koch brothers represent the most dangerous qualities of corporate greed and excess, using their unfathomable wealth to undermine the ideals of American democracy by pouring hundreds of millions of dollars into elections, buying political favor, and influencing policy for their own personal gain.

But my book characters, the Borks, are not merely stand-ins for the Koch brothers. There are other troubling forces in the world today. While the Koch brothers made their fortune from fossil fuels, I took a tip from the social media and decided to turn the Borks into “data collectors.” I’d been thinking a lot over the past few years about privacy issues, the monetization of the world wide web, and all those unwitting people (myself included) staring at phones: clicking, scanning, scrolling, flicking, giving it all away.

In this week’s New Yorker, Adam Davidson, writing about the Internet of Things, turned his focus to Amazon. I found these words remarkably similar to a speech I gave to Kristoff Bork in Better Off Undead (see below). Here’s Davidson:

For most of its existence, Amazon has made little or no profit. In the early days, it was often ridiculed for this, but the company’s managers and investors quickly realized that its most valuable asset was not individual sales but data — its knowledge about its loyal, habit-driven customer base. Amazon doesn’t evaluate customers by the last purchase they made; instead, customers have a lifetime value, a prediction of how much money each one will spend in the years to come. Amazon can calculate this with increasing accuracy. Already, it likely knows which books you read, which movies you watch, what data you store, and what food you eat. And since the introduction of Alexa, the voice-operated device, Amazon has been learning when some customers wake up, go to work, listen to the news, play with their kids, and go to sleep.

Now here’s a snippet from a scene when Adrian first meets the sickly, sinister Bork brothers. The book loosely models its structure on The Wizard of Oz, so think of this scene as the first time Dorothy, Lion, Scarecrow, and Tin Man meet the great and powerful Oz. (And, yes, that’s a little bit of Faulkner there are at the end.) Adrian speaks with the loudly amplified brothers via a huge television screen. 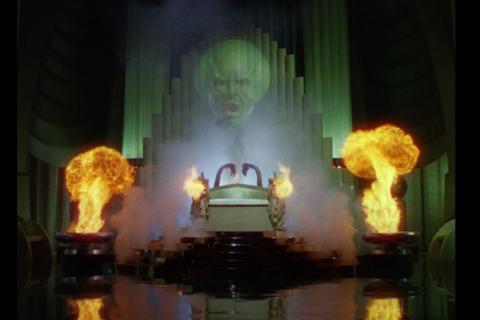 Kalvin fell into a spasm of coughing. His head flopped and lolled from side to side. Kristoff seemed to lean away from his brother, repulsed, a look of disgust on his face. Then his eyes returned to me, the way a sharpshooter zeroes in on a target.

“Have you any idea what we do, boy? How we made our billions?” Kristoff didn’t wait for my answer. “I’ll tell you. We collect flashes of light, waves on computer screens, whispers in the dark corridors of the Internet — clicks, likes, comments, purchases, page views — in sum, we gather your digital footprint. But not only yours, Adrian. Don’t think you are so special, boy.”

Kristoff’s lip curled. “Words, only words. But very well, Adrian. As you wish. We own the data. Like farmers, we reap what you sow. Then we sort and organize and sell in algorithms that are beyond your meager comprehension. In the end, we already own you — you’ve been bought and sold like a piece of meat.”

Kristoff smiled ruefully, as if conceding the point. “We own only the digital footprint you so freely give away. Adrian, if you post a photo, we have a copy. If you send a text, we capture that, too, like a butterfly in our net.”

“That’s illegal. It’s private,” I said, surprised by my own anger.

“All your data points are known!” Kristoff’s voice now rose in volume and venom. “To the world, you are only digital code, lines of ones and zeros signifying nothing. We’ve been where you’ve clicked, we’ve watched when you’ve blinked. We know what you buy, what you wear, and even what you secretly desire — often before you yourself are aware of it.

“There are no secrets from the data collectors.” 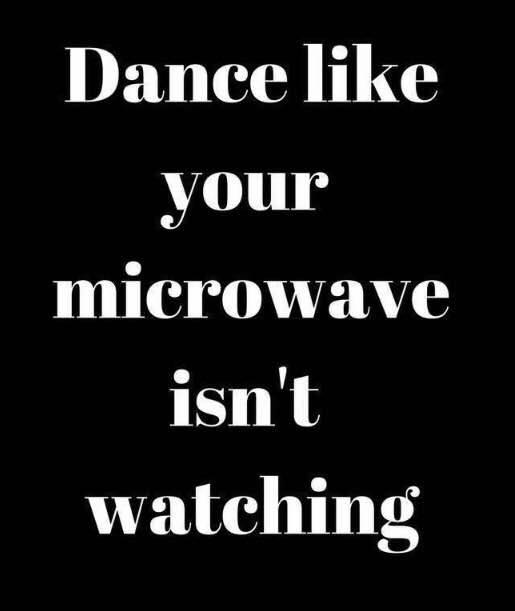 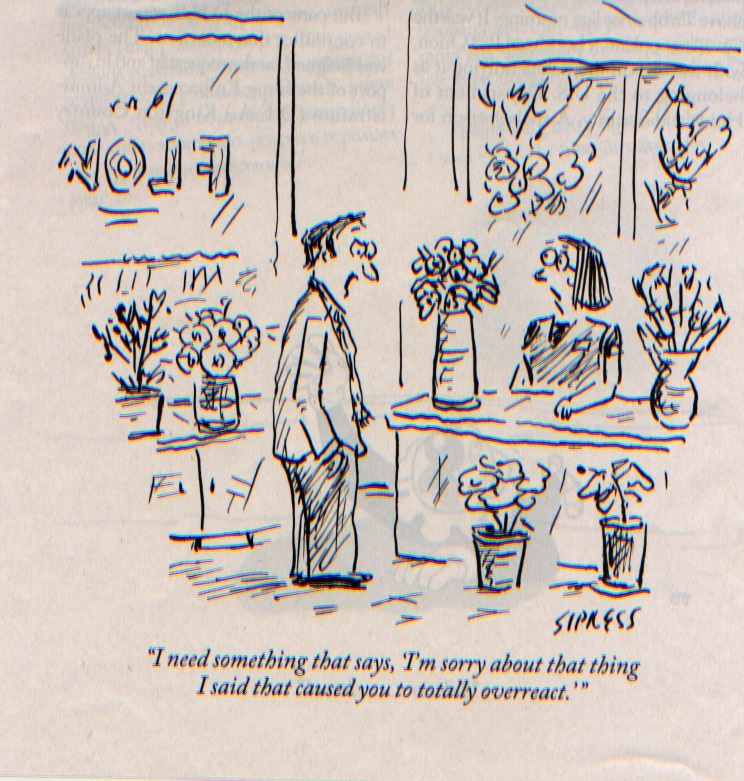 This cartoon from The New Yorker by David Sipress perfectly captures one small aspect of my domestic life. I handed it to Lisa and she exclaimed, “That’s us!” The man’s cluelessness, the wife’s (over)reaction to his cluelessness, and the lack of satisfying resolution. Lisa seeks closure; I contend that it’s myth: so we go round and round. It’s the dance we do. But at least we’re dancing, and still laughing about it. 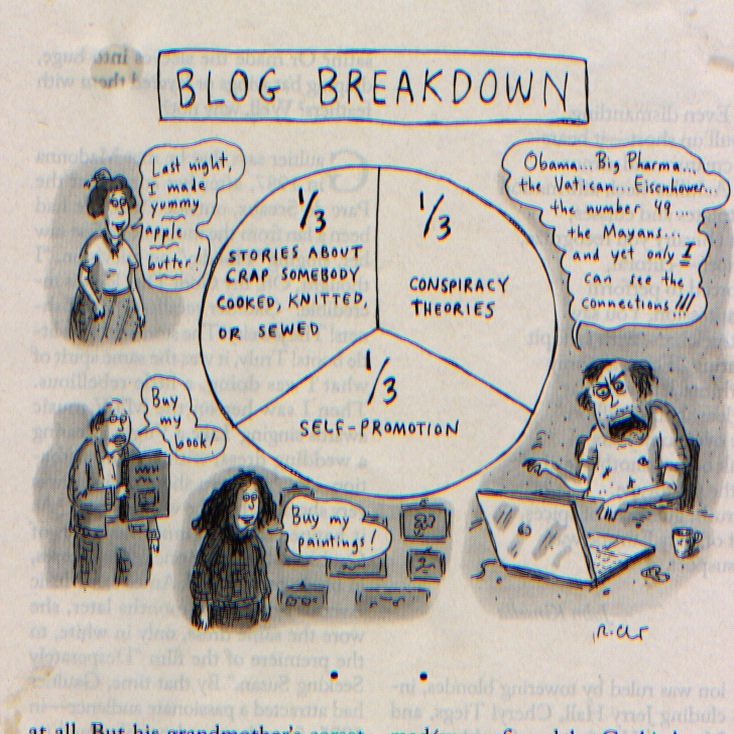 Snagged from the Sept. 26, 2011 issue of The New Yorker, by Roz Chast. Coincidentally, Chast became a staff cartoonist to the magazine in 1979, the year I graduated high school. It’s like she’s always been there, and I’m grateful for that; I like her work a lot.