We’re back with the 3rd installment of “5 Questions 2.0” — the new & improved interview format that invites some of the best folks in children’s literature to answer five — and only five! — questions. 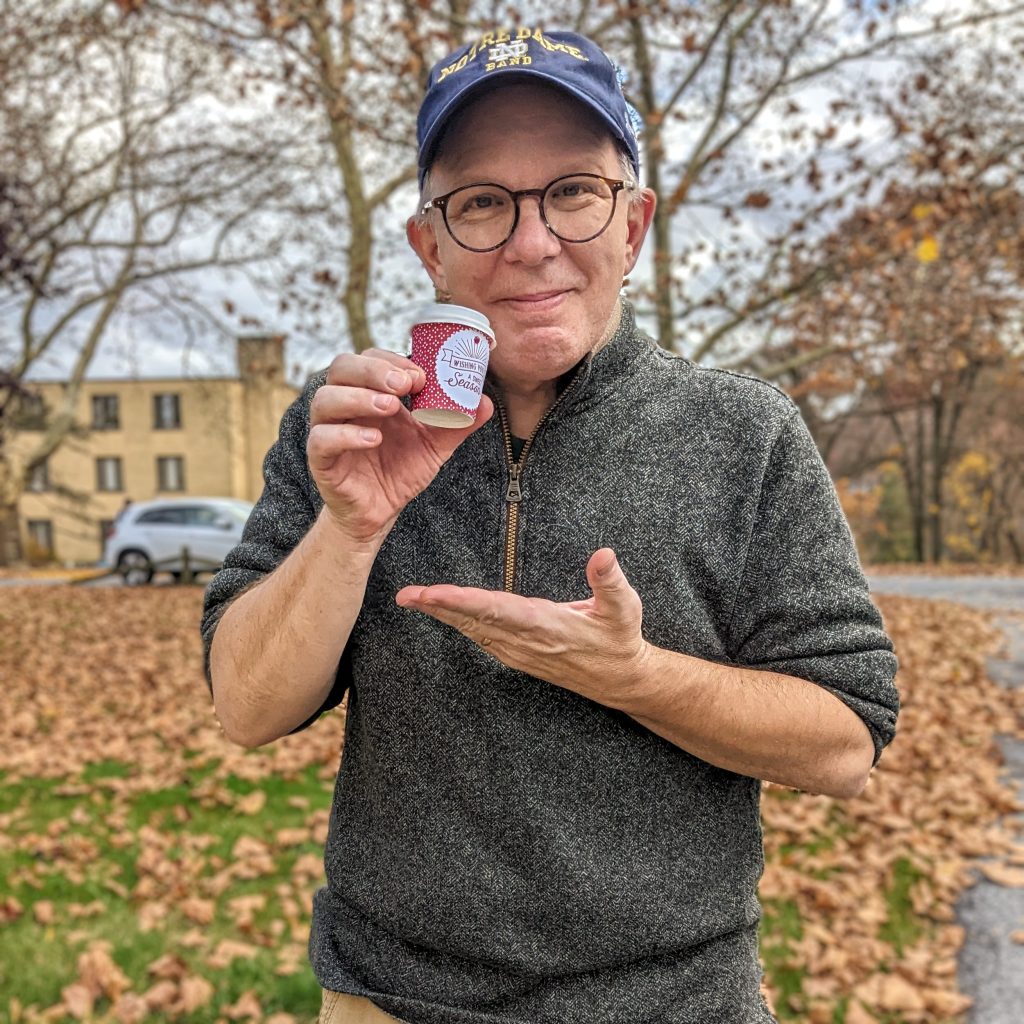 1. Hey, Paul. I loved Danny. This entire novel seems like your attempt to write a perfect “rom-com” for younger readers. What are the basic story elements of a romantic comedy anyway?

Thanks, Jimmy! I’m really glad you enjoyed Danny Constantino. I’ve always loved romantic comedies. Probably because my real-life attempts at romance are generally comedic.  Either way, I had a lot of fun writing the book. As far as rom-com structure, I subscribe to the model described by screenwriter Billy Mernit in his excellent book, Writing the Romantic Comedy. For basic elements, the “meet cute” –- when the inevitable couple crosses paths in a generally clumsy and slightly adorable way –- is a classic requirement.

Before that, however, there’s got to be a set-up that shows how a protagonist’s deepest internal desires (e.g. true love) might be at odds with their external goals (e.g. fame, money, success). From there, the meet-cute leads down a slippery slope of tests, successes, failures, and embarrassments because characters won’t choose one thing or the other until they are humiliated, beaten, broken, and generally wrecked. But it’s okay because it’s all for comedy. I mean love!

In the end, there is a “joyful defeat,” which means that at least one character will have to give up something of real value (e.g. fame and fortune) in order to earn an even more valuable prize (e.g. true love!). Of course -– just like in “Frozen” or “My Best Friend’s Wedding” -– romance is not always a necessary or final outcome, which makes me think… NO ROM, JUST COM would be a great title! 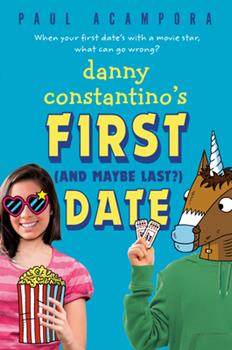 2. If you can think back to Paul as a kid — say the 5th grade, 6th grade version of you — did you have a lot in common with Danny, the main character in your book?

You are asking about a time and a galaxy that’s long ago and far away. We’re talking about a pre-Star Wars era. I was already a huge sci-fi fan (I still am!), and I was obsessed with things like NASA and Starlog Magazine and missions to outer space (STILL AM!) In addition to my nerdy geek vibe, I played the piano several hours a day, read voraciously, enjoyed science and math, and loved hanging out with my grandparents. I remember that some of my classmates –- especially girls –- started to seem confident and knowledgeable and attractive. Like Danny, I did not think that I was any of those things. I could barely walk across a yard without tripping over myself. I did not feel like much of a catch. At the same time, I had several really great friends -– both boys and girls –- and we all just kind of accepted one other for whatever we were. In retrospect, we were kind of awesome. But, like Danny, we didn’t know it. 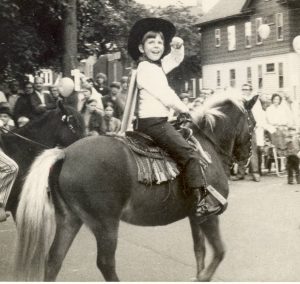 Oh, I loved that answer. Now this doesn’t technically count as a question, but: It must have been a good day when you decided the bus driver’s name was Shad.

Definitely yes! One of my daughter’s high school friends was a kid named Shad. His name went into my notebook the very first time I met him. I was just waiting for the right character to arrive so I could press Shad into service. Thanks, Shad! 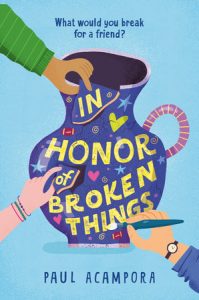 3. You timed this book’s release just right the for world wide pandemic. Do you have any other marketing tips for us in the biz?

My biggest marketing success came with a novel I wrote a few years ago called I Kill the Mockingbird. It’s about a group of kids who sabotage their summer reading list. The story revolves around Harper Lee’s classic, To Kill a Mockingbird. Not long after my book came out, Harper Lee died. My sales rocketed up the charts. Her passing was a marketing coup. Please note that the marketing department at the publishing house had nothing to do with this effort. 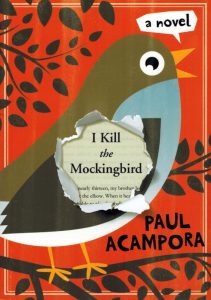 4. Ha, yes. Let’s keep a close eye on that scarily ambitious intern in publicity! You have so many gifts as a writer — humor, warmth, decency, pace, a sense of family &community — plus crackling, clever, unforced dialogue. There’s a lot of chatter in your books. It reminds me of that great writing tip by Elmore Leonard, “Avoid the parts that readers tend to skip.” What do you try to keep in mind when you are writing dialogue? I mean to ask, I guess: How do you do it?!

Thanks! Dialogue is my favorite thing to write. A long time ago I wanted to be a playwright. I think I learned about dialogue from reading scripts and then hearing the words come to life in performance. And with actors, they really do come to life. The difference between Shakespeare on the page and Shakespeare on the stage is like the difference between sticking your hand into garbage versus pushing your fingers down a garbage disposal.

Okay, that might not be the best metaphor. There is garbage in Shakespeare (“What rubbish and what offal!” – Julius Caesar, Act 1, Scene 3; “Let it alone, thou fool. It is but trash!” – The Tempest, Act 4, Scene 1), but his work is mostly painless. Mostly. My point is that the page is not always a friend to drama. Even if you’re Shakespeare. Which I am not. (In case anybody’s wondering.) But since novels rely on a cast that lives inside a reader’s head, I think a lot about how I can control the drama within every scene. For me, dialogue provides the best opportunity to do that. Rhythm and pacing and the sounds of words and sentences are just as important as whatever a character is talking about. I think there’s a lot to learn from pop songs (both words and music), stand-up comedy, and also the unbelievably tight writing that television (both comedy and drama) requires.

As far as techniques and strategies, my first drafts are often nothing but dialogue. I try to write them really fast so that characters can just talk without thinking. That back and forth is where conflict and plot come from.

After that, I revise about a million times so that the story can have things like settings and inhaling and clothes. (Pro tip for aspiring middle grade writers: Middle school teachers and librarians prefer characters who are clothed.)

One day I’d love to write something like Roddy Doyle’s The Commitments in which dialogue pretty much carries the entire storytelling load –- action, conflict, characterization, pacing, plot, plus tons and tons of humor. Being Irish might be a requirement for pulling that off. See “Derry Girls” for confirmation.

An aside: Funny coincidence with the mother as a high-powered real estate agent. I gave that job to the Adrian’s mother in Better Off Undead. It’s the perfect profession for a distracted, not-always-there mom. And it struck me as funny for a kid to keep seeing photos of his absentee mother on lawn signs everywhere. Danny’s mother hands out coffee mugs with the slogan, “Everything I touch turns to SOLD!”

But that’s not a question either, technically, so let’s move on. Forget I said anything.

My Uncle Joe was a very successful –- and very intense –- real estate agent. My soapbox derby car was a rolling billboard for his agency. I also promoted the firm by wearing a sandwich board while riding a pony in the annual Bristol Connecticut Mum Festival Parade. There is photographic evidence. 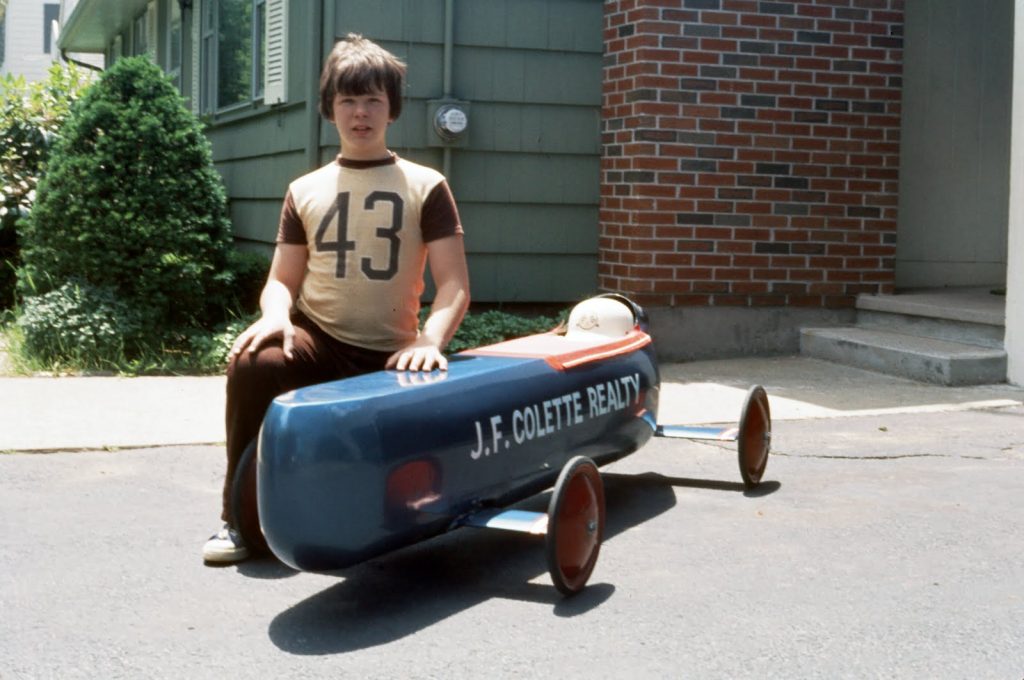 5) You’ve published 7 novels and still maintain a full-time job. Smart! What does the writing life mean to you, just in terms of being a person in this world? Why bother? Wouldn’t it be easier to, you know, not? What does it give you, do you think?

There is certainly a part of me that dreams about having “the writing life” as my primary career, but if I’m being honest I’ve always been a little afraid of walking away from the security and freedom that a regular paycheck provides. Plus, I’ve always had a good time at my different day jobs, which have been challenging and rewarding in their own unique ways. That said, a day job definitely takes great gobs of time and energy away from writing, and I am occasionally tired and cranky. 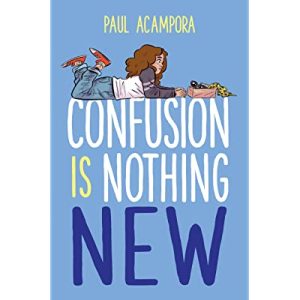 In theory, life might be easier if I stopped writing, but life never follows my theories. I’m sure I’d fill the time with some other obsession. I already dabble in music, photography, podcasts, film making, hiking, cooking, gardening, board games, brew pubs, and, of course, tons and tons of reading. All of those exercises and activities give me a chance to look closely at the world in different ways. Writing gives me a reason to look closely at the world in all the ways. If I do it well enough, I get to share what I see and, even better, be in a conversation with other people who are curious about the world. Of course, staying committed to this one particular passion requires giving up on other things. So far, it’s been a worthwhile trade-off for me.

In truth, every successful writer I know is in the middle of one long trade-off. Some might call it a “joyful defeat.” So basically, the writing life is a rom-com. I hope Kurt Russell and Goldie Hawn will play me and my wife in a Wonderful World of Disney+ streaming version (Working title: 10 THINGS I HATE ABOUT FONDUE). You’ll get Colin Firth and Charlize Theron on HBO Max when they do you (Working title: JIGSAW IN LOVE). I hope you’ll invite me to the premiere! 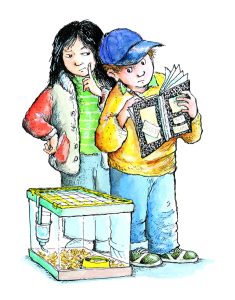 JAMES PRELLER is the author of many books for young readers, including Bystander and Blood Mountain, as well as the popular Jigsaw Jones mystery series, along with the “Scary Tales” and “Big Idea Gang” series. Look for his strange & mysterious middle-grade series, EXIT 13, on Scholastic Book Fairs and Book Clubs. It will be available in stores in February, 2023.