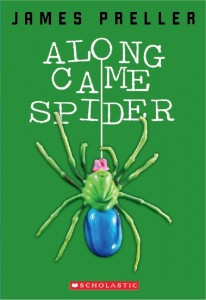 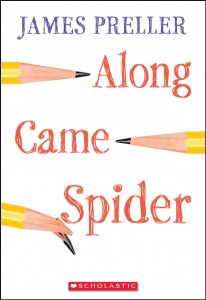 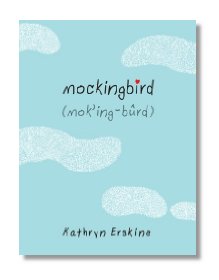 School Library Journal recently ran a review for Along Came Spider. Written by Elizabeth Swistock, you can read it in full by clicking wildly right here and scrolling insanely downwards.

I think Ms. Swistock gives an accurate, sympathetic review, while noting that “several of the traits that Preller describes could be associated with autism spectrum disorder, but Trey’s condition is never stated outright.”

Not naming Trey’s condition was a conscious choice. Maybe that was a mistake on my part, I don’t know. But for the record, I saw Trey as a boy with high-functioning Asperger Syndrome. What I felt at the time, correctly or not, was that most kids wouldn’t perceive things that way — they’d be dealing with the near reality of a quirky boy, not an abstract label, so I tried to hug close to that perspective. In today’s inclusive classrooms, these are daily encounters for most children.

By the way, here’s one of the many great books I found on the subject, Perfect Targets: Asperger Syndrome and Bullying, by Rebekah Heinrichs.

For the purposes of Along Came Spider, I didn’t see the behaviors exhibited in the book as “bullying” per say, since I hate to see every incident of like or dislike — or even one-time acts of physical violence — thrown under the notorious bullying umbrella. Vast topic, too big for this entry. I’ll have a lot more to say on that later, when we get closer to the publication of Bystander (Feiwel & Friends, Fall, 2009), a dramatic novel that takes a closer look at bullying in a middle school environment

The interesting part of the review comes at the end (doesn’t it always?). Ms. Swistock concludes:

The fact that Trey and Ava are extremely self-aware and kindhearted is a redeeming quality, but the book could prove too uneventful for its intended audience. That’s too bad because Trey is a sweet character and Preller’s message is a good one.

I want to repeat the key phrase there: too uneventful for its intended audience.

Let’s be clear: I have no argument with the reviewer. She very well may be correct. It’s not been a huge seller. Though it is a book about boys — that also features strong female characters — it might not fit into the category of The Type of Books That Boys Like. There’s not a lot of action. It’s a friendship story. Maybe it would be boring for typical boys, whomever or whatever that might be. I loved the observation made by Karen Terlecky at Literate Lives in the very first review of Spider:

I’ve read a lot of books recently about girls trying to make sense of friendships and themselves, so it was a delightful surprise to find and read an advance review copy of a book that deals with boys trying to find where they belong . . . .

I wonder: Did I accidentally write a girlie book about boys? And is such a thing possible? Or unwelcome? Or needed? Can it be that a He-Man such as myself is, deep down, just a wuss?

I am genuinely interested in this topic and invite your comments. It’s something I’ve been puzzling over for a while now. I haven’t reached any wise conclusions. But maybe that’s what blogging should be: that it’s okay, maybe even preferable, to open things up for discussion, rather than attempt to neatly wrap things up, tie down all the loose ends.

On a diagnostic level, we can all agree that boys don’t read as much as girls. We can see the divides in our educational system. But it becomes far trickier when we encounter it on a prescriptive level, when we read that we need more . . . books for boys.

Because, of course, what IS a book for boys? Following the standard clichés, we’ll see well-intentioned publishers roll out a bunch of sports titles and a series of picture books about trucks and dinosaurs. Boys love that stuff! Oh yeah, and gross stuff, too — boys love disgusting things. Farts and vomit! Bodily functions! Smashing things! Underwear! And on and on.

And you can see where that kind of reductionistic thinking leads us. Exactly nowhere. Where Boy becomes Caricature, effectively ignoring the vast number of outliers, the sensitive ones, the insecure boys, ignoring the notion that boys may be All That and So Much More.

What is a book for a boy? What do boys like? To answer that, we have to address the idea of what is a boy? I guess what worries me is when those answers get too restrictive, too limited, when publishing for boys does a disservice to what boyness is all about, in all its sprawling, messy glory.