MY GREAT-GRANDMOTHER’S IRISH OBITUARY: “There Is General Regret in Ravensdale”

I heard from a distant family relative recently who shared with me the obituary of my great-grandmother, “Mrs. McDermott.” What an unexpected treasure of family history and lost language. 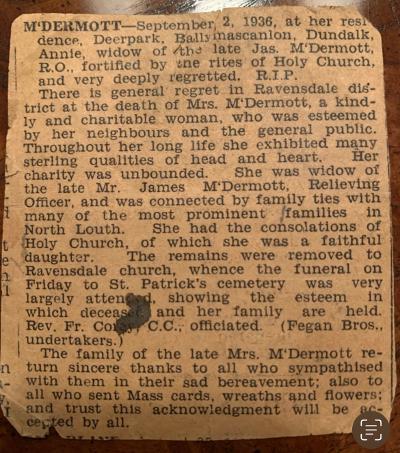 My maternal grandmother came over from Ireland as a teenager, though I’m unclear on the details. That’s where our roots are, where I sprang from, the wee county Louth.

I love so much the language from this 1936 newspaper clipping. Those wonderful turns of phrase for which the Irish are noted.

“There is general regret in Ravensdale . . .”

“a kindly and charitable woman”

“esteemed by her neighbors”

“exhibited many sterling qualities of head and heart”

“her charity was unbounded”

“whence the funeral on Friday at St. Patrick’s cemetery was very largely attended”

“sincere thanks to all who sympathized with them”

“in their sad bereavement” 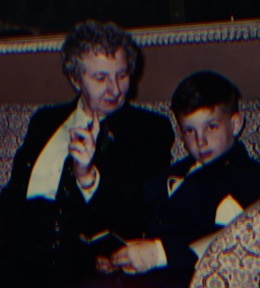 Here is a photo from the mid-1960s. I am sitting beside Mrs. McDermott’s daughter, my grandmother Bridget Gilluly, formerly Bridget McDermott. To me she was Grandma Bridgie, and also, Granny Good Witch. She later came to live with us in Wantagh when she needed more assistance. As my brothers and sisters left the house, she arrived to take their place. 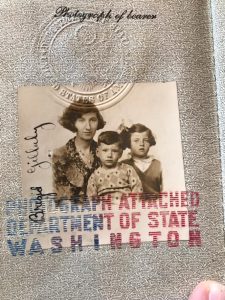 Sidenote: My brother Alan — the Pottery King — just passed along this passport photo. Grandma Bridgie, also called Bride, returned to Ireland for a visit with her two young children, Ann (my mother) and Billy (my uncle). Click to enlarge if you are so inclined.