IT’S A SCARY TIME OF YEAR: The Craft of Anticipation & Suspense 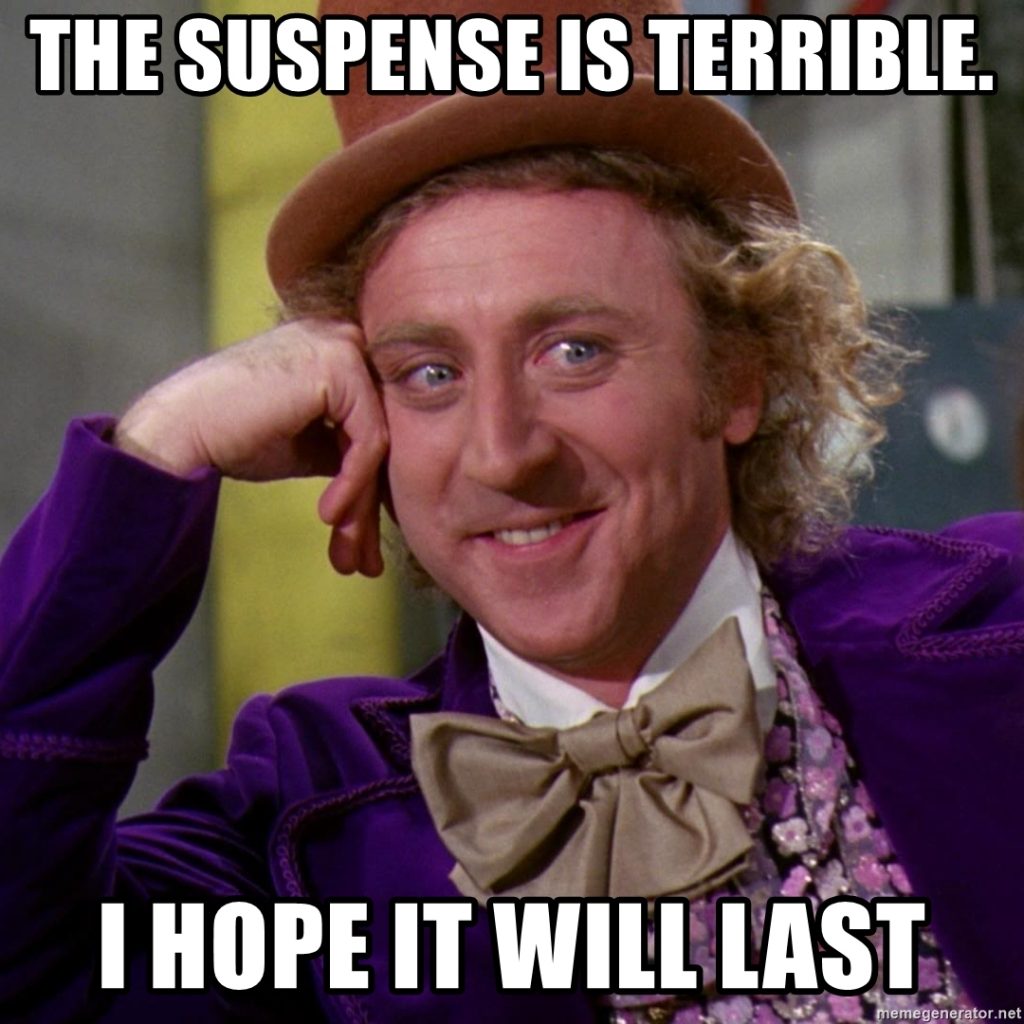 As someone who likes scary things at any time of year, I’m often surprised when October rolls around and suddenly . .  . IT’S SCARY SEASON!

I had thought a good story was a year-round thing.

But here we are. The bulletin boards turn to black and orange, the featured books in the library are about witches and zombies, and readers of all ages start looking for something creepy that will keep them turning the pages late into the howling night.

Even classroom teachers decide to share a not-too-terribly-spooky story with their class.

Isn’t it nice, by the way, to remember that: reading a story just for the fun of it? More of that, please.

Have I got some books for you. 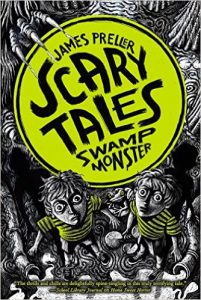 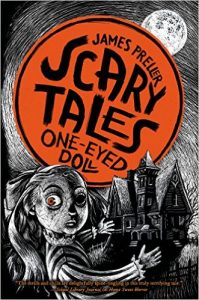 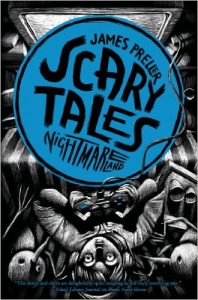 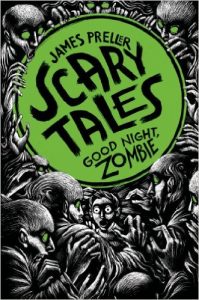 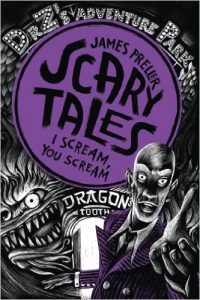 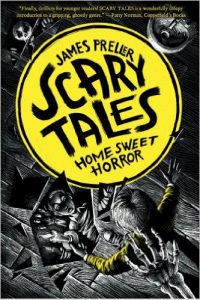 There are six titles in the “Scary Tales” series, each with different characters in different settings. No need to read them in order. I think of these in the old vernacular as hi-lo books — high-interest, low reading level. Perfect for a wide range of reading abilities, from 3rd-grade to 5th, though I’ve met many 2nd-graders who adore these frightening stories as well as 6th-and 7th-graders who love the triumph of reading fast-paced, easy-to-read books filled with chills, thrills, and supercool illustrations.

What follows is a complete chapter from Home Sweet Horror, which you might wish to read aloud with young readers. But first, the setup: Do you know when you are watching a movie, someone will say, “Whatever you do, don’t go into basement.”

You know what must happen next, right?

The character goes into the basement!

But you are also kind of glad at the same time. The story is about to get more exciting. So you lean forward on the edge of your seat as, step by spooky step, our misguided character plunges down into the dimly-lit gloom.

Surely horrible things are about to happen. You’ve already been warned. Oh, joy.

Importantly, our sense of story requires it. This is the Rule of Chekhov’s Gun. The Russian novelist and playwright famously put forth the dramatic principle that every element in a story must be necessary. Elements shouldn’t make false promises. Here’s Chekhov:

“If you say in the first chapter that there is a rifle hanging on a wall, in the second or third chapter it absolutely must go off. If it’s not going to be fired, it shouldn’t be hanging there.”

Allow me to put it another way:

If the basement is described as dangerous, then a character must inevitably go down there — or else the writer shouldn’t mention the basement!

That’s what I love most about scary stories. The craft of anticipation and suspense, when readers lean in, feeling excited and nervous about what might happen next. As a writer, those are the dreadful moments I seek to create in this series.

Remember that great line by Oscar Wilde from The Importance of Being Earnest (later famously borrowed by Gene Wilder in “Willy Wonka and the Chocolate Factory”)?

The suspense is terrible. I hope it will last.

Here’s Chapter Three . . . give it a try with your students. After all, it’s October! A great time of year to read just for the shivery thrill of turning the page.

Liam stood in the hallway of the kitchen, peering into the basement. The stairs were ancient wooden boards nailed across empty space. One false step and it was a long drop to the cement floor below. The basement gave off a smell of decay, of things gone rotten. A place where mice had crawled off to die. Home to cobwebs and spiders, trapped flies and ruined toys.

Liam flicked the switch on the wall. Nothing happened.

At the bottom of the stairs, he could make out a bare bulb that hung from the ceiling. It had a pull string. Maybe that would do the trick.

But an inner voice made Liam cautious. He remembered his father’s warning during breakfast. “I’ll be gone most of the day,” he said. “I know you like to explore, Liam. And that’s fine. Up to a point. But stay out of the attic, and don’t go into the basement. I don’t trust those old stairs. And that old furnace needs to be replaced. It’s an accident waiting to happen.”

When Liam stepped back to shut the basement door, a metallic sound came to his ears. Clang, clang, clang.

Again, in a stronger voice, “Anybody down there?”

Liam wiped his hands on his pants. He looked around. Puffed on his inhaler and thought about things. Breathe in, breathe out. Kelly was upstairs in her room. Still asleep, most likely. Or texting, texting, texting — like always. His father away on errands: groceries, the lumber yard, who knows where.

All Liam really knew was that he was alone.

Or alone with the house.

The sounds echoed up in rhythm, like a voice calling to him, a song in the dark.

Doolin stood protectively at Liam’s side. Grrrr, she growled. A warning sound, low, from deep inside the animal’s chest. Grrrr, grrrr.

Transfixed, Liam took one cautious step down the stairs. He shifted his weight from his left foot to his right. There, creak, the old board held strong. Some fluttery something brushed across Liam’s face, like the shadowy hand of a ghost. 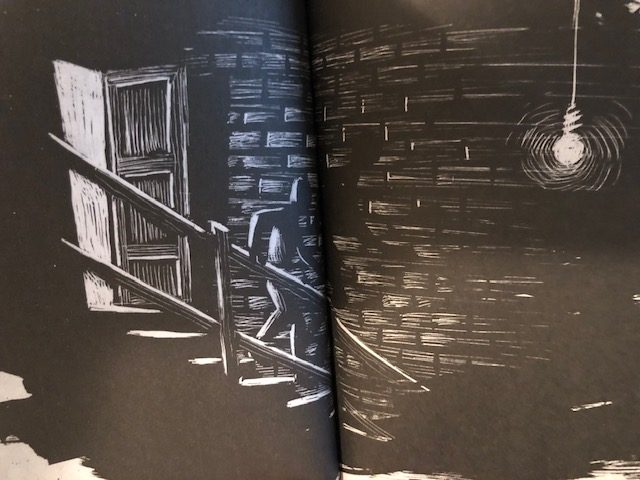 Apologies for the poor quality of my phone-camera shot. Illustration by Iacopo Bruno.

No, it was only a cobweb, a spider’s trap.

“Come on, girl,” Liam called to his dog. “Let’s explore together.”

The dog sank to the floor, head on her paws. She growled, a rolling rumble of fear and warning.

“What’s the matter? Too dark for you?” Liam asked, honey in his voice. “You’ve never been bothered by stairs before.”

“Come,” Liam ordered, his voice deeper. The sound of command.

Liam shrugged, moved down another step, and another. Halfway down, he could bend at the waist to peer into the vast, dank basement. It was filled with crowded shelves, boxes, and broken furniture.

Clang, clang, clang banged the noises. It was something in the far back corner, a heavy, black shape. The furnace, perhaps. That was the source of the sounds. At last Liam reached the lightbulb, pulled on the string. There was a burst of wild electrical light and — pop! — the bare bulb shattered into pieces.

It startled Liam. He sensed a shape drifting through the basement, soundless and black, moving toward him. He turned and ran up the stairs, taking them two at a time, landing heavily with each step. Crash! A board cracked and Liam fell, slamming his shin hard against the wood. He grabbed the top step, catching himself before he fell. He wheezed, felt dizzy, woozy. Liam’s left leg dangled in the air, kicking at nothingness. He felt a thin, skeletal grip around his ankle. Like a claw pulling, dragging him down. 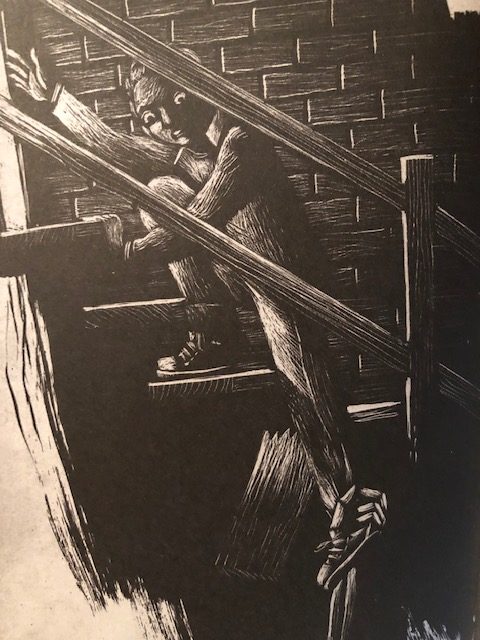 His back against the door, Liam sat on the floor, legs splayed. He took a puff from his inhaler. And another. Breathe in, he reminded himself, breathe out.

Down below, through the door, he swore he heard the sound . . . of laughter.