The Betsy Bird/Katherine Hepburn Conundrum, “Librarian Lays Down the Law” . . . and “The Hollywood Librarian” DVD 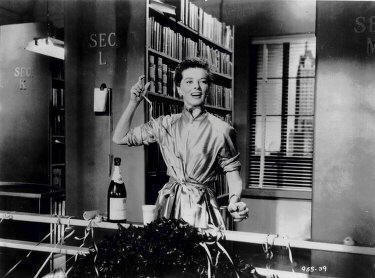 Question: Why does this image from “Desk Set,” starring Katherine Hepburn as librarian Bunny Watson, remind me of Elizabeth Bird? Anyone? Anyone? Bueller?

While I’ve got you, I have to share this fabulous clip that should tickle the fancy of any librarian. Finally, a realistic portrayal. The actress is Parker Posey, America’s indie-film queen, from the movie, “Party Girl.”

And more seriously, here’s the trailer for a documentary titled, “Hollywood Librarian: A Look at Librarians Through Film,” a film I totally missed when it came out in 2004. It’s now available on DVD. Some notes from the Media Education Foundation:

This film’s subject is librarians: who they are, what they do, why they do it, and the impact of their work in people’s lives. The underlying meaning is how we express our own humanity, how we listen to ourselves and one another in the realm of the written and read word — a uniquely human privilege.

Audiences will be surprised and delighted by the fascinating librarians in this entertaining and enlightening film, and will emerge with a greater appreciation for the range of literature and materials available to them thanks to our nation’s librarians.

The film was written and directed by Ann M. Seidl, a library consultant. For a bref interview with Ann, you want to click wildly right now.

Tip of the hat to the great pop culture blog, Pop Candy, for the inspiration.