One Year of Bloggy Goodness

A year ago today, I made my first post on this blog. 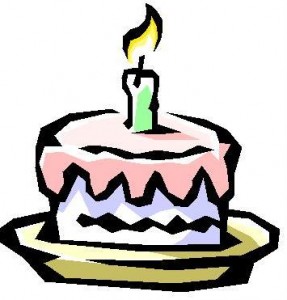 No, I don’t know what that means, either. But I do know I’m grateful to everyone (and anyone!) who has stopped by to check it out. And I’m especially grateful to my Nation of Readers who swing by on a semi-consistent basis. Thank you.

My friend Craig Walker used to joke, half-seriously, that everything you could ever say about love has already been said on the Supremes’ “Live at the Copa” album. That is, there are no new revelations forthcoming. So we fall back on the old cliches because they pretty much say it all. Blogging has opened new doors for me, and most significantly, introduced me to a lot of great people. A community. More than anything, that’s been the best part of this blog — and I’m looking at you, dear frantically clicking reader.

So what did I post a year ago? A little tribute to my pal, Craig Walker, titled “Remembering Craig.” I learned more from Craig about children’s literature, and life, and laughter, than just about anyone in this world. He was that rarest of things: a truly great man. My enduring image is of Craig at his desk at Scholastic, while a line of young editors waits outside the door, hoping to catch a few minutes of his time. And whatever they needed, Craig somehow gave: a decision, advice, support, insight, friendship, or laughter. He left us all enriched. But he did leave us, late summer of ’07, and we’ll never forget that time we had, all of us. Craig’s one amazing gift, I think, was that each one of us — out of hundreds — felt that we shared with him a special, individual, meaningful friendship. (I guess we all felt like “unique visitors,” way before it became a kept statistic.) For that time, he was ours. Craig was wholly present with the person in his company; he made you feel, in that moment, like you mattered most of all.

How’d he do that, I wonder? How do you become such a good man?

This is my original post from a year ago:

I often fill my books with little in-jokes, things that few people (if any) will notice. I guess that’s true of most writers. After I worked for a long time on individual character sketches, it came time to construct the actual game for Six Innings — the play-by-play details. I started by looking at a lot of Little League scorebooks, because I’m a nut when it comes to authenticity. Thanks to the Internet, I was also able to review detailed scorebooks from actual Major League games at baseball-reference.com, one of the coolest baseball sites ever.

I searched for one game in particular: Game Six of the 1986 NLCS, Mets vs. Astros. It was a sixteen-inning ordeal, and maybe the best game I ever saw. But it’s also tied to a specific memory. I worked as a copywriter for a children’s publisher in New York. While at work, I followed the game on the radio. At around quitting time, maybe a little before, I called my great pal, Craig Walker, and said, “Hey, our Mets are losing 3-0. It’s the 8th inning. Let’s go to Acme on Great Jones Street, have a beer, and watch them break our hearts.”

Craig did not need to be asked twice. We sat down at the near-empty bar, ordered a glass of suds, and watched the television. The Mets miraculously tied it up with three runs in the ninth inning. The game was on. We ordered another beer. Then another. Because the game kept on going. Ten innings, twelve innings, fourteen innings. We ordered food. We laughed, we watched the game in wonder and anxiety and joy. We made about a dozen new friends that day, since by then the city had caught on and seemed to stop — something was happening in Houston, a ballgame of amazing drama, and everybody had to Stop & Pay Attention. In the top of the 16th, the visiting Mets scored three runs. We sweated through the bottom of the inning, when the Astros almost came all the way back. It taught me that it was more exciting, more stressful, trying to cling to a lead than to dramatically win a game with the swing of a bat (which is joyous and exhilarating, don’t get me wrong).

I used that game as a model for parts of Six Innings. I cobbled together the top of the 9th and the bottom of the 16th and transferred it to the 6th inning of my fictional game. Today I read the book and the ghost of that afternoon with my beloved friend, the great Craig Walker, still hovers around the edges. Craig is gone now, passed too soon from this world, and he never got to read my book, our book, a tale I dedicated to him.