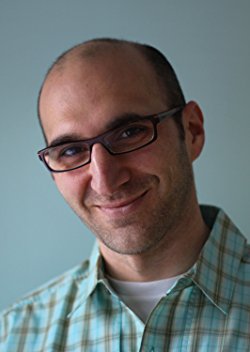 Greetings, Aaron. Let’s talk about your book, Journey. You do a masterful job in that opening spread, making full use of the copyright page, establishing the core elements of the story to come. Journey begins with a bored girl on her front stoop. Inside her home, through a cutaway device, we see her father looking at the computer, her mother talking on the phone, her sister staring at an electronic device. The world is dull and monochromatic –- except for one red scooter and, off to the side, almost unnoticed, a boy with a purple piece of chalk. Is that how this story started for you? As a reaction against our hyper-involvement with technology?

Yes, to the extent that much of my childhood was spent hoping my Dad would get off the home computer. I never saw the computer as an answer to life’s biggest questions; to me it was clear that there was more value in my imaginary play than anything I could gain on a machine’s screen. 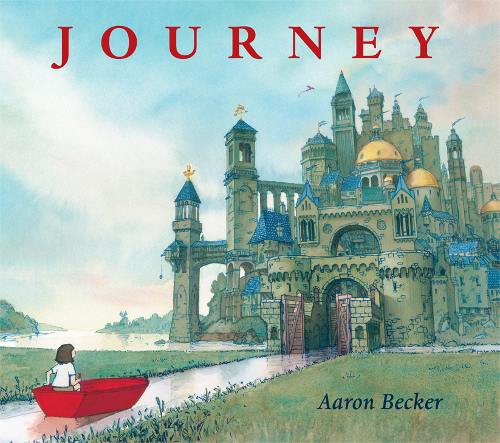 Next comes what I consider the essential illustration to the story. And my favorite. The girl is alone in her room: bored, bored, bored. I love that critical moment, because I’m a huge believer in the positive value of boredom. Most people have an aversion to empty space –- on the radio, silence is called “dead air.” Thanks to technological progress, we can now pick up a phone and scroll through Instagram at the first momentary lull. Crisis averted. Many of us seem to have lost our ability to work our way through (and beyond) that boredom.

This is the crux of it. It’s interesting too, because during the lead up to the election, I depended a lot on the internet as a source of comfort to ease my concerns for the outcome that I feared. I was aware of this, and even went so far as to go on a writing retreat away from the news cycle the week before the vote. Now that we’re on the other side, I can see so clearly that these tools were a false comfort to begin with. It’s been much easier for me to stay off social media and news websites this past week, and not just because I don’t want to see evidence that we have a new President. It’s more that I realize there’s no use in building one’s sense of reality on something that is so removed from our actual physical existence on Earth. In a sense, I felt betrayed by technology once again. It’s a lesson I hope to remember.

I’m sorry, what, were you talking? I was just checking my . . . [puts away phone]. It occurs to me that if you gave your central character an iPhone, she would have never gone on that journey. You would have lost an entire trilogy.

I do think there’s a loss. When I was a kid, I watched way too much junky TV after school (which, I would like to add was brought on by actual policy from Reagan’s FCC that allowed toy makers to create half hour commercials as entertainment for children) and I often think this hampered my brain’s ability to function as an adult. But I’m also not entirely convinced that we were that much better off before. People have a lot more access to different types of storytelling (and stories) than they ever have. It’s a busy landscape to navigate and I’d like to think that the children out there today that can manage the overload will come out with some pretty amazing stories to tell. That said, I’m not sure I could survive it. When my friends were all moving onto advanced gaming consoles, Pac Man was about all I could handle. One joystick and no buttons.

I think when people are bored, they ultimately have two choices: 1) Stay bored (and become boring themselves), or 2) Get creative, do stuff, make things happen. Quick story: I witnessed this dynamic when we took our kids on vacations in the Adirondacks. We often rented a cabin on a lake with no Wi-Fi, no TV, no town, no stores. For the first half hour, every year, they were lost. What now? Then, you know, they got busy. They built forts, went fishing, swam out to the pier, played cards, explored the grounds, looked for frogs, read, drew. All thanks to that wonderful boredom!

I was bored for most of my childhood. School was excruciatingly boring. At home, my family was of the serious academic variety and I was the only one interested in play. So I had to figure it out on my own. I didn’t need the Adirondacks; it was like that for me 24/7. I was industrious. I used the Styrofoam from my Dad’s computer boxes to build stuff. And in 5th grade, I moved down into the basement to decorate my own universe. I should also add that three of my close friends from elementary school in Baltimore, who suffered the same boredom as I did on all fronts, have gone on to distinguished careers as writers including a Pulitzer Prize finalist, a New York Times staff writer, and a children’s book author. Go Baltimore City Public Schools! 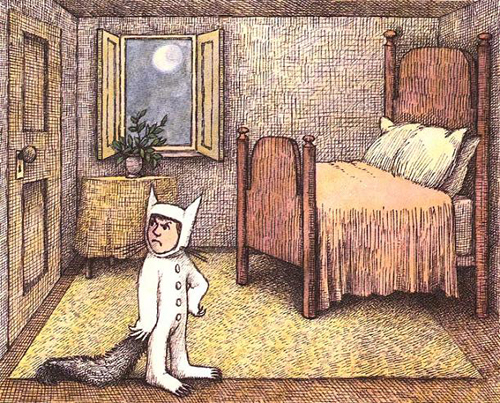 Stuck in a room, another famous children’s book character had to imagine his escape from boredom. Illustration by Maurice Sendak from WHERE THE WILD THINGS ARE — but everybody knows that.

In the girl’s bedroom, you scatter little clues about her character. The air balloon hanging from her ceiling, the drawings of the pyramids, the map of the world on her wall –- and even, very small, a plane flying outside her window. That’s important to you, isn’t it? The sense that we’re living in a great big world.

I think I’ve always been looking for a way out, and so to that end the world offered possibilities. It’s not that my home life was terrible. I just wasn’t getting what I needed so I looked beyond it for an answer. I’d imagine most of us can relate to that!

Obviously, your book owes a debt to Crockett Johnson’s Harold and the Purple Crayon. The device, the crayon, is the same, but the execution could not be more different. Also, the basic plot is timeless: using the imagination as escape, as a way to explore new worlds. Were those books important to you as a child? 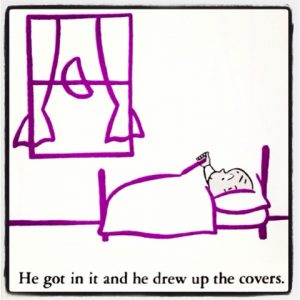 Actually, I was never a big fan of that book! I think the drawings bugged me somehow. But I do remember that when I finished Journey someone mentioned the similarity and so I looked at it as an adult. I was amazed at the similarities in the story! I probably would never have made Journey if I was aware that there was something so similar already out there!

Yes, I hear that. I was talking about this issue with Jessica Olien recently. There’s a freedom in not-knowing. I mean, I’m aware of authors who avidly read Publishers Weekly and stay up-to-the-moment about what’s being published. But I’m the opposite, because my tendency is the same as yours: “Oh, rats, it’s already been done.” Creatively, I feel better off not knowing too much. A little bit goes a long way. I’m not a librarian or a publisher; I’m a maker. Our work has different requirements.

I’m a big fan of picture books and illustration in general, so I’ll often go to stores that do a nice job of curating their shelves (like the one at the Eric Carle Museum here in Amherst) and pick out a few books to take home that I like. But I’ve never been interested in following trends or trying to interpret the market of what sells or is popular with critics. I feel like I have this chance with the books I make to create something akin to actual fine art, in that I feel like I’m making something entirely fueled by my own curiosity and interests. The minute I start to create books that I think will sell well is the minute I might as well go back to working as a hired gun for advertising or film.

Amen, brother! During her journey, our female protagonist experiences great beauty in the natural world. But there are also dark forces at work. The soldiers and guards who seek to capture and control. Are you saying, in effect, that there are forces that conspire against our imagination?

I’ve always thought that the emperor and his soldiers are interested in capturing the purple bird because it represents something they can’t understand or access. They’re aware that the bird has some sort of magical quality to it and it frightens them. But the girl just wants to set it free. She doesn’t hesitate. The emperor represents that force inside of us that might more against that spontaneity of creation. Self-doubt, jealousy, envy, fear. We all have it.

We hate what we do not understand. Except for your art! I have no idea how you do it, Aaron, but I love your work. What materials do you use to create these illustrations? Smoke and mirrors and what else? Forgive me, I’m no Julie Danielson; I’m a little lost when it comes to talking about artwork. 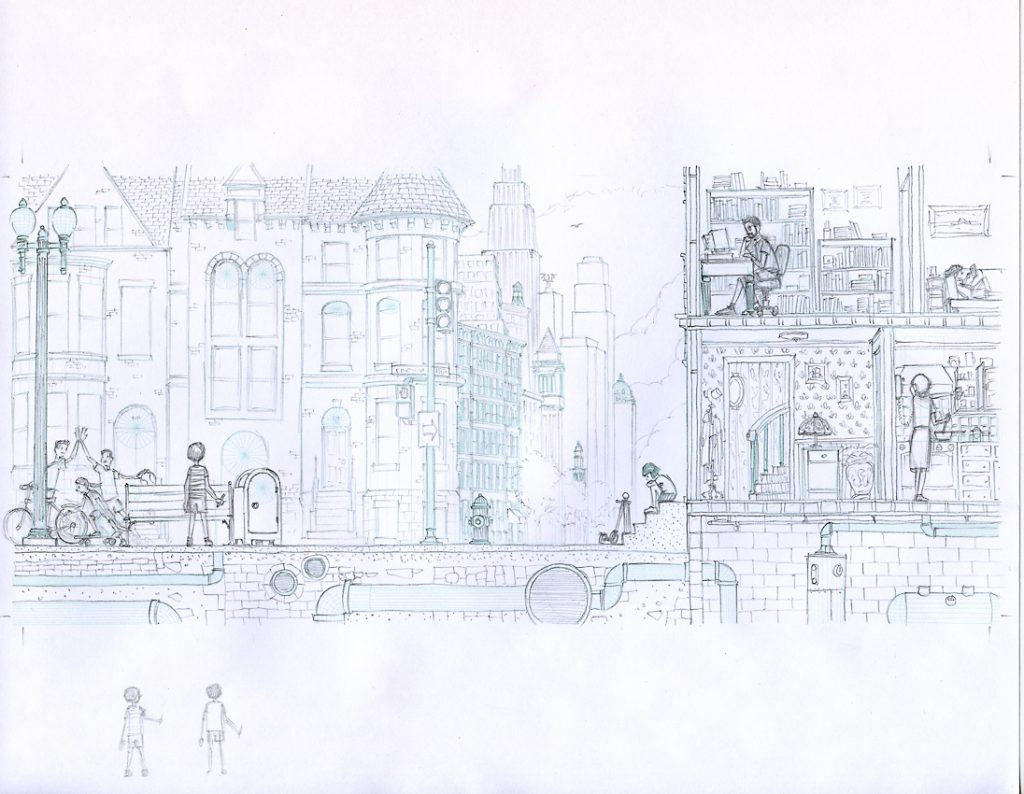 I start with pencils until the story is working. Then I build some 3D models in the computer to aid in the perspective of the architecture; these models get printed lightly out onto paper and I do another, more detailed pencil drawing for each spread. Then I scan that pencil in the computer so that I can print it out very lightly onto watercolor paper as the basis for my ink drawing. From there, it’s just like a traditional water color painting. Journey took me about a year and a half to produce. It’s laborious but it’s the only way I know! 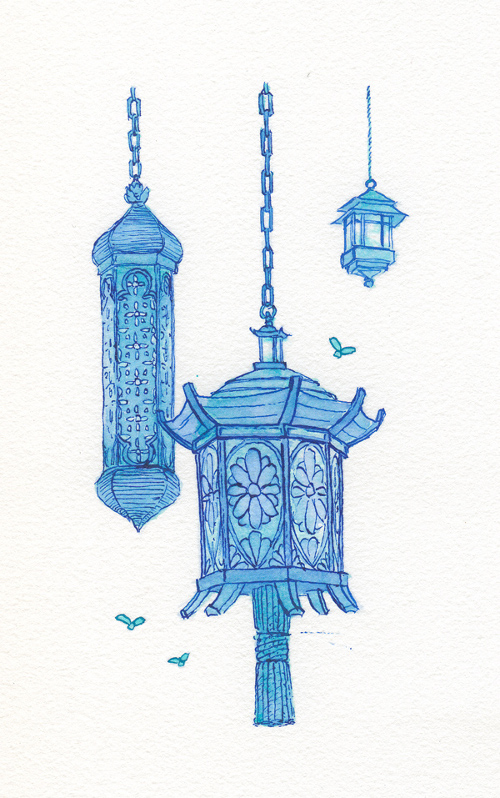 This is a wordless book, and your very first. Congratulations on such a jaw-dropping accomplishment, for it is a debut book that announced the arrival of an exciting new voice. I enjoyed thinking about your story long after I first encountered it in the wild. Did it have words in early iterations? The wordlessness seems to open up the potentialities of story in ways that wouldn’t be possible if it included text.

Thanks. I do feel like I made the book I wanted to make and the success that has followed has been just one giant blessing. I didn’t plan on it being wordless. But my when I fished my first draft, which was literally a series of small thumbnail sketches on one big sheet of paper, I realized that adding words would only be redundant. The story was already there.

There are currently three books in Aaron Becker’s “Journey” Trilogy: Journey, Quest, and Return. If readers are feeling bored, you can find Aaron’s website by searching high and low on the interwebs. It might inspire your imagination.

ABOUT THE “5 Questions” INTERVIEW SERIES: It’s a little project I’ve assigned myself, hoping to reach 52 authors & illustrators in the course of a year, always focusing on one book. I almost called it “Author to Author” but I didn’t want to push myself to the front of it, though that is part of what makes these interviews unique. We’re in the same leaky boat.

Coming next week, my great pal Matthew Cordell (Wish) You can hit the “SUBSCRIBE” icon and, hopefully, it will work. Scheduled for future dates, in no particular order: London Ladd, Lizzy Rockwell, Matthew Phelan, Bruce Coville, Jeff Mack, Jeff Newman, and more. To find past interviews, click on the “5 Questions” link on the right sidebar, under CATEGORIES, and scroll till your heart’s content. Or use the handy SEARCH option.