I haven’t been sharing too many letters lately — sometimes there’s a samey-ness to them, I suppose — and I almost didn’t share this one. It felt a little self-serving. But, hey, this is my blog! That’s what we do here! It’s all about the glorification of me, me, me!
Over the years, I’ve received fan mail from familiar sources. I begin to recognize the names, the places. Here’s such a letter, but its arrival took an unusual path. I’ll begin below with my response, and follow that with Ms. Betances’ wonderful reply to me. It seems we actually go waaaaay back. You’ll get the drift. By the way, thank you Matt Ball — old neighbor, old friend — who went the extra yard to see to it that I received a wayward package. Matt is a teacher, so it’s no surprise that he went above and beyond to help a fellow teacher and her students.
–
I wrote:
–
Dear Ms. Betances,
It is something of a miracle that your wonderful package, filled with great stories, actually reached me. Long ago, I lived at 38 East Bayberry Road, in Glenmont. Your letter was addressed to 32 East Bayberry. However, I now live at 12 Brookside Drive, Delmar, NY 12054. Been here for more than a decade.
Somehow an ex-neighbor came into possession of the package and drove it over to my house. Lucky me, lucky you. 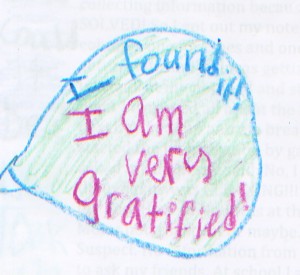 Art by Briana — a good writer who found exactly the right word — from “The Case of the Missing Rubik’s Cube.”

–
So please make note of my current address.
That said, hi, it’s nice to hear from you again. I appreciate your kind words about Jigsaw Jones and Scary Tales. I actually just wrote a new Jigsaw Jones book — THE CASE FROM OUTER SPACE — and it will be out in Spring of 2017. I’m so excited about it, since those books have been out of print for several years now. They’ve moved from Scholastic to Macmillan, and for the beginning the plan is to re-release 8 old titles and sprinkle in something new.
I’m very impressed with the stories you sent. So first a shout out to Irene and Shirley, Rida, Briana, Ileyana, Taya, and Michelle. Great work, writers! (And that’s a wonderful collection of names, by the way.)
I loved how each story was unique. The illustrations were especially terrific, though I apologize in advance that I couldn’t represent every artist in this blog post. Don’t you guys love mysteries? There’s something to that genre that hooks a reader from the beginning. And in each case, there’s a happy — and often surprising, sometimes even funny — ending.

Art by Irene and Shirley, from “The Case of the Missing Cockatoo.”

–
Each story offered new pleasures. Michelle’s story about the missing eyeglasses could have been taken from my own life. I am forever looking for my glasses, and sometimes find them on top of my own head! I was relieved when Sally found the missing chapter book, that would have made me crazy. I loved the last sentence in Irene and Shirley’s story, “We are here to help, always here!” Plus it was cool to learn a little bit about cockatoos. Rida’s story was creepy and suspenseful — two of my favorite things. I especially loved the big illustration on the back. Briana’s story was lively and entertaining; it’s always good to ask Mom, she usually knows. Lastly, I’m pleased that Ileyana’s hands will never be cold again — though perhaps that’s a bit optimistic. Never is a long, loooooong time. 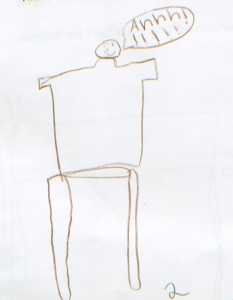 Art by Michelle from “The Case of the Missing Eyeglasses.”

–
Keep up the great work. I’m always glad to read a good mystery. The day I opened your package, I got to read six!
My best,
JP
–
Here is the fabulous reply I received:
–

OH MY GOD! Yes this was a miracle. You are not going to believe this but every year my new students read the letters you’ve  sent to my former classes. We have a pile of them. It so happened that the kids who were writing the letter took the address from the letter written in 2001. That was 15 years ago. Of course I trusted them and didn’t verify to make sure they chose the correct one. LOL.

It must have been Tinker Bell, our class fairy, who put the package back on the right path. The kids would have been disappointed if they didn’t get a reply from you. You are truly an amazing, unique and genuine individual. I have been teaching for 32 years and have never met an author who actually takes the time to really care about his fans. Thank from the bottom of my heart. My students love the mystery genre because  they really enjoy reading your books. Every student who has been in my class still thinks you are the coolest and best writer ever. Congratulations in being such a fascinating author. My last year class was speechless when they saw that you wrote a blog about their mystery. This year class loved the fact that you made a connection to their stories to your own personal life. I shared your letter with my principal and the staff and they were like WOW! WOW! that was incredible. The teachers as well as the students enjoyed your letter.

I know that you are a very busy author but yet you always take the time to comment on their mysteries.
Thank you,
Your biggest fan
Anita Betances
TMK Leaders (The Magical Kids) 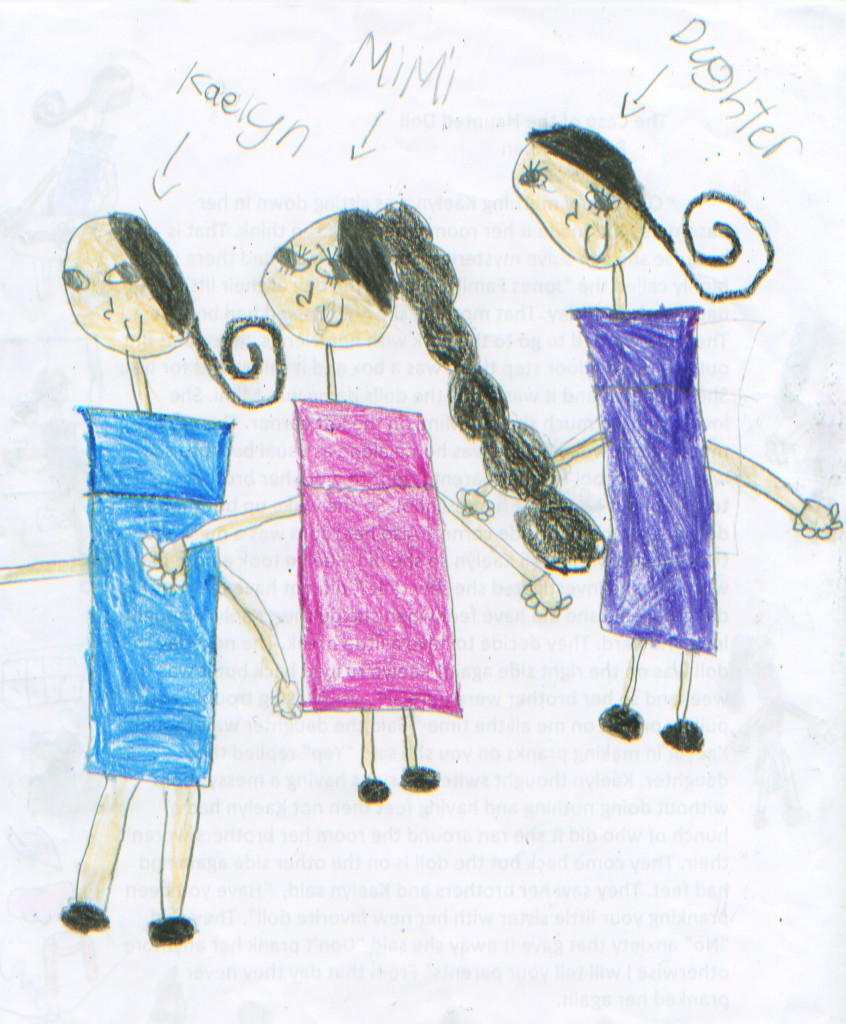 Art by Rida, who is fabulous, from “The Case of the Haunted Doll.” (Yeah, I got a little scared.)

I am very excited about the revival of my “Jigsaw Jones” mystery series, thanks to my friends at Macmillan. I owe a particular debt to three people: my agent, Rosemary Stimola, and two fierce women in publishing, Jean Feiwel and Liz Szabla. Not only are they resurrecting some long out-of-print titles, but they’ve asked me to write a new book. Which I just did, The Case from Outer Space. A daunting task at first — it had been some years since I’d entered Jigsaw’s world — but very quickly it felt like home again. It was a happy book for me to write, and I hope that comes through in the story.

Right now my publisher, along with artist R.W. Alley, are exploring new cover designs for the series re-launch. My job, at this point, is to sit back and hope for the best. Fingers, toes, everything’s crossed! It’s not as hard as it sounds. I’m confident that the fate of my favorite detective is in good hands. Which is such a relief. Probably the most painful part of my publishing life has been to watch that series, with almost eleven million books in homes and classrooms, slowly die on the vine due to neglect. Nobody could buy them anymore outside of Craig’s List. Well, that’s going to change, and I feel nothing but grateful.

One other small detail that pleases me about the new book is that I used a “Little Free Library” as a central device in the mystery. I love Little Free Libraries — we have several in our sunny burb — and I’ll glad to give the idea a moment in the spotlight. Readers may enjoy this terrific piece about the libraries by Tammy Mulligan and Clare Landrigan, originally posted over at The Nerdy Book Club. 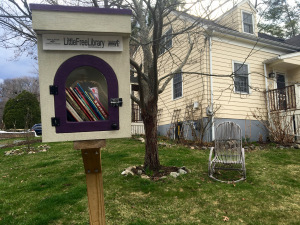 In the meantime, here’s a sample from the upcoming book, due in the Spring of 2017, along with four more titles. Jigsaw is back!

Sample chapter from The Case from Outer Space.

“Oh, they are delicious,” Joey said. “I ate six yesterday. Or was that last week? I forget.”

Danika shook her head and giggled. Joey always made her laugh.

I set out a bowl of chips.

Joey pounced like a football player on a fumble. He was a skinny guy. But he ate like a rhinoceros.

“We found a note,” Danika began.

“Aliens are coming,” Joey interrupted. He chomped on a fistful of potato chips.

I waited for Joey to stop chewing. It took a while. Hum-dee-dum, dee-dum-dum. I finally asked, “What do you mean, aliens?”

“Aliens, Jigsaw!” he exclaimed. “Little green men from Mars –- from the stars –- from outer space!”

I looked at Danika. She shrugged, palms up. “Maybe,” she said. “You never know.”

I took a long swig of grape juice. “You mentioned a note,” I said to Danika.

She sat tall, eyes wide. “It’s very mysterious, Jigsaw. That’s why we came to you.”

I leaned back in my chair. I shoved my hands into my pockets. They were empty. Business had been slow. I was a detective without a case. “Let me make a phone call,” I said.

I never work alone. My partner’s name is Mila Yeh. We split the money down the middle, 50-50. Mila has long black hair. She’s crazy about books. And she’s my best friend on the planet. Together, we make a good team.

I asked Mila to meet us in my tree house. She said she’d be over in five minutes.

It took her three and a half.

Mila lived next door. And she was as quick as a rabbit.

As usual, Mila was singing. I knew the tune, but the words were different:

How I wonder what you are?

Could you really be up there?

“That last line needs work,” Mila replied. She sang again, “Do Martians wear . . . underwear?” Satisfied, Mila sat down, criss-cross applesauce. We gathered in a snug circle. There was no choice. My tree house wasn’t exactly a palace. I am not complaining. But I don’t go up there on windy days. Mila’s eyes were active and alert. They moved from Joey to Danika, before settling on me. “Aliens, huh?” Mila asked.

“Uh-huh,” Mila replied. If she thought Joey was crazy, Mila was too nice to say it out loud.

I took out my detective notebook. I opened to a clean page. With a blue pen, I wrote:

THE CASE FROM OUTER SPACE

I left that part blank. I didn’t have any clues. I wasn’t even sure I had a case. But it was better than nothing.

“Maybe we could start from the beginning,” Mila suggested.

Joey and Danika exchanged glances. “We have one teensy-weensy problem,” Danika said.

“That’s the worst kind of broke,” I sighed. 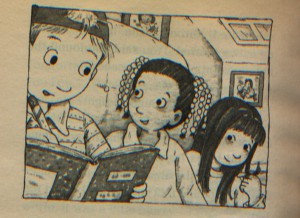 Here’s an illustration Jigsaw, Geetha, and Mila, taken from THE CASE OF THE PERFECT PRANK, illustrated by Jamie Smith. The art for OUTER SPACE hasn’t been completed.

“Maybe we could trade?” Joey offered. He reached into his back pocket. His hand came out holding a hunk of smelly orange glop. “I’ve got some cheese!”

Mila leaned away. “You keep random cheese in your back pocket?”

I was afraid to ask. We were all afraid. No one wanted to know what was in Joey’s front pockets. A frog? A hard-boiled egg? Last week’s bologna sandwich? Anything was possible.

There was still the problem of payment. I did not liking working for free. It was bad for business. But I needed a mystery the way a fish needs to swim . . . the way a bird needs to fly . . . the way a three-toed South American tree sloth needs to hang upside down.

“You can still have my cheese,” Joey said. He held out the orange glop as if it were pirate’s treasure.

Mila coughed. “That’s nice of you, Joey. Just hold on to it for now. For safe keeping.” She turned to Danika. “Let’s see that note.” 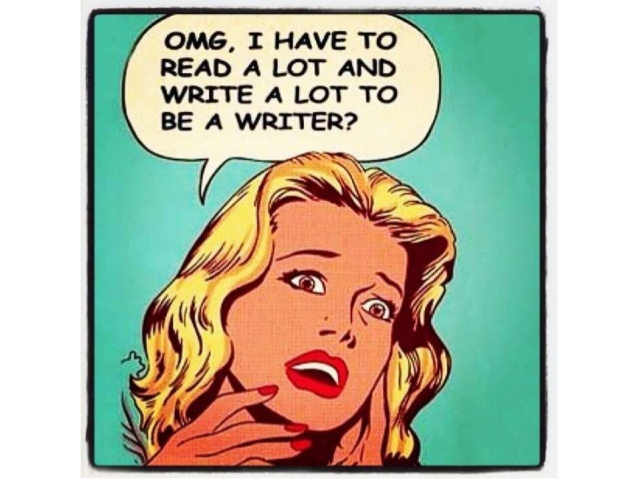