Stories Behind the Story: The Case of the Sneaker Sneak

When I speak to students, I remind them that I’m an ex-kid myself. It’s not as obvious as it used to be. I was a boy who loved boy things, with no burning interest in books or writing. I make that point only because it’s true.

When I was a kid, some of my friends began a tradition that we came to refer to as, “The Turkey Bowl,” where we played a loose, informal game of tackle football on Thanksgiving morning. And there I see it on the first page of my 3/1/01 manuscript: The Case of the Turkey Bowl, a title that would not last.

I played so much tackle football as a kid. Usually at Beech Street School in Wantagh, Long Island, with boys named Pat Sweeney and Jimmy Bradshaw, Michael Rose and Gary Francke, and whoever else was around that day. Nowadays I’m involved in youth sports from the adult perspective. And I make the same sour observation: “Kids these days, they don’t know how to play unless there’s five grown-ups standing around looking bored.”

It’s something that we’ve lost over the years — dis-organized ball — and I think it was something important. Kids today don’t have the freedom, or possibly the wherewithal, to play self-regulated sports. It just doesn’t seem to happen much. And maybe that explains to a degree why I like living in upstate New York. It feels about 30 years behind the times, in a good way.

The first chapter of this book is based on my memory of those days, those great games we used to play. I remembered one of my greatest triumphs: the day I tackled Michael Lenninger. He was an older kid, bigger, stronger, but somehow he joined our game. Every neighborhood had a Michael Lenninger, and on this day the guy was killing us, a punishing runner who left would-be tacklers scattered like bowling pins. Well, during that game I became determined to take down Michael Lenninger. I knew it would hurt. But the next  time he charged up the middle, I held my ground, wrapped my arms around his churning legs, and dragged that big bull to the turf. I remember that moment vividly, across almost 40 years, even though it was a big deal to exactly no one else. Why? Because it mattered to me, it was important. I showed courage and resolution on the proving grounds of Beech Street School; I proved something to myself.

In the book, Jigsaw tackles Bigs Maloney — or at least attempts to:

Where was a red cape when I needed one?

The next thing I knew I was lying flat on my back. Dizzy, I stared at the spinning sky. A few clouds floated past. They were white and fluffy. One even looked like a wittle, itty-bitty bunny wabbit. Off in the distance — far, far away — I heard Bigs Maloney rumble into the end zone. Or maybe it was a herd of rhinos tap-dancing on my skull. I wasn’t sure.

Joey knelt beside me. He poked at me with his finger. “Jigsaw? Are you okay?”

I blinked. At least my eyelids weren’t broken. “Anybody get the license plate of that marching band? I think I was just trampled by a tuba.”

In most of the books in the series, I try to reference a real book — usually one that I admire. So in Chapter Three, we find Jigsaw and his father reading Skinnybones by Barbara Park. I’d probably just read that book with my son, Nick, and we both enjoyed it very much. I once got to interview Barbara Park, in fact, and she was wonderful, alive and warm and funny. 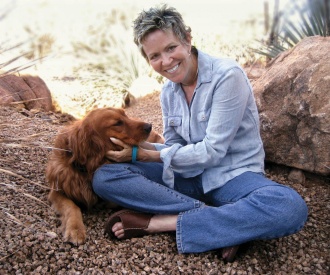 My boys refused to read her Junie B. Jones books, since like many boys they were repulsed by the idea of a female protagonist. For some reason, Maggie never really got hooked, though she read several. As for me, I admired Mick Harte Was Here, and was happy to show a little love for Barbara in this book. Also, I think it’s one of those things that helps make the stories realistic for readers. “Hey, I read that book!” Just another way of connecting their world to Jigsaw’s.

Another writer I’ve always respected is Dick Francis. I recently loaned one of his books to a literary friend, and he sort of sniffed at it, unimpressed, and returned it to me unread. Probably in a hurry to read more Margaret Atwood. Not that there’s anything wrong with that. Anyway, Francis writes mysteries, thrillers, suspense novels set in the world of horse racing. The books aren’t wildly ambitious. He just writes bestsellers that people like to read. A little adventure, a little love interest, a strong main character, an unfolding mystery: voila!

I had a friend in high school whose mother was an avid reader and a huge Dick Francis fan. She turned me onto him. I remember her complaint about many “literary” books by flashy writers: “Too many words, too many words,” she’d sneer. She liked writers who got to the point; who didn’t show off; who told a story and got out of the way. Her tastes would not have gone down well at the Academies of Higher Learning. I didn’t recognize it at the time, but Mrs. Flynn had given me a lesson that would stick with me, and grow inside me, for years to come. The value of restraint.

Back to Dick Francis: One of his things was there’s always a strong nonfiction element to his stories. He’d research a topic and integrate it into the story. So you’d read one of his mysteries and in the process learn about photography, or the brewing process of a single-malt scotch, or horse breeding, or whatever. I loved that about Francis, and have tried to emulate that aspect in my Jigsaw Jones books.

I’m wondering: Is emulate a fancy substitute for steal?

In this book I do a bit about turkeys, the wild compared to the tame, and so on. Just a little content in the book, so maybe somebody learns a little something along the way — and I always do it knowing that I owe the concept to Dick Francis. Now you know it, too. Hopefully, again, it also reflects the lessons that typically go on in real schools, another connection to the reader’s world.

Oh, hey, look at Chapter Six, “The Kid in the Hall.” Here’s a combined reference to my beloved New York Mets and Dav Pilkey. In terms of plot, Jigsaw is looking for a witness, and who better than the biggest troublemaker in school, the kid who is perpetually sent outside to sit in the halls. His name is George Seaver (Tom Seaver’s birth name) . . . 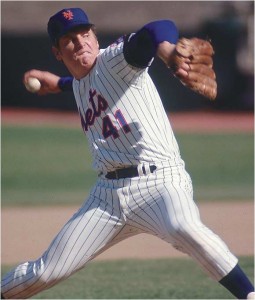 . . . and his teacher is Mrs. Koosman, named after probably my favorite southpaw of all time.

I modeled the character of George Seaver on what I imagined a young Dav Pilkey to be like, a kid making his own comic books in the hall, dreaming up adventures, talented and a little weird. I’m sure that Pilkey talked about this in an interview somewhere. From my book, The Big Book of Picture-Book Authors & Illustrators: 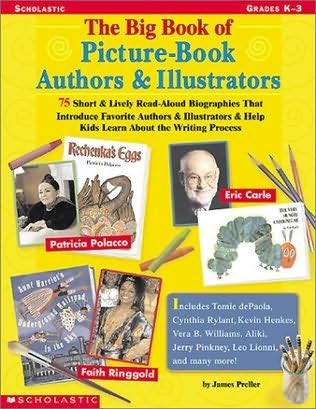 This outrageous behavior did not endear Dav to his teachers. “When I was in second grade, I got in trouble a lot. To punish me, my teacher would send me out into the hallway. Before long, I was spending so much time in the hall that my teacher moved a desk out there for me.”

Dav seized the opportunity by stuffing the desk with art supplies and paper. To keep himself busy, he drew pictures and made up stories. Dav didn’t realize it then, but he was preparing himself for his future career. “I used to staple sheets of paper together and write my own comic books,” he remembers. “I had invented a whole slew of amazing superheroes, including Captain Underpants, who flew around the city in his underwear giving wedgies to all the bad guys.”

Thus inspired, I wrote this scene:

George was drawing a picture and giggling to himself. Without looking up, he said, “Jigsaw, Mila. What’s what?”

“More like who’s who,” I said. “We’re working on a case. We’re wondering if you might have seen anything.”

George finished the picture. It showed a boy flying happily above the clouds. I looked closer. The boy in the picture looked exactly like George. He shoved the page under a stack of papers.

“What are you drawing, George?” Mila inquired.

“But in the meantime,” I said, “you’ll be happy making Mrs. Koosman bonkers.”

I stole a joke from Woody Allen in Chapter Eight. 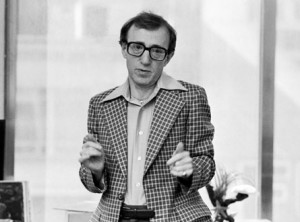 Somebody stole Bigs Maloney’s sneakers, forcing a cancellation of the game, and Jigsaw has to confront the prime suspect,  Lydia Zuckerman, the notorious Brown Street Bruiser. But before I get to the joke — and you’ll recognize it when it comes — I have to say that I’m happy with how Jigsaw stands up to Lydia in this scene. And also, how it was foreshadowed in the football game. Jigsaw’s character is consistent, even if his results may vary. The guy has got guts, and we see that in the very first chapter.

Lydia is big and tough, and she’s in the middle of her exercise routine:

“I’ve only got a few questions,” I offered.

Lydia grabbed a towel and ran it across her face. She started on a set of push-ups.

I stood beside her, arms on my hips. “I don’t want trouble,” I said. “But a witness saw you at the scene of a crime. I’m not leaving until you give me answers.”

“Bigs Maloney’s sneakers took a walk,” I told her. “Thing is, Bigs’s feet weren’t in them at the time.”

I turned to leave.

Lydia looked me up and down. “Hey, detective. You ever think about exercising?”

“I tried lifting weights once,” I answered. “But they were too heavy.” [Thanks, Woody!]

Thanks for listening! From what I can tell, this book is out-of-print and unavailable in stores. I can’t tell you how that feels.

POSTSCRIPT, 5/3/16: I originally wrote the above about seven years ago. Today I’m happy to announce that “Sneaker Sneak” will be brought back into print in the Spring of 2017. The title may be changed to The Case of the Smelly Sneaker.

Sleeping in the Baseball Hall of Fame

Living in Delmar, NY, we’re about 75 miles from Cooperstown, home of the Baseball Hall of Fame. Beautiful little town in the middle of nowhere, with a gorgeous lake and a lost-in-time feel. The museum offers a program called “Extra Innings,” where groups may come to spend the night. So a group of 36 local children, most of them accompanied by an adult, arrived at the museum at 6:00. The kids played a baseball trivia game, then had a scavenger hunt that brought them all over the museum — which was empty except for us. At 8:30, they watched “The Sandlot” in a small theater, lights out at 11:00. Didn’t sleep so great, but it was a great experience for young and old alike. 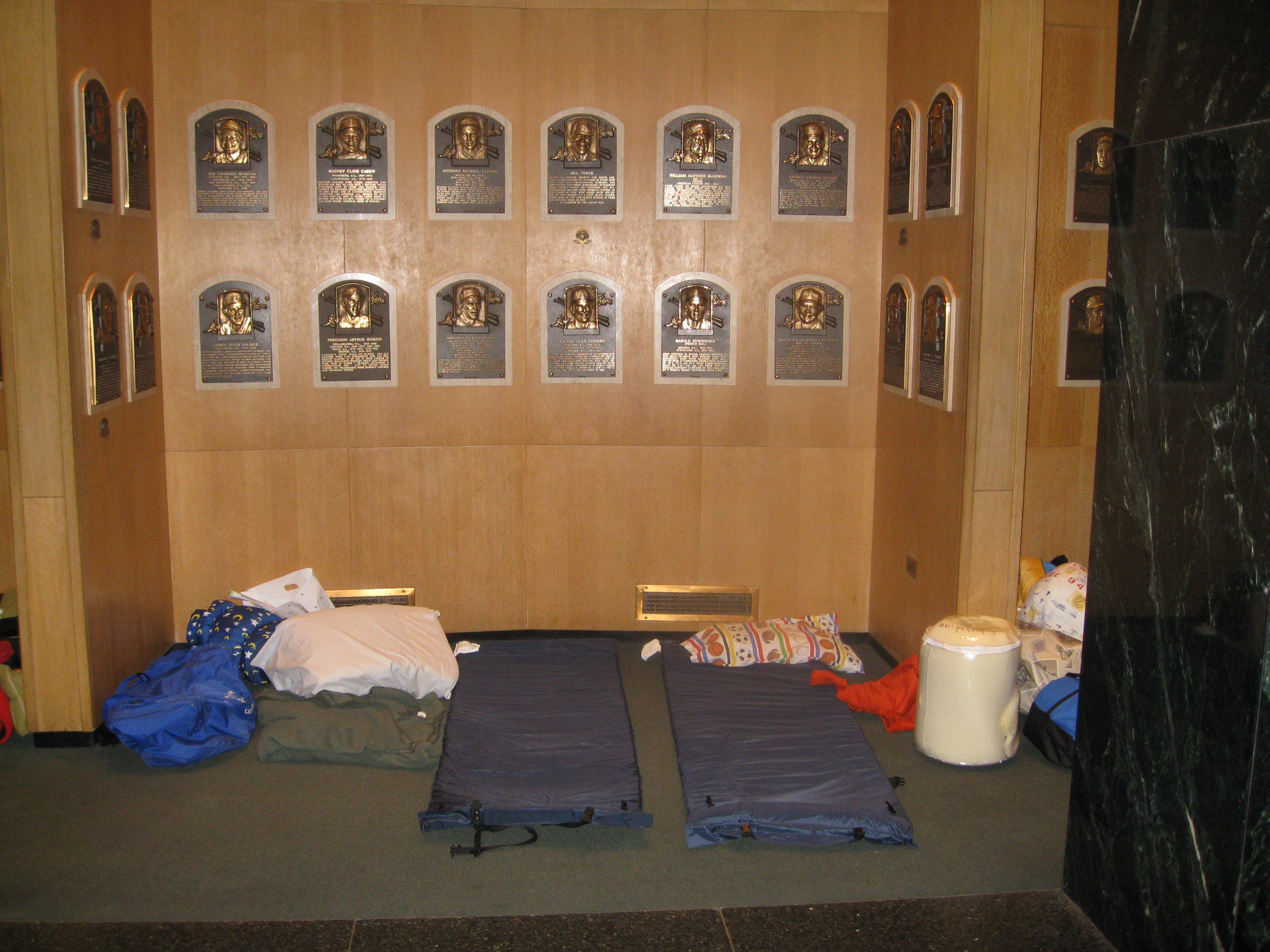 We all slept in the Gallery, where each Hall of Famer has his own plaque. While my favorite old-time players are Ted Williams and Christy Mathewson, we are Mets fans to the end, and there aren’t many Mets in the Hall of Fame. I believe the grand total is one. So we found Tom Seaver’s plaque and claimed our spot. 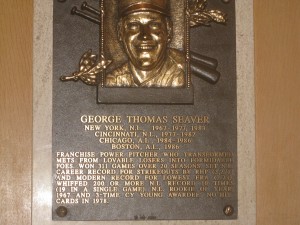 I enjoyed wandering around the near-empty museum, where I found a famous shoulder to lean on. 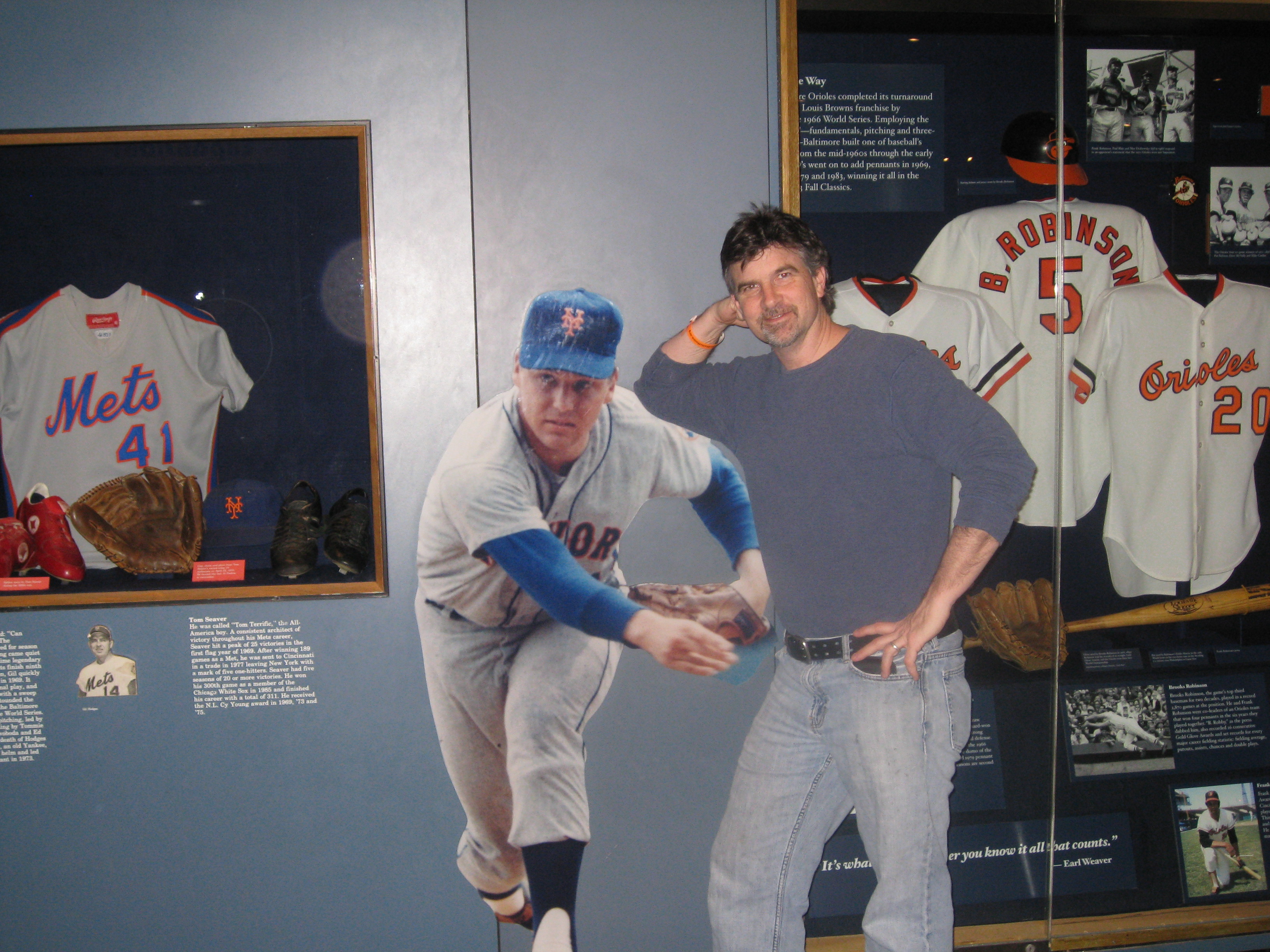 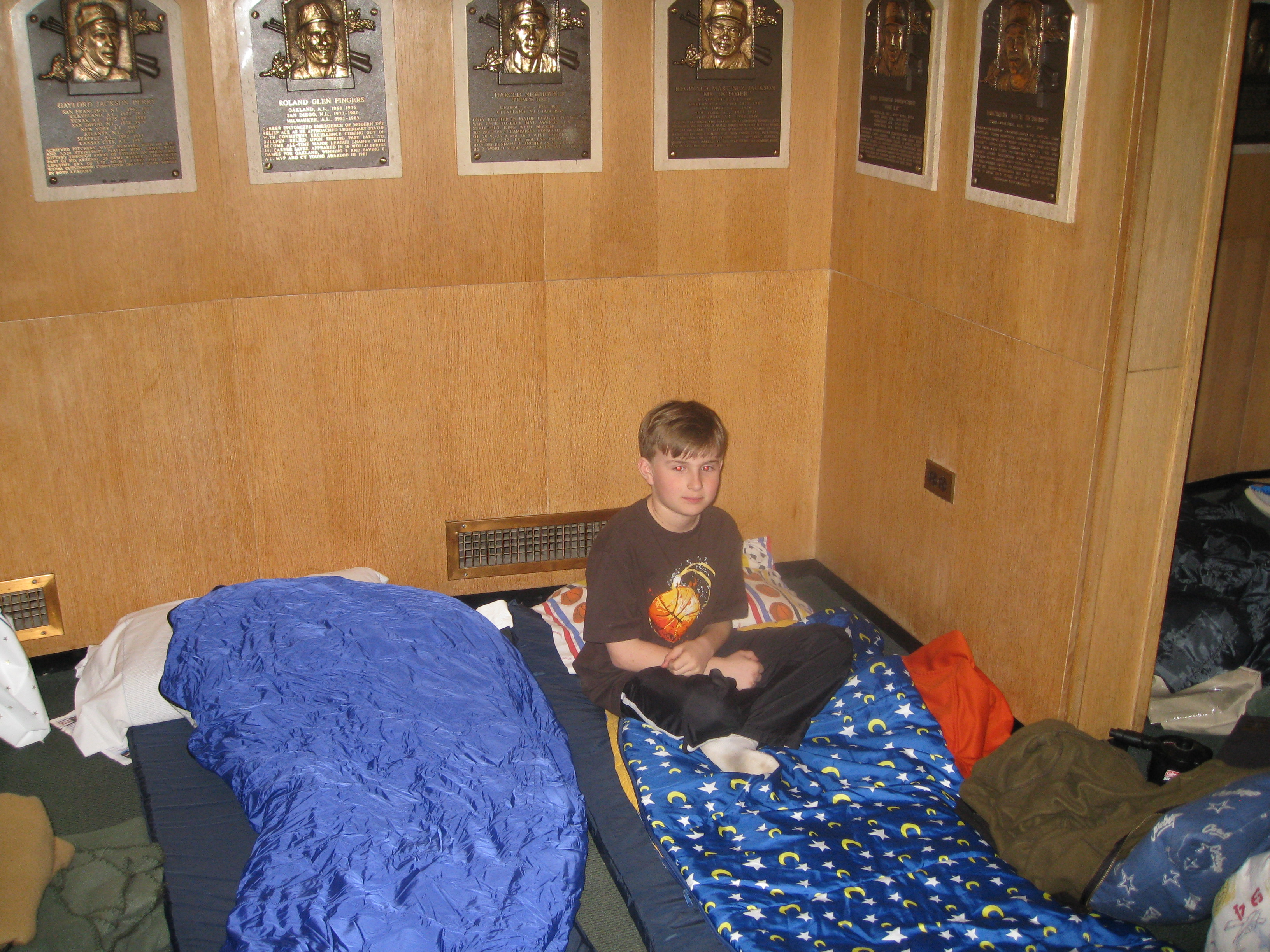 Maybe to most folks, that just seems like a bad night’s sleep. But we  counted ourselves lucky.