Tag Archive for Impact of comics on children’s books

One Question, Five Authors #3: “What influence have comic books had on your work?”

Welcome to the third installment of “One Question” — the world’s laziest interview series. Today the focus is on comic books, one of the great wellsprings of inspiration for so many talented writers and illustrators of children’s books.

Much thanks to our five guests below: Eric Velasquez, Bruce Coville, Matt McElligott, Charise Harper, and Alan Silberberg. Click on the “One Question” icon on the right sidebar, under “Categories,” to journey through time and space to visit past editions. 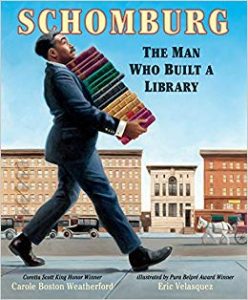 As you know comic books played a huge part in life. Comic books basically taught me how to read. I found an interest in the characters and stories that I could not find in the reading material in elementary school. I was also fortunate to have a very smart mother that would direct me to the dictionary if I did not understand a particular word in any of the comics, this would later prove to be a key factor in my development. Today,  I am so happy that schools are  embracing comic books as legitimate reading material for students. This makes a big difference in the lives of reluctant readers.

Now, in terms of my work, as a result of my love of comics I wanted to become a cartoonist. I went to the High School of Art and Design to study cartooning. However, in my senior year I was introduced to painting and the rest is history. Because I still love comics there are many aspects of comic book art in my work today, mostly my use of panels and dramatic angles. 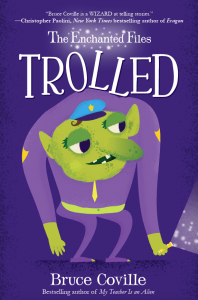 I was 11, and already an avid reader of comics, when Stan Lee unleashed the first issue of The Fantastic Four and launched what became a revolution in comics. That comic, and the cascade of newly created characters that soon followed, provided a real time example of how an art form (though calling comics an “art form” at that time would have generated howls of derisive laughter) could be reinvented and re-invigorated.

By the time I was in my mid-teens I was a devoted Marvel geek. In fact, my first published words were in Marvel letter columns. And, oh, how I wanted to write for them (much to my mother’s alarm).

Oddly, despite my devotion to Marvel, the very first money I made for something I wrote was the princely sum of ten dollars for a story concept I sold to DC’s The House of Mystery. Small change, yes . . . but as a first sale it helped give me confidence that I could be a writer.

Eventually I found my place writing prose for kids. But there is no doubt that comic books were a significant part of what put me on the path! 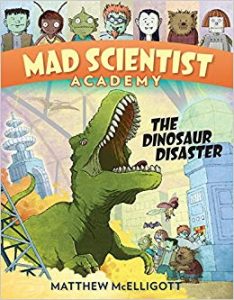 I can remember trading an action figure for my first stack of comics in second grade, then the excitement of bringing them home and spreading them out on the living room floor. They were a mix of titles, tattered and worn, and out of sequence. Some issues began in the middle of a larger story, and others ended with thrilling cliffhangers. The door was opened to a living, breathing world that was not quite fantasy, not quite reality, and I moved in and never really left.

Now, decades later, I understand that there are specific, formal reasons why that world was so enticing. Reading the works of Will Eisner and Understanding Comics by Scott McCloud really blew my mind, and I began to appreciate the formal structures that allow comics to do things no other medium can. Here’s an example I love to show my class: 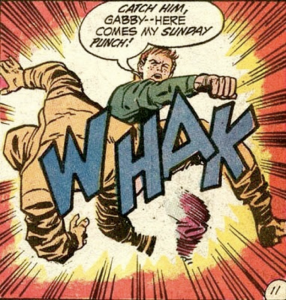 At first glance, this panel by Jack Kirby may not seem particularly noteworthy. In fact, it might seem kind of juvenile. But dig a little deeper and you’ll notice something really remarkable: this panel is showing us the past (the dialog), the present (WHAK), and the future (the recoil from the punch) all at the same time, and our brains don’t explode. How does that work?

I’m still trying to figure this stuff out, and it informs everything I do as an illustrator. Good thing I made that trade in second grade. 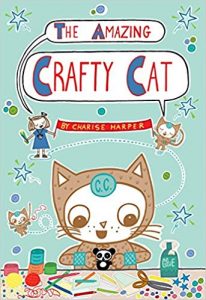 Words and pictures together makes sense to my brain.  My father is French, and when I was eight years old, my French grandmother started to live with us for six months of the year.  My brother and I could understand French and speak a little, but this was a big change for us.  Our house was instantly one hundred percent French speaking only.  Not only that, but our parents wanted us to read and write in French too.  So what did they do?  They bought us French comic books — lots of them.  This was huge!  At that point, I personally owned maybe six books.  My family did not have a lot of extra money, and now suddenly, we had stacks of Tintin and Asterix comic books.  My brother and I struggled through the books, looking at the pictures, deciphering the words and understanding more and more on each subsequent read.  These comic books changed my life.  They gave me an understanding of French humor, enabled me to interact with my grandmother and imbued me with a love of comics.  Using words and pictures together is my literary comfort food — my happy place. 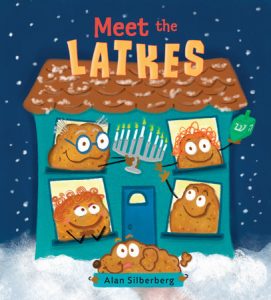 Confession: I was an Archies comic book fan. When the whole Marvel vs DC argument comes up at polite dinner parties  (I know geeky people!) I shrink back into the world of redheads and jugheads. I think reading stories about (unrealistic) high school where bullies and blondes and friendships were the norm gave me an idealized vision of life — that I liked to skewer in my writing. When the underground comics scene became (sort of) mainstream I was drawn to Ralph Bakshi and R.Crumb and other far out cartoonists and their styles. Jules Feifer’s early work and later Lynda Barry’s personal comics gave me a sense that telling my own stories visually was acceptable. In the Publishers Weekly review of Meet the Latkes, my cartooning style is described as “if I drew the book hopped up on chocolate gelt.”  And to me . . . that says it all!