This entry is the third in a series of posts following the creation of a single book cover. Here’s Part One and Part Two. Right now, let’s check in with artist R.W. Alley. 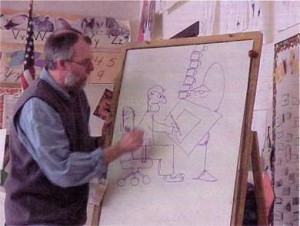 Do you ever receive a cover concept from the publisher and think, “Oh man, this won’t work,” or, “Gee, this is a really boring idea?”

The Jigsaw covers are very different from my other projects. Because of deadlines and the magic ways of publishing, I’m not given a chance to read the books before doing the covers. Now, there could be two reasons for this. One, is the above mentioned deadlines; the promo material for each title usually includes the cover art and this material is usually due while the book is still being written. Two, is that none of that is true and the editors simply don’t trust me to pick out the proper highlight to paint. I prefer answer one.

Of course this doesn’t answer your questions. Those answers would be “yes and yes.” My favorite editor silliness is when the spec reads in part, “Jigsaw in his tree house office, hears a noise, puts down his book, looks out the window, sees a shadowy figure which may or may not be a yeti making off with a glowing globe of uranium, and he, Jigsaw, runs after him, the yeti.” The problem is neither yeti nor uranium. Rather it’s the impossibility of showing our hero doing five things in one drawing.

Okay, I think I’ve got it. You have an irrational hatred of yetis.

Luckily, I think we’re OK for this cover.

How do you begin? Just coffee up and grab a sketchpad?

I put on my slippers, make some coffee, stare at the words on the paper, read the words on the paper, turn on the radio, become annoyed at the radio, put on a CD or even a record, tape some copy paper to my drawing table, notice there’s nothing on the paper, look at the old covers, try to think how to make this one different, pick up a pencil and start drawing. After a while, I notice a foul smell coming from the kitchen and realize I never poured the coffee I’d started two hours ago.

Specifically with this new cover — we’ll call it, “the skeleton in the closet gambit” — how did the concept strike you? I thought the flashlight angle was okay, in that it would give you something to work with, the whole light and dark thing. But I am concerned about the expression on Jigsaw’s face. I don’t want to see him terrified, you know; he’s Jigsaw, he’s got pluck! At this point, does that level of concern even enter the picture (literally) for you?

The first thing will be to get the general composition right. There’s a lot going on for a small image. School, closet, skeleton in general, skeleton hand with clue in particular. The flashlight will help to give a spotlight effect that will add interest and focus. As for Jigsaw’s expression, I completely agree with the pluck concept. However, this will be pinned down a little later.

You’ve done about 40 covers for the series. It must be difficult to keep things fresh — for “it” and for you. I mean, you can’t draw another picture of him writing in his journal, with yet another puzzled expression on his face. Can you?

The thing is that each drawing is a puzzle to be solved. Not too crazy different. Not too much like others. For this one, there are a couple of looking through door setups on other covers (not exactly the same, but there are doors), so I need to make sure this is somehow different.

What else are you working on these days? Are you excited about anything in particular?

The newest book is There’s a Wolf At the Door by the lovely Zoë B. Alley (October, 2008, Roaring Press). It’s a big picture book (11×14, 40 pages) in a comic panel format that retells five wolf-centric tales in a connected way. I am very, very happy to be working in this format. 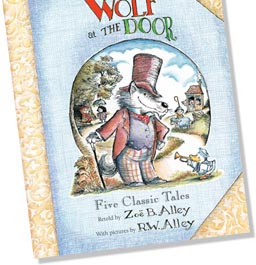 Those are some great choices. All-time favorite children’s book?

Two favorite children’s books at different ages: The Sailor Dog by Margaret Wise Brown, illustrated by Garth Williams. The Wind in the Willows by Kenneth Grahame and illustrated by Ernest Shepard.

Thanks so much, Bob. I’ll have to seek out The Sailor Dog. In over ten years, we’ve talked exactly once. It’s been interesting to learn about your creative process. Hopefully we won’t wait another decade until the next time.

PLEASE NOTE: In Part 4 of this series, coming this Friday, Bob has generously shared some of his sketches for the upcoming Jigsaw Jones book cover. You won’t believe how cool these are; even as the author, I’ve rarely felt this INSIDE the process. What a treat.

ALSO NOTE: Fan Mail Wednesday has been moved to Thursday. And, um, Thursday is now on Mondays, Tuesdays will appear on alternate weekends, casual Fridays now require dinner jackets, and Latin Nights have been moved to Bolivia. Just to clarify.

LASTLY: Here’s some links to the all the posts in this seven-part series: One, Two, Three, Four,  Five, and Six, and Seven. Read them all and experience the awe and wonder of the creative, collaborative process!

Category: Interviews & Appreciations, Jigsaw Jones / Tags: How a cover is made, Jigsaw Jones, Jigsaw Jones Cover, R.W. Alley, Scholastic, The Case of the Secret Skeleton, The Wolf at the Door, What's In a Book Cover?