Tag Archive for Why do we love birds?

On Birds and the Artist’s Sense of Wonder: A Conversation with Wendell Minor

“To me, birds represent the ultimate form of freedom.

To break the bonds of the earth

and to float in the sky

has fascinated man since the beginning of time.”

It’s hard to know what to say about Wendell Minor. The awards and achievements seem endless. And there always seems to be a new book coming out. In plain truth, Wendell has enjoyed five decades in the publishing world, beginning as a book cover designer and transitioning to children’s book illustrator and author. As a nature lover and history buff, he shares those interests with children through the books he has authored or co-authored with Jean Craighead George, Tony Johnston, Robert Burleigh, Charlotte Zolotow, Margaret Wise Brown, Buzz Aldrin, Mary Higgins Clark, and last but not least, his (fabulous!) wife Florence. His work has been exhibited in museums and galleries throughout the country. But mostly, today, I’m hoping he’ll indulge my newfound fascination with all things . . . avian. 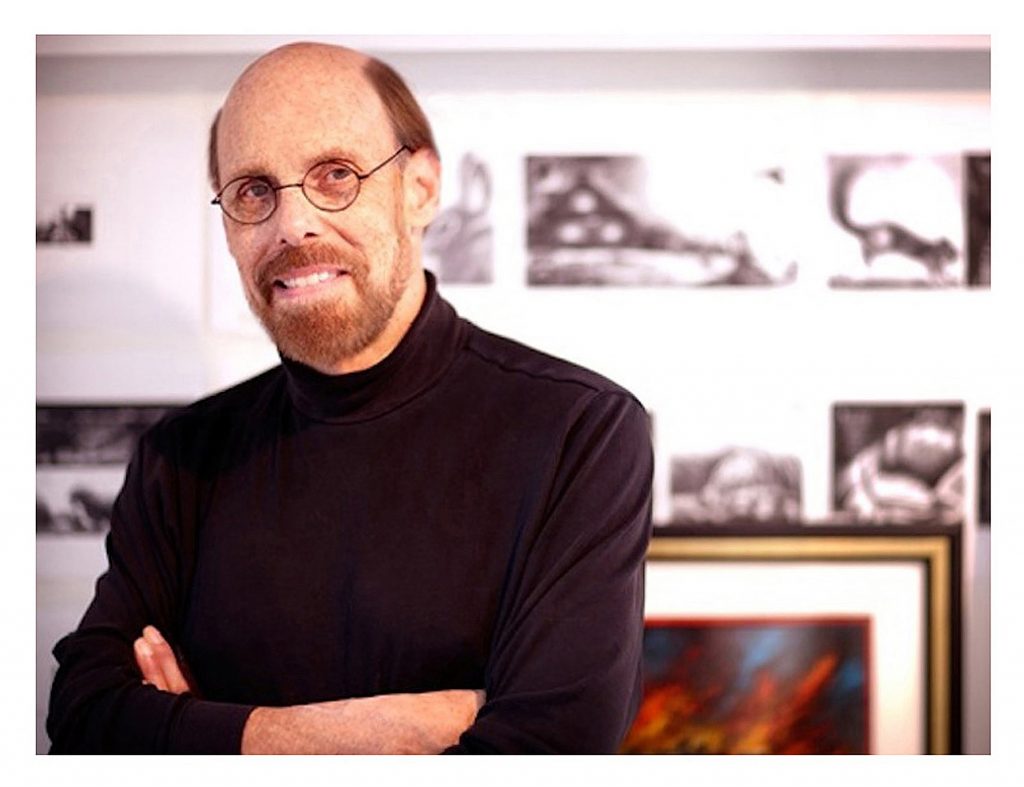 Greetings, Wendell, thanks for stopping by to talk about birds and, not coincidentally, your newest book, Tiny Bird. I find myself newly “woke” to the world of birds. I daresay I’ve become a beginning birder. It’s given me so much pleasure. 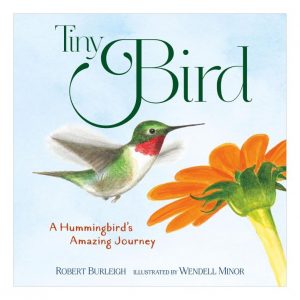 Hello James, I have to say I’ve been a bird watcher as long as I can remember. I did my first bird drawing when I was five years old. It was a giant Robin. I can’t imagine a world without birds. We have lost three billion birds in America since 1970! That’s about 30 percent of the total population. They are battling loss of habitat and climate change. We should never take them for granted. 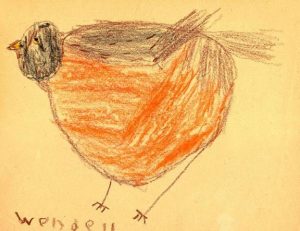 Illustration by Wendell Minor, age 5. Obviously, that poor kid is never going to make it.

I interviewed Ralph Fletcher on a similar theme a while back, because he photographs birds. You draw them. At its heart, the hobby of birding is about seeing. Noticing details. The shape of the tail feathers. The length of a beak. Stopping, pausing, reflecting. All the qualities one needs to become a good artist or writer. It feels spiritual.

To me, birds represent the ultimate form of freedom. To break the bonds of the earth and to float in the sky has fascinated man since the beginning of time. Seagulls inspired the Wright Brothers at Kittyhawk. Careful observations of these graceful birds led to the basic understanding of the principles of flight and the first successful flying machine. Who doesn’t want to fly? For me, it’s a creative spiritual experience. 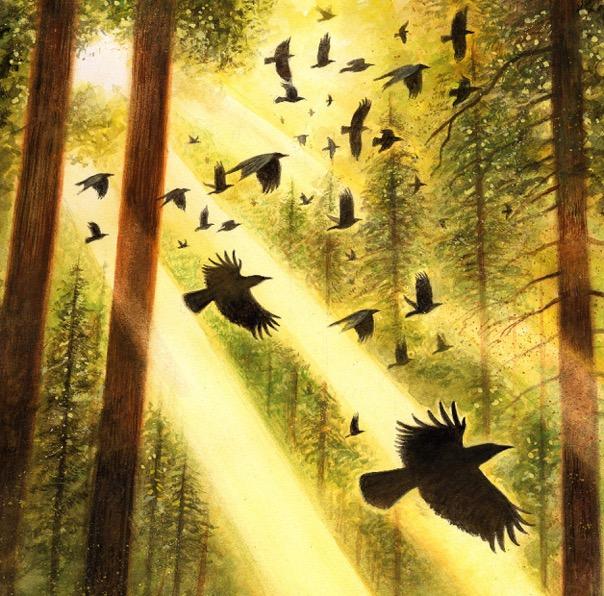 I’ve gone through the same experience with trees. Just waking up to them, noticing more and richer detail. I feel a little foolish about the lost time, but I’m grateful for the moments I’ve been given. It all links for me directly into becoming a better writer, being in the moment and attending to the thing itself. Again, that’s art, isn’t it?

Mother Nature keeps us humble. Perhaps Thoreau said it best: Simplify, simplify, simplify. “Without simplicity, it isn’t possible to live life to the fullest or really be able to be an integral part of nature and Man’s surroundings.” 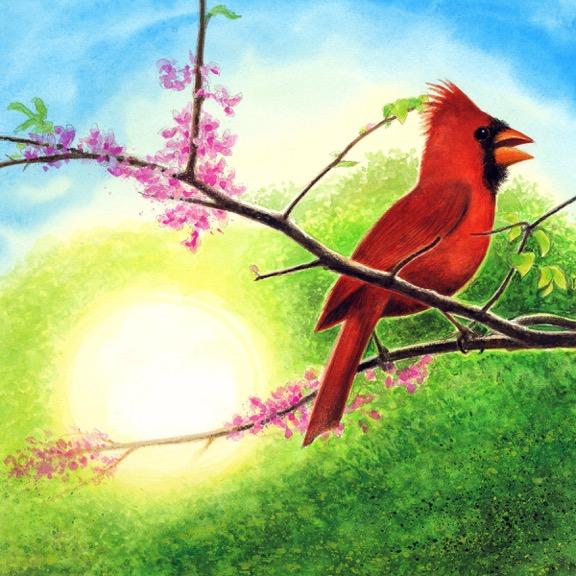 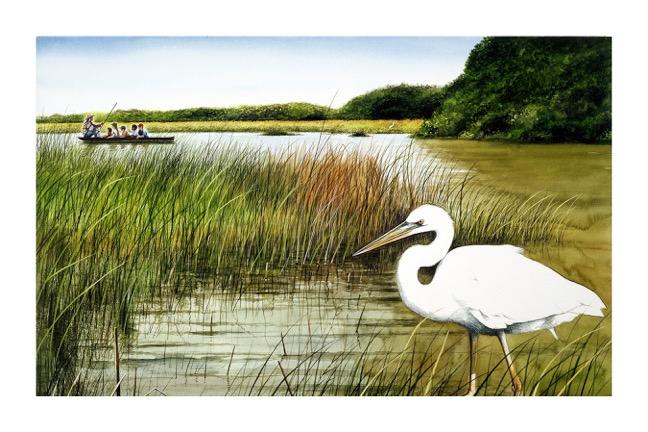 Do you use the Merlin app? It was created in partnership with the Cornell Lab of Ornithology. It’s an amazing resource to carry around in our magic phones. Very helpful in making identifications. Which has been another interesting discovery. There’s pleasure in not only seeing and appreciating a bird, but knowing its name: That’s a Tree Swallow, that’s a Cooper’s Hawk, that’s a Downy Woodpecker! Knowing what you are seeing increases the joy. 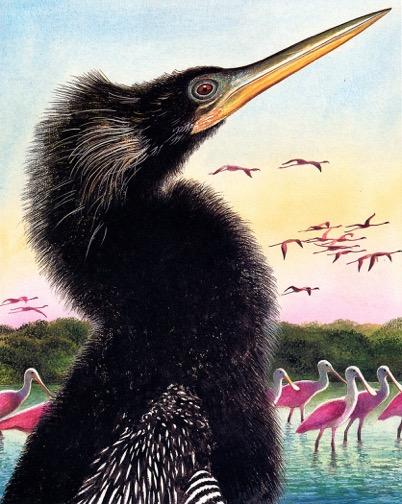 I use the Sibley and Peterson guide books plus a number of other books. I visit the Cornell site frequently. I decided to do a count of some of the birds I have illustrated over the years. Here’s a partial list:

Cardinal, and, of course, Hummingbirds. 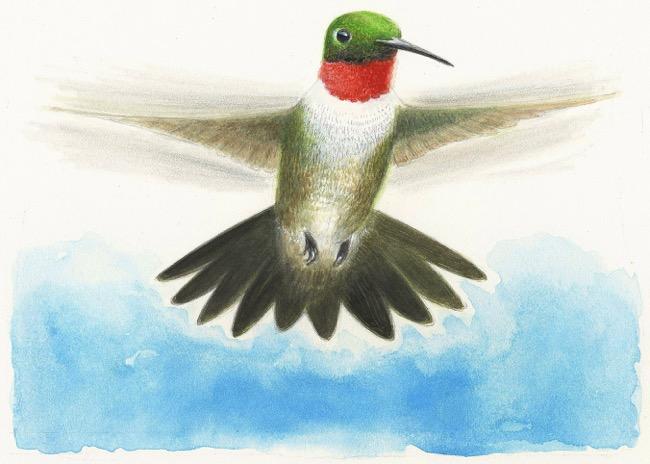 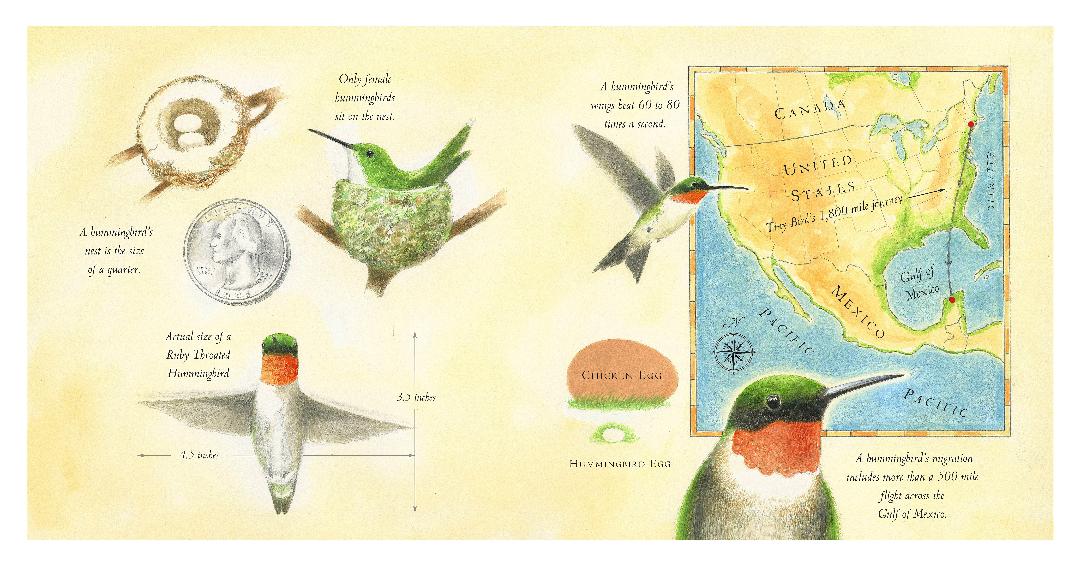 Let’s talk about your new book. Hummingbirds are tough little birds, aren’t they?

Hummingbirds are amazing! Tiny Bird: A Hummingbird’s Amazing Journey by Robert Burleigh was born out of our mutual interest in their astounding toughness for such tiny creatures. The book covers the cycle of migration of the Ruby Throated Hummingbird from Connecticut to Guatemala, roughly 1500 hundred miles. They fly solo for the entire trip, plus a five hundred mile leap across the Gulf of Mexico: twenty plus hours non-stop!

There’s a really cool website, Hummingbird Central, that features a live map of the hummingbird migration. What a staggering journey. I expect a few ruby-throated hummingbirds to show up in my backyard any day now. 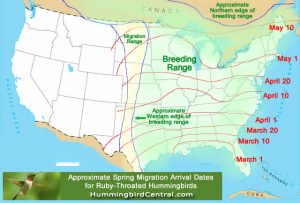 Here are a few of the things I learned: a hummingbird’s wings vibrate more than 50 beats per second. They are only about 3” long and weigh less than a penny! Only the female sits on the nest, which by the way is the size of a quarter. Hummingbirds come back to the same place every year. So if you see one in your backyard, you know they’ve traveled 15 hundred miles to be there! 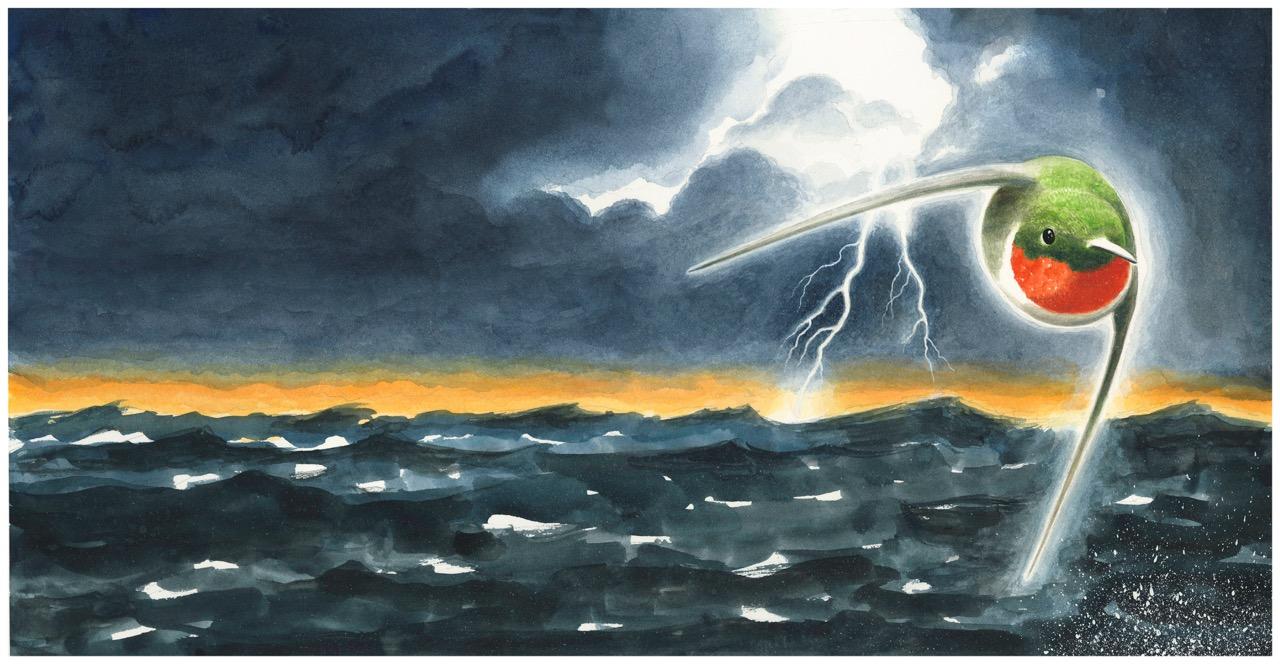 Here’s an image I particularly like, from your book Everglades by Jean Craighead George. It reminds me of a seabirds puzzle I used to love as a kid. I’m curious, have any of your illustrations been used as puzzles? 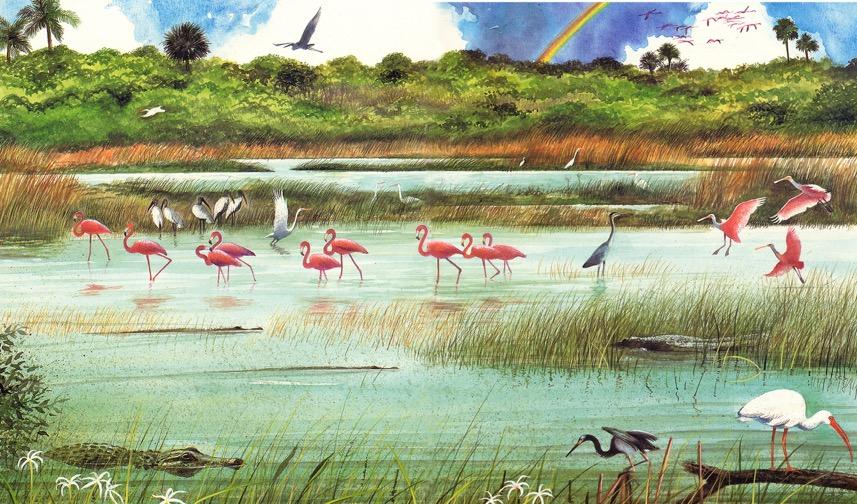 Thanks. That book has been in print since 1995! I had one book cover produced as a puzzle several years ago. The book was called Weed Rough by Douglas C. Jones. I have attached the illustration.
– 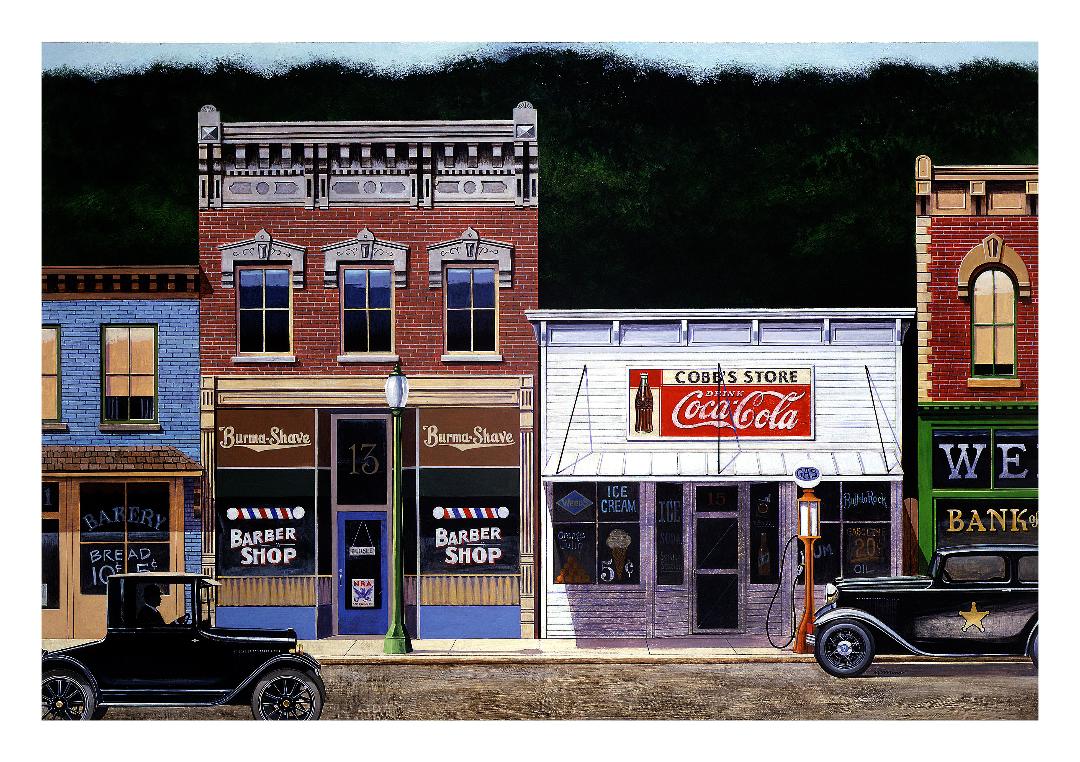 Ah, that’s so cool. A lot of us are doing puzzles these days. You’ve had a pretty remarkable career, Wendell. In addition to all your picture books and gallery shows, you’ve done quite an impressive array of book cover work, which tends to fly under the radar. Could you name a few we might recognize? I know you’ve done a version of To Kill a Mockingbird, a number of books by Pat Conroy and Jean Craighead George. Oh, just typing those names gives me a pang. We’re losing some of the great ones, aren’t we? 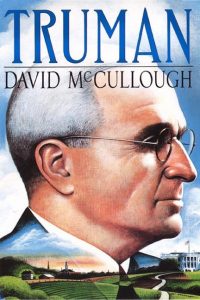 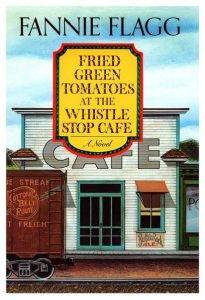 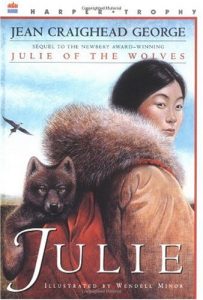 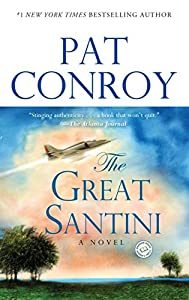 Yes, we are! Jean and Pat were my good friends for many years and I still miss them both. Over the years I’ve designed over 2000 book covers. A few that you might remember are David McCullough’s “Truman” and “The Path Between the Seas,” Pat Conroy’s “The Great Santini” and “The Prince of Tides,” Mary Higgins Clark’s “Where Are the Children?,” Toni Morrison’s “Sula,” and Fannie Flagg’s “ Fried Green Tomatoes at the Whistle Stop Cafe.” I could go on but that would take up too much space on the page.

How does that work? You get a manuscript and create a cover image from that? Or does an art director come to you with specific ideas? Covers are hard, so scrutinized by everyone in the publishing company, from editors to salespeople; I imagine there can be quite a lot of back and forth.

I do few covers these days, most of my time is spent doing picture books. I love the freedom of creating books for children. When doing an assignment for a book cover commission, I always insist on reading the manuscript. I owe that much to the authors who have spent months or years writing their books. I usually have the freedom to create my own vision for a cover; however I may do several concepts to navigate the many approval processes. Most of the time, my first sketch wins the day.

By the way, how’s my friend, the lovely Florence Minor doing? Have you two got another collaboration in the works?

Thanks for asking about Florence. She has completely recovered from her cancer surgery last year, and she’s feeling great! Her latest book is about kittens and all the amusing things they do. It’s looking great and will pub within a year from now. Florence sends you her best!

That’s good news. Okay, Wendell, thanks for swinging by. Maybe we’ll take a walk someday and you can be my birding guide. I can hear ’em, but they aren’t so easy to spot. I’ve got so much to learn.

It’s been a pleasure talking with you and I hope the Hummingbirds return to your backyard this year! See you at the next book festival as soon as we’re allowed.