Donovan, an 8th-grader, writes of Bystander: 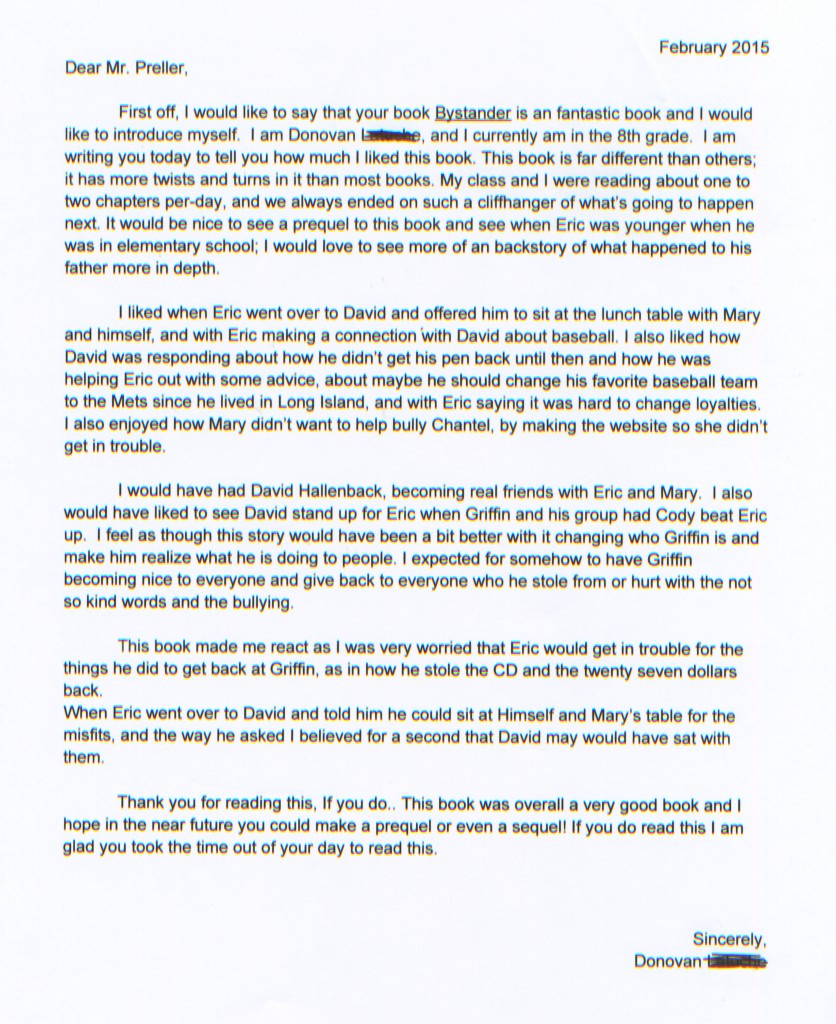 Thanks for your thoughtful, perceptive reading of the book. It’s all any writer can ever hope for: an insightful reader.

While many have asked me about a sequel, no one has ever suggested a prequel. So congratulations on your original mind. I blogged about the origins of Eric’s father a while back, so I’m including that link here; you might find it interesting.

In life, we have an inner default setting that returns to “fairness.” We want things to work out. It’s why the idea of karma is popular with so many people. And I recognize that this book doesn’t satisfy that longing. The world remains unsettled and off-balance. Griffin doesn’t seem to learn anything. For a variety of reasons, he remains on the wrong path. Such is life!

I am not a Disney-type writer, where everything works out beautifully in the end, wrapped in golden paper, tied with a bow. It wasn’t in me to write a book where Griffin learns valuable lessons and at the end everybody is friends. Sure, sometimes that happens. But sometimes, and quite often, it doesn’t. We all encounter various Griffins in our lives. I think, at best, we learn how to minimize their impact; we avoid them, protect ourselves and others. We don’t give them power over us. That was part of David’s mistake. His well-intentioned but ill-advised yearning for acceptance gave Griffin too much power.

Likewise, I agree, it would have been nice if David accepted Eric and Mary’s offer of friendship. They tried. But at that moment, David wasn’t ready. I have theories on why that is, but I’ll let you puzzle that out for yourself. I think there’s still hope for David, but perhaps he’ll be best-served if he finds a new friend who was not involved in this episode of his life. Who knows? Not me!

While I did not write a sequel to Bystander, I just wrote a book that returns to many of the themes and ideas of that book from a completely different perspective. It’s called The Fall and comes out late this summer, or early September. It’s written in the first-person, all told from the journal of one boy who was directly involved in bullying with tragic results. I think you’d like it, and I think you’d like him – even though he makes some awful mistakes.

P.S. Of course I read your letter, I was glad to get it!