A Paragraph from Rebecca Solnit’s ORWELL’S ROSES: “How Much He Recounted Enjoyment” Hang with me here for a minute. Rebecca Solnit’s first sentence on page 24 from Orwell’s Roses is a doozy — it carries a lot of weight — and I was tempted to not include it here. A challenging task for a distracted blog scroller like yourself, and maybe not necessary to convey the main idea from this brief excerpt, but I decided to roll with it. Who am I to omit even one sentence from Solnit’s brilliant paragraph, now with freshly-drawn stars and exclamation points in the marginalia of my copy. I defer to her genius. 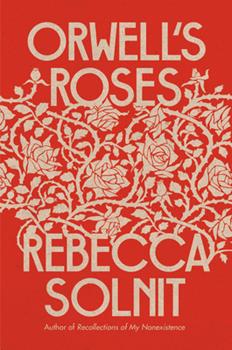 Perhaps his relentless scrutiny of the monstrosities and underlying dangers in the present and the future defines him, but it’s also been used to characterize him as though he was what he saw, or that was all he looked at. I returned to his writing after the roses startled me, and there I found another Orwell whose other perspectives seem to counterbalance his cold eye on political monstrosity. One of the striking things was how much he recounted enjoyment, from many forms of the domestic comfort that might be called coziness to ribald postcards, the pleasures of nineteenth-century American children’s books, British writers like Dickens, “good bad books,” and a host of other things, and most of all animals, plants, flowers, natural landscapes, gardening, the countryside, pleasures that surface over and over again in his books all the way through Nineteen Eighty-Four‘s lyrical evocation of the Golden Country and its light, trees, meadows, birdsong, and sense of freedom and release. That’s it, that is all. The thought for the day. Amidst the ugliness and the horror — perhaps even because of it — Orwell consistently took pleasure in the beauty, the joys, that life continually offers us. He planted a rose garden when the world was on the verge of horrific warfare.