Meet Sue Fondrie, 2011 Grand Prize Winner of the Bulwer-Lytton Fiction Contest for “Worst Opening Sentence in a Work of Fiction”

On Monday, July 25, Sue Fondrie was announced as the grand prize winner of the 2011 Bulwer-Lytton Fiction Contest. As a longtime fan (and occasional perpetrator) of spectacularly bad writing, I blogged that sucker up and, to my surprise, Sue dropped by with a comment. Medium story short: She agreed to satisfy my curiosity by answering a few questions.

Sue, I loved and admired your amazing sentence. Congratulations on the sweet, sweet victory. Tell us a little bit about yourself. What do you do for a living?

Is this victory sweet? I think it soured people on writing, really.

Not true! I think it takes a real appreciation of language to create something that egregiously bad. Just look at the popularity of the contest. We are delighted and charmed. Seriously: Great job.

For a living, I work with future teachers as an associate professor of Curriculum and Instruction at the University of Wisconsin Oshkosh. I teach the secondary English methods courses, the middle school education course, supervise student teachers in English language arts, and generally help students become teachers.

Let us gaze in awe once again upon your award-winning sentence:

How long did it take you to craft it? I can’t believe something that over-cooked could have been completed in a first draft.

Don’t tell anyone, but I cranked it out in a few minutes, initially. Then, as I always recommend to my students, I let it sit for a few weeks and then came back to work on it some more. Hmm, maybe I should’ve let it sit longer . . .

Have you entered the contest in previous years? What appeals to you about bad writing?

I’ve never entered before, although I’ve been following it for almost 20 years. What’s not to love about bad writing? It makes my own mediocre efforts seem acceptable.

You are an associate professor at a university, the land of ivory towers, usually a bastion for writing that is dry, tedious, filled with arcane language. The academic world has it’s own brand of bad. But your purple prose draws inspiration from . . . where, exactly? Can you site any specific sources? Just a hunch, but have you been reading the Twilight series?

If you read any of my academic writing, you’d see that dry and tedious describes it perfectly. I credit my Bulwer-Lytton win to being raised in a household of people who love a good pun and like to play with language. We often had long pun-filled contests on a central theme. And like any good teacher educator, I’ve read the Twilight series. 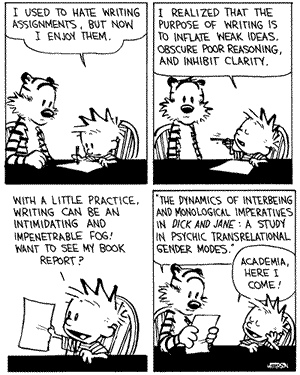 What next? I mean, is there a second sentence in the works? A chapter, a book? Do you have serious writing aspirations?

Sadly, I had but the one sentence in me. I’m going to rest on my rapidly decaying laurels. As for serious aspirations, I’m a superior technical writer and an appalling creative one. I’ll have to stick with academic efforts and the occasional (bad) fan fic effort.

Good luck, Sue. Thanks for stopping by. Your parting gift is on the way — a signed copy of my recent book, Bystander. And if you ever do write that next sentence, I’ll be eager to read it. In the meantime, I’ll be left with only forgotten memories and sparrow-like thoughts . . .

First, again, I’m just a little overwhelmed with things these days, so this blog hasn’t gotten the attention I’d like to give it. If I can work out some technical issues, I’ll be back with a wallop.

In the meantime, I’m rereading a book that begins with this sentence:

When I stepped out into the bright sunlight from the darkness of the movie house, I had only two things on my mind: Paul Newman and a ride home.

Yes, eerie to find Paul Newman here so near the day of his passing. Is that a great opening sentence? Shrug, I don’t know. It’s certainly not bad. It doesn’t try to do too much, isn’t flashy, doesn’t attempt to foreshadow the action. But it does give us, I think, a strong introduction to a singular narrative voice. A voice that is sure of itself, and at the same time, idiosyncratic and surprising. An original voice. In that way, more than a voice, but the mind behind it. There’s freshness here. I’m willing to read about this character. So, come to think of it, heck yeah, that’s a great first sentence!

Do you recognize the book? I bet my friend, Nan Hoekstra, does.

I must be on a rereading kick these days, because I recently finished Frederick Exley’s dark drunken dyspeptic classic, A Fan’s Notes. (I’m of the opinion that if you read a book more than 20 years ago, it doesn’t count; it’s like you never read it, since “you” now have a vastly different perspective on things: the dynamic of the book-reader relationship has changed so much that it offers an entirely new experience.)

What incredible language from Exley, what astonishing sentences! I underlined full paragraphs, made stars and check marks on practically every page, scribbled notes in the margins, circled words, really marked it up. Time and again, he drove me to the dictionary: termagant, sibilant, galvanic, execrable, cachinnate, exiguous, exigent, asperity, apostrophized, piddle, and so on. Some of those words I sort of knew, but hadn’t fully absorbed into my own daily vocabulary. But there’s this: Sort-of-vaguely knowing a thing is a close cousin to Knowing Nothing at all, but even worse, since you’re tempted to pretend that you know something when, in fact, you haven’t the foggiest idea — or, strictly speaking, you DO have the foggiest idea!

As a professional writer, I don’t like to admit to not knowing words. That’s like a carpenter staring into a toolbox, not knowing what he’s looking at. What does this thing do? But it’s best, I guess, to admit what we don’t know and try to do something about it. Like Bob Dylan sang: “He not busy being born/Is busy dying.”

Also: I suppose I’m gearing up for something as a writer, by reading back-to-back-to-back first person narratives. I have an idea in mind — not for the book I’m doing, or even the one after that, but maybe for the one after that — where I’m about ready to attempt a first-person narrative. Of course, I’ve done it dozens of times with my Jigsaw Jones mystery series. But those books are young, and short, and don’t have the language and depth and dark I’d like to attempt. So reading these (and while I’m at it, I should reread, yet again, J.D. Salinger’s Catcher in the Rye) inspires and instructs me for what I might attempt down the road. Writers learn by reading. Can you recommend other fine examples of first-person narratives? Anyone . . . anyone? . . . Doret . . . Liz . . . Bueller?

Lastly, I took a long drive to rainy Sunnyside on Sunday and listened to Randy Pausch’s The Last Lecture on CD. I know it’s been a runaway best-seller and huge cultural phenomenon, and that I’m awfully late to the show, but I’m just saying: Wow. I had tears in my eyes for 135 miles, but not in a maudlin way. Highly recommended. Uplifting, wise, entertaining, awesome.