Charles Dickens has been wildly (and unexpectedly) popular around here lately, with children’s authors speaking about him in revered tones, and not just because of the holiday season.

As Carmen Deedy, author of 14 Cows for America, told me in a recent interview:

I just re-read Great Expectations this summer, and there were places  where I laughed out loud. What a wordsmith, what a keen observer of human nature. Dickens made you see the human being within the characters. Why, even the loathsome and repulsive Miss Haversham (the elder) becomes a pitiable creature by book’s end. And his descriptions, and the marvelous names for his characters . . . ya know, I AM aware that it’s not cool to love Dickens anymore. I mean, a full page devoted to describing a room? But, oh, what a room . . .

What’s more, author Lewis Buzbee — in another recent interview — revealed that his new title, due in Fall, 2010, will be called The Haunting of Charles Dickens. And just the other day, I saw that my cyber-friend and fellow author, Kurtis Scaletta (Mudville), recently blogged a strong defense of Mr. Dickens’ great works. The money quote:

When people disparage classics as boring, stuffy books nobody wants to read, it’s clear they haven’t read Dickens, whose books are crammed with excitement, great characters, and everything we want a novel to be. That’s hardly surprising, since what we expect of a novel has largely been formed by the works of DIckens in the first place.

Oh, and that’s not all, dear friend of jamespreller.com. In an upcoming interview (we’re almost done!), author and all-around “book person” Deborah Kovacs gushes about Dickens, too. I’m telling you, it’s in the air, the great revival of interest in the old master.

From The New York Times:

Charles Dickens left behind one, and only one, manuscript for “A Christmas Carol,” the tale he wrote in 1843 of an unfeeling rich man and the boy who pricked his conscience. Kept under lock-and-key for much of the year at the Morgan Library and Museum, the manuscript is not widely available, one reason, perhaps, why it has been all but impossible to track the many revisions Dickens made to the manuscript as he struggled to get his story right. A high-resolution copy of the manuscript’s 66 pages, which you can examine below, may finally change that. 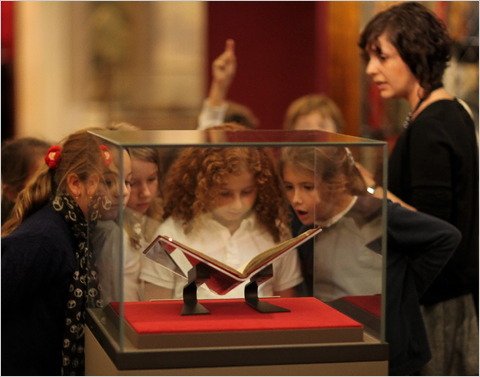 Click here you can examine each page of the manuscript, even toggle back and forth between hand-written and typed versions.

To read more about Dickens and the story behind this classic ghost story, written under financial pressure (that great motivator, fiscal panic!), click here and enjoy. For book lovers and those who enjoy the writing process, Christmas just came early.

One thing Carmen Deedy was wrong about: these days, it is very cool to like Dickens.