Tag Archive for Garfield Minus Garfield

I’ve praised this site before; it’s on my blogroll under Random Pleasures. Before Dan Walsh hit upon the idea of removing Garfield from these comics, I found them utterly useless and unfunny. But now there’s something entirely different, and deeper, going on. This post is just a reminder.

Category: Around the Web / Tags: Dan Walsh, Garfield Minus Garfield

I shared my love for Garfield Minus Garfield a while back. Here’s today’s post-meta-existential shot over the bow from Jon Arbuckle. I guess I’m someone who doesn’t love getting older . . . 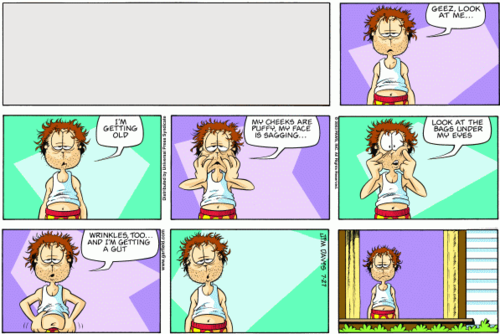 Garfield Minus Garfield: Greatest Thing Ever

This is genius. Maybe you’ve already seen it, because as usual I’m a little late to the party, but to me here’s this week’s “Greatest Thing Ever!”

As the website, created by Dan Walsh, explains: “Garfield Minus Garfield is a site dedicated to removing Garfield from the Garfield comic strips in order to reveal the existential angst of a certain young Mr. Jon Arbuckle. It is a journey deep into the mind of an isolated young everyman as he fights a losing battle against loneliness and depression in a quiet American suburb.”

I strongly urge you to check it out — a comic that would cause Jean Paul Sartre to cachinnate. And for the record, I’ve never, ever liked Garfield. This web sensation has gotten a lot of much-deserved press recently, here and here and here, plus there’s also going to be a book (and I totally want it)!