Tag Archive for Creating an outline

On school visits, I’m frequently asked about my writing process. I’m always a little stumped by this, since I’m not usually aware of having one, exactly. Certainly not a consistent one, from book to book, year to year, decade to decade. It changes.

Lately I’ve concluded there are times when I don’t want to write. I’ll start writing and grow bored before I get to the end of the sentence. My mind drifts, I’m not fully present. Which is a problem, since good writing is about focus and concentration. You have to be there.

My latest thinking is to accept this phase of my writing process — the non-writing part — and wait it out as productively I can. I’ve also come to understand that the Pre-Writing phase is deeper, more complicated and mysterious, that I originally imagined. It’s not just Brainstorming, it’s Serious Daydreaming. There’s more focus to it. If Brainstorming is wide, then this phase is narrower, more concentrated.

So my Writing Process, like Story itself, is something I make up as I go along. Only upon reflection can I really go, “Oh, that’s how I got here!”

Which brings me to my recent reliance on index cards. I don’t want to write, but I do need to remember and organize the story points in my head. So I scribble on cards. I can shuffle them later, and they will form a structure, or storyboard, for my story. It’s my way of creating an outline. 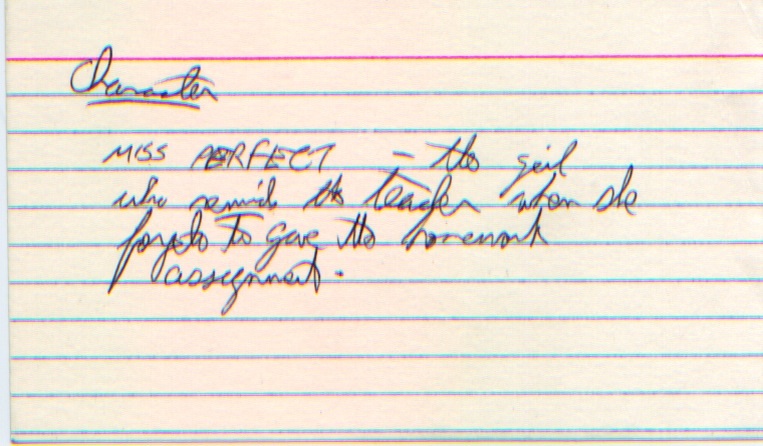 I had an idea for several students who are trapped in a school while scary things lurked outside. I needed to figure out these characters, who they were, why they were there, and whatnot. On this card, I hit upon a Telling Detail. One girl was the type who, as I wrote, “reminds the teacher when she forgets to give the homework assignment.”

It was like a door opening to character. I understood something essential about this girl immediately. And once you have character, then story ideas open up. 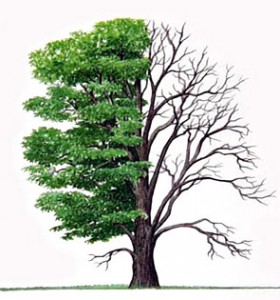 If character is the tree trunk; then story

is the many branches that grow from it.

Here’s a different kind of index card, for the same book: 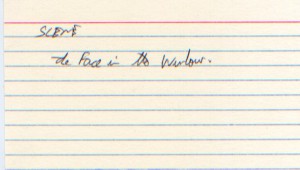 I wrote: “SCENE: The Face in the Window.”

Because, again, I didn’t feel up for writing it. And that’s the exact word to describe it, “up.” I need a degree of ooomph, zip, energy, drive in order to write well. I need to feel like it, I guess. Or maybe: I need to be ready. Yet when I jotted those words down on the card, I had a concept for a full scene in my mind. It was going to be the first time the kids got a good look at the horror outside of the school. Soon they would see the face in the window.

Here’s a snippet from an unedited draft that grew out of that index card. It’s actually the part the comes right before the face appears in the window:

The wind was still. Not a leaf stirred. High above a full moon appeared like a cloudy eye that stared, unblinking, through the gathering mist.

“There, see ‘em?” Carter put a hand on Esme’s back and pointed.

A murder of crows flapped and bickered near the figures, landing on heads and shoulders. None of the dark shapes seemed to mind.

“It’s people,” Miranda said. Her breath smelled like strawberry gum. She cracked it loudly and chewed.

Could this be real?

Esme saw, or thought she saw, through the fog, a crow peck at the face of one of the figures. Again, and again, the black scavenger plucked at the man’s eyes.