I get a lot of great letters from readers, but this one is particularly awesome because it’s from a future author . . . who maybe already writes better than me. Rats!

My name is Emily _____, age 11, and I wish to be an author someday. I read your story Bystander and loved it!  Although I didn’t like how the story ended between Eric and Griffin. I was expecting some sort of face off between them but it never happened. So, I wrote my own ending to the story. I go to school in Portland. I handed in the story into my teacher for her advice and she made a note that said (and i quote):

There are so many great qualities in this story — wow!

You should send this to author to read — really he will appreciate it i’m sure.

Anyway, so i decided to send it to you! here it is:

How Bystander should have ended…

It was November. A couple months have passed since Griffin and Eric interacted with one another. Griffin and his new crew ruled the halls of the school. Eric wished that if he imagined it enough Griffin would leave, but when you enter reality, it’s not something you can expect to happen.

Day by day, the boys exchange dirty looks with one another… until Eric decided to tell the  “Griffin crew,” who was boss.

“Ok, Griffin, I am going to tell you this, and I’m only going to say this once…” Eric said grabbing Griffin by the shirt.

“We need to settle this like men,” Eric spoke with rage.

“On the basketball court. If I win, you stop bullying people forever. But if you win, then I leave the school…forever.”

“Really? And who would be on your team?” Griffin snickered. Eric’s face turned pale as sleet.

“I can find a team,” Eric trembled as he spoke.  A crowd of people came fast, swarming like bees. Everyone was there. Then Eric heard a voice he hadn’t heard in a while.

“I’ll be on his team!” shouted a voice. Everyone looked back to see David Hallenback standing, head held high.

“Ha-ha. Are you kidding?! Hallenback you can’t even do a push up!” Griffin teased. Eric knew he couldn’t be a bystander again.

“I’ve seen him do a pushup!” Eric lied. David’s cheeks got less red as if Eric’s words soaked up all the embarrassment.

“Well you can only have two people on your team… who would join?”

Then Griffin heard a voice that he recognized call out:

“I will,” It was Cody. Who knew someone so annoying could be so kind?

“Uhh, dude! You’re in my crew!” Griffin called out.

“I ditched you remember?” Cody said. He walked over to Eric and high fived him. It was then three on Griffin’s team and three on Eric’s team. Griffin was with, a new kid named Caiden, and tomboy named Piper. Eric was with David and Cody.

“I beg to differ,” Eric smirked.

It was the day of the game and everyone was there. Eric’s team started with the ball. By the time it was almost over, Eric was losing, 39 to 40. There was 8 seconds on the clock. Griffin’s team had the ball. 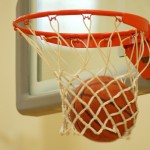 Thank you for your time.

Thank you for sharing your alternative ending to Bystander. I’m really impressed. I feel like a stranger handed me a gift out of the blue. “For me? Thank you.”

You are such a good writer. Great action and suspense. It’s smart how your brought basketball back into the story, a tale of justice settled on the “court.” Best of all, I think, was your convincing use of dialogue. To me, believable dialogue is the key to writing compelling, fast-paced stories with lively characters.

When I first started writing, I often got stuck writing long passages filled with interior thinking. Nobody every moved! You know what I mean? Those times when we’re trapped inside a character’s head. So he thinks and thinks and thinks, and shares with the reader lots of interior thoughts. But on the page, that can get boring very quickly. Nothing happens. It took me years to learn a lesson that you already instinctively know: get characters talking to each other, create conflict . . . and get out of the way! I guess it’s obvious, really. Good writing does both, it goes inside and outside. It’s important to get inside a character’s head, at least once in a while, but in terms of showing action — that is: showing, not telling — we need to give readers a clear picture of “the outside.” You do that masterfully.

The ending of Bystander has generated more comments than any other aspect of the book. When I wrote that final scene, I realized that it might not be satisfying in the conventional sense, especially to a reader with a sense of fairness. In stories and movies, we like to see the bad day get it in the end. But my ending was anti-climactic; I did not opt for the big dramatic finish (which you accomplished so well). I went the other direction. For me, I wrote the ending that I thought was most true to the world as I understood it, even if, well, it was not a storybook conclusion. But I hear you, Emily, and you are not wrong to feel the way you do. I just wanted you to know why I wrote the ending the way I did. I followed my own idea of true.

Thank you so much for your work. And thanks, too, for your fabulous teacher who suggested that you share it with me. I’m grateful to your both. Great job all around.

I’m sorry that it took me a couple of weeks to get back to you. I could sense your eagerness for a reply, but I’ve been deep into the final stages of a book — deadlines are tough, you know — and it’s been hard for me to address my growing (virtual) pile of letters. Plus, my mother-in-law has been visiting. And, well, maybe someday you’ll understand the difficulty of that particular distraction.

By the way, I have a companion book to Bystander coming out at the end of the summer, titled The Fall (Macmillan, 2015). It’s an entirely different story, all new characters, but in it I explore some of the same themes and issues found in Bystander. It’s probably a little bit darker, a little tougher. I’m really proud of it. As a writer, you probably how that feels.

I wish you a happy holiday, however you might celebrate this wintery season. As the band Devo said, “Merry Something To You!”