I’m happy about this positive review for The Fall in the July issue of Booklist.

“Readers will put this puzzle together, eager to see whether Sam ultimately accepts his role in Morgan’s death, and wanting to see the whole story of what one person could have, and should have, done for Morgan. Pair this with Jay Asher’s Thirteen Reasons Why (2007).” 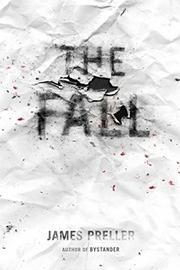 Sam Proctor is just an ordinary guy, neither an athlete nor a scholar. He goes with the flow, which is why he was part of the gang who piled on a girl named Morgan. A few comments on her home page, some name calling—it was harmless, right? But the taunts and posts grew uglier until Morgan stepped off the town’s water tower and killed herself. Sam now wonders about his culpability. At first, he rationalizes: he wasn’t the worst of the bullies, and it’s not like he pushed her off the edge. In short, episodic chapters, Preller provides readers with a rare glimpse into the mind of a bully (though Sam would never admit he is one). The pace is fast, yet the story unfolds slowly, one piece at a time. Readers will put this puzzle together, eager to see whether Sam ultimately accepts his role in Morgan’s death, and wanting to see the whole story of what one person could have, and should have, done for Morgan. Pair this with Jay Asher’s Thirteen Reasons Why (2007). — Teri Lesesne 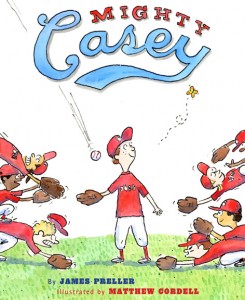 A friend of mine, author Joe Layden, sent along an email last night celebrating the fact that our books were both named by Booklist as “Top 10 Sports Books.” Joe’s amazing book — The Last Great Fight — was named in the Adult category. Six Innings was included in the Youth category.

Senior Editor at Booklist, Keir Graff, opened the article with this comment: “People who aren’t sports fans might assume that sports books aren’t worth their while.”

I guess that is the peril of publishing a hardcover sports book. There are adults who, perhaps for good reasons, won’t take a sports book seriously. But as Jean Feiwel, publisher at Feiwel & Friends, keeps saying, “Sports stories can run deep.” That was our shared goal with Six Innings, both in writing the book and in selling it. This wasn’t yet another color-by-numbers “Lefty at Shortstop” type sports story; it was, hopefully, something deeper. As deep as, um, a real book. Hey, why not? Fortunately for me, I was published by some great people who were committed to this book as literature: Jean, who signed it up (and for the fortuitous story behind that, click away!); Liz Szabla, AKA “The Super Scout,” with her incredible eye for detail, who shaped it; and Rich Deas, art director, who put together the package. It’s a cliche and it sounds trite, but, aw, heck: I could not have done it without them. Not even close.

This glorious tribute highlights both the thrilling action of a fight and the deep, intimate history of the Brooklyn gym where “the world works out.”

This title in the Wild Wheels! series showcases the allure that has made racing one of the most popular sports on the planet in an informative and anecdotal fashion, complete with stunning photos of some of the world’s fastest machines.

Carroll’s classic nonsense poem is brought to life on an urban basketball court, with intensely colored, energetic art in which a lighter-than-air young man challenges the menacing, 20-foot-tall Jabberwock.

Park skillfully melds die-hard fandom with life’s larger struggles in this memorable novel of Maggie, a young Brooklyn Dodgers fan, who knows all too well the familiar mantra “Wait till next year.”

This graphic novel follows a fictional ex–Negro Leaguer, Emmet Wilson, whose brief encounter with Satchel Paige, an iconic force against Jim Crow laws, inspires him as he battles racism in the 1940s South.

A cross-country bicycle trek serves as the background of this resonant coming-of-age story of best friends testing the bounds of their friendship and learning how to let go.

The strategies and surprises of a championship Little League game form the backbone of this action-packed story marked by well-rounded characterizations, from bench clown to slugger to game announcer.

Collier’s explosive artwork is coupled with 12 rhyming poems that capture the larger-than-life personality of Muhammad Ali and echo those peculiar, taunting rhymes so powerfully ingrained in our boxing, and cultural, lore.

Told from an insider’s point of view and featuring unforgettable portraits of Josh Gibson, Satchel Paige, and many more, Nelson’s tribute to the men whose determination and skill paved the way to breaking the color barrier in baseball is a towering achievement.

Just as exciting as the on-the-field exploits of soccer’s greatest star learning to master the game is the story of his poverty-stricken childhood in Brazil.