Dick Robinson, Chairman, President, and CEO of Scholastic (1937-2021): A Few Memories from the Wayback

I felt a pang when I learned of the passing of Dick Robinson, chairman, president, and CEO of Scholastic. Part of that was nostalgia for a long ago time in my life, but also that I had interacted with him, saw him in the halls and elevators, and respected him.

After a hazy period of cutting lawns and waiting tables, I got my first real job after college in 1985 at Scholastic, Inc., on 730 Broadway, two blocks east from Washington Square Park. I was hired as a junior copywriter to write the SeeSaw Book Club. I was also assigned the role of copywriter for the Text Division, run by Eleanor Angeles and Loretta Marion. I wrote the bulk of their catalog copy, plus ads and direct mail packages.

As it happened, it was a tradition for Dick Robinson to write an intro letter on the inside cover of the main catalogs. Only he didn’t write the letters. He rewrote them.

I was elected to be the guy — a young whelp earning a cool $11,500 a year — who would write Dick Robinson’s letters. I’d navigate the long hallway to his office on the 10th floor for a brief discussion. Just the two of us. I wasn’t nervous; curiously, he seemed more nervous than me. Dick Robinson wasn’t an easy conversationalist, nor did he possess a breezy charm. But he was always kind, authentic, never intimidating. There was nothing to be nervous about. We’d talk a bit — he had a deep love for the Magazines Division, and Scope texts, which his father pioneered, and the company’s overarching mission — and I’d go off and try to write something that wasn’t too terrible.

The next day I’d drop a couple of not-altogether-awful, double-spaced pages into his mailbox.

Then he’d rewrite the crap out it. 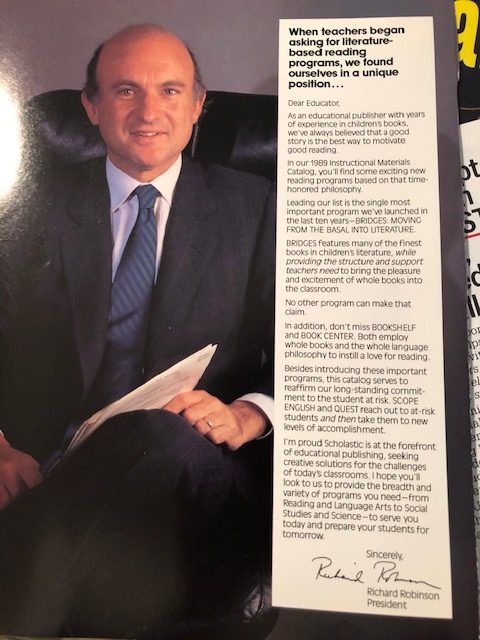 But he was decent about it, always with a smile, his pen moving across the pages, crossing out sentences, tweaking phrases, inserting a new introduction, gently cutting my work to ribbons.

For my first few years with Scholastic — and this became a regular joke with my pals Holly Kowitt and Craig Walker — whenever I’d see him in the elevator he’d turn to me and say, “Hello, Jim. Writing lots of copy?”

I always assured him that I was.

So I got to know the man in that peculiar fashion. Not as the decision-maker at the head of the table. I wasn’t privy to that side of his business acumen. I only met the gentle, halting, vaguely ill-at-ease man who walked the halls like an avuncular school principal. He knew everyone’s name and, mnemonically, I believe, remembered what we did.

In my case, I imagine that his interior Rolodex read: Jimmy Preller, writes copy.

I remember overseeing a poster that showed a map of the world. It was another project for the Text Division. There was some copy in a sidebar and the poster was used as a promotional giveaway for a new Social Studies textbook. Unfortunately there was a typo in it and Dick was the one — of all people! — who found it. Turns out we spelled hungry wrong. The country. Ugh. (It’s Hungary, grrrr.) So that sucked. Dick wasn’t mean about it, he never raised his voice, but I felt bad and he wanted me to feel bad, too. I still do feel embarrassed by it, that dopey mistake.

I let the old man down.

Not long before I arrived at Scholastic, in 1985, there had been a tough profile on Dick in The New York Times Business Section. Scholastic struggled in the early 80s. There were missteps and miscalculations and significant losses. The company went all-in on computing a little too soon, and ineffectually. The Times article, as I recall, brutally summed it up as: He took over his father’s company and flushed it down the drain.

It was rough stuff.

I think about how that article must have devastated him. A knife to the heart. Public humiliation from the old Gray Lady, the voice of record, The New York Times. And what did Dick Robinson do? He quietly persevered. He made some great hires. He brought in Dick Krinsley, who in turn hired Barbara Marcus (my first boss), and Jean Feiwel, a dynamic combination, to take over Book Group. He leaned more heavily on Ed Monagle and Dick Spaulding. I’m sure there were other people that I’ve failed to mention who played instrumental roles. Together, that small, tight, smart group helped turn the company’s fortunes around. 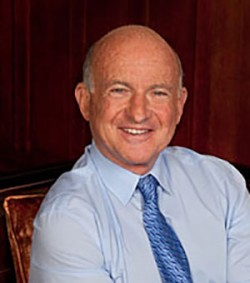 Dick Robinson, justly protective of his family’s legacy, built a business that would have made any father proud.