Sylvia Plath’s “The Bell Jar” as It Figures in My Book, “The Fall”

It began almost twenty-five years ago when I first started writing the Jigsaw Jones Mystery Series. I’d drop quick references to actual books that my characters were reading. Bunnicula, Shiloh, Nate the Great, and so on. Sometimes I’d do more with it, as in The Great Sled Race, where Jigsaw’s class is reading Stone Fox by John Reynolds Gardiner. In another example, The Case of the Buried Treasure, the students in room 201 had to do a “story maps” assignment based on Wolf in the Snow, the 2018 Caldecott Medal Winner by Matthew Cordell. This strategy was a nod of appreciation and a  way to connect the real world with Jigsaw’s fictional world. Maybe a reader would think, Hey, I read that book, too!

I carried on that tradition over to longer works for middle-grade readers and beyond. It wasn’t a plan, exactly, it just sort of happened. In some ways, it poses a good question for a writer 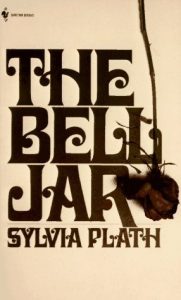 to ask of any character: What book would this person love? In Blood Mountain, there’s a former marine with PTSD. He’s living off the grid in the mountains. The dog-eared book he carries around is Lau Tsu’s Tao Te Ching. The fact of that book served as an entrance point into the struggles and mindset of the character.

For The Fall, I used Sylvia Plath’s The Bell Jar. There was a time in our world when seemingly everyone read that book — I remember grabbing it off an older sister’s bookshelf. I decided to make The Bell Jar an important book for Morgan Mallen. It was fascinating for me to read it again through the eyes of that character. After Morgan’s death, by suicide, the book finds its way to The Fall’s narrator, Sam.

Here’s one passage where Plath’s book comes into play:

Morgan had marked up The Bell Jar here and there, little checkmarks and passages underlined. 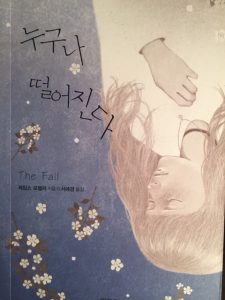 The evocative, transcendent cover of the Japanese translation of THE FALL.

I never found my name in it. There was no secret message. Believe me, I looked.

“I shut my eyes and all the world drops dead” was underlined in red.

There was a loopy star next to “I wanted to be where nobody I knew could ever come.”

Another star: “I had nothing to look forward to.”

It was that kind of book, and I guess Morgan was that kind of girl. There was a sadness inside her, a darkness I couldn’t touch. Strange as it seems, all the while I imagined her reading those words, dragging her pen under important sentences, drawing stars in the margins.

Reading is the most along thing in the world.

But she was with me the whole time.

Weirdness. The book brought us closer, across time and impossible distance. We shared this. 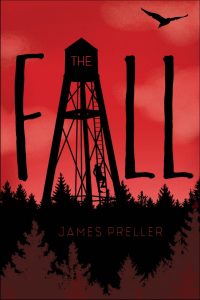