I just opened a package that gave me shivers. Even, yes, a little warm pressure behind the eyes. For the brown padded envelope contained Advance Reader’s Copies of the Jigsaw Jones book, The Case from Outer Space, published by Macmillan. I have a few things to say, but let me start here:

Look at the new cover design, look at the terrific illustration by R.W. Alley, look at . . . Joey and Mila and Jigsaw. 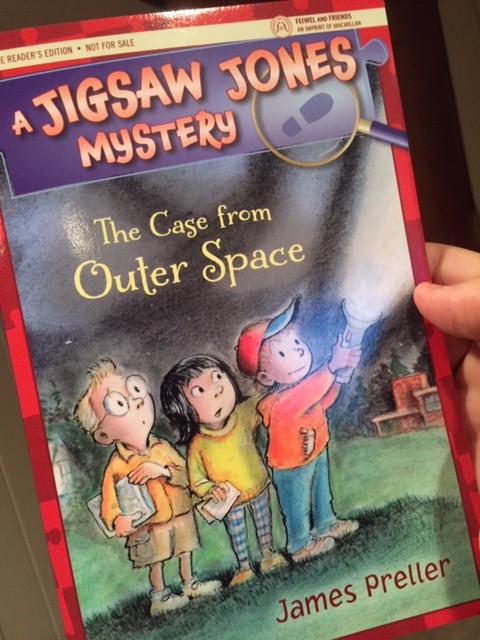 I wrote the first Jigsaw Jones mystery back in 1997 for Scholastic. To date, there are 40 titles in all, and more than 10 million copies have been sold, mostly through Scholastic Book Clubs. I’ve visited many schools as a guest author, and I’ve met a lot of young readers and teachers who know and enjoy those books. However, there’s really been nothing new for about ten years; Scholastic made a business decision to allow the series to die on the vine, with book after book slowly, painfully going out of print.

I put my heart into those characters. It’s the work for which I’m best recognized. I can’t easily convey how it felt to see those books fade into oblivion. I still receive letters from parents asking where they could get them. The note would explain that it was the first chapter book their a child had read by himself. I’d have to reply, “Try Craig’s List or eBay,” and a small dagger would slice into my soul. It was more than the disappointment of watching 40 books go out of print. It felt like a huge part of my career was being erased. All that work, the time and love, the accomplishment: poof, vaporized.

Oh well, right? That’s the deal. Writers go through this all the time. Publishing is a tough racket. Write something new.

But guess what? Jigsaw refused to go gentle into that good night. The books hung around in classrooms. There’s even a touring musical that still comes around, created by ArtsPower. Thanks to the efforts of three fierce women in publishing — my agent, Rosemary Stimola, along with Liz Szabla and Jean Feiwel at Macmillan — Jigsaw has found a new home, and new life. Jigsaw Jones is back. The immediate plan is to bring out this new title in the summer of 2017 (20 years after the first one), along with four newly updated classroom classics. In 2018, there will be at least four more, and hopefully I’ll get the chance to write another new one. These are books that have not been available in stores for a long, long while. 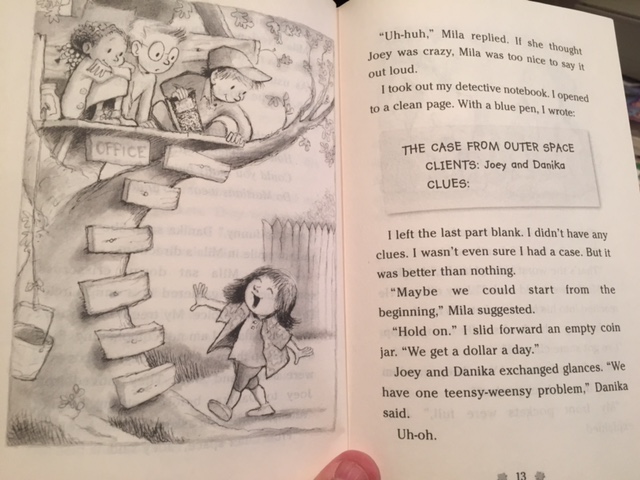 Illustration by R. W. Alley, pages 12-13 from THE CASE FROM OUTER SPACE. Available this summer from Macmillan.

I hope that Jigsaw and his friends are discovered by a next generation of young readers. I hope that maybe a little cheer will go up in various classrooms around the country. But today I won’t worry about that. Today I’ll just hold this beautiful Advance Reader’s Copy in my hands, grateful for everything, and just smile, proudly.