I received this note from Ethan, who likes my style. But before I get to that, I should note that 98% of my fan mail comes during the school year, and many arrive with the aroma of “assignment.” That’s not a bad thing, mind you, just reality. In today’s case, this is a letter I received in late July, along with a stamped and self-addressed envelope (love that!). I can’t help but sense a  parent’s helping hand making this all possible.

I don’t know where I’m going with that observation. Except to say that behind every enthusiastic reader, there’s usually a loving adult helping to cultivate & nurture that experience. Thank you for that, and for this: 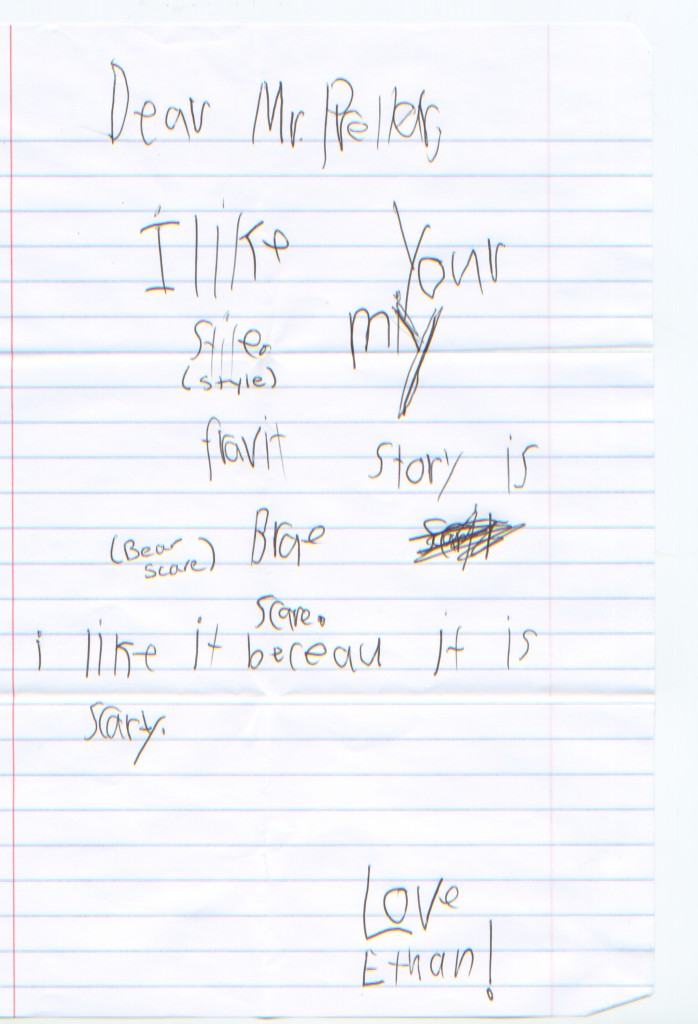 Thank you for your letter. I am pleased to learn that you like my style. Yes, style points!

You know, it seems like every Spring there’s an incident in Upstate, New York (where we both live), when a bear wanders out of the woods and into a town, or near stores, or into someone’s backyard. It’s a worrying thing, because bears are big, strong,  wild animals. Often, animal control has to get involved for everyone’s safety. I read articles like this in the newspaper every year.

I wondered why this happens, so I found an animal expert. He told me that bears are “territorial,” they like to have their own area –- a territory is like the property of your house –- and that sometimes a big male bear will make a smaller male go find his own territory. They don’t like to share. So the young male goes looking for somewhere to live, and sometimes he gets confused, make a few wrong turns, and ends up at Crossgates Shopping Mall. Yikes! What’s a bear doing at Banana Republic? The poor bear is lost. Bears don’t want to hurt people –- bears are usually shy; they don’t look for trouble -– but bears can be dangerous. It’s a sad and scary situation for everybody.

Writers often start with “what if?” questions. And that’s how I began The Case of the Bear Scare. I’m so glad you read it. Thank you. 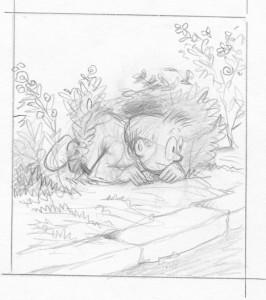 This is a rough sketch for an illustration in my upcoming Jigsaw Jones book, THE CASE FROM OUTER SPACE, illustrated by my pal R.W. Alley. The character depicted here is Joey Pignattano on a stake-out.

I just finished a new Jigsaw Jones book titled The Case from Outer Space. It will be out in the summer of 2017 and it’s pretty funny. I hope you check it out. My newest book is called The Courage Test (grades 4-7) and comes out in September. And guess what? There’s a mama bear in it, and a boy hiking in the woods of Idaho . . .

Stay cool and have a great summer!