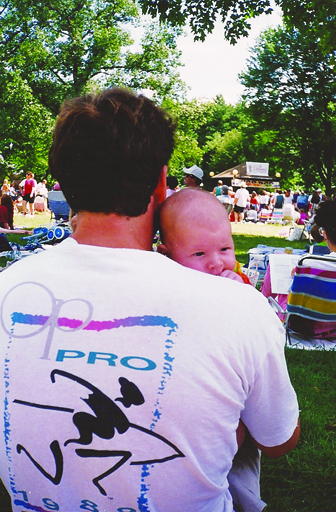 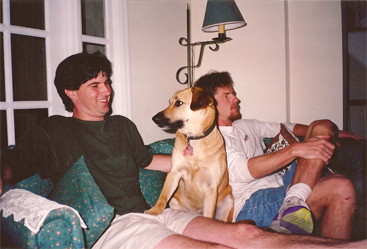 –
Glad to unearth this old shot of me, my dog, and Rex.
–
What I now understand is that friendship has its own grip. We might loosen our connection, but the friendship — that thing, whatever it was —  never lets go. Anyone who was ever a friend, no matter how ephemeral, carves a permanent place in the heart. We might forget that in our headlong rush to the next and the next and the next, the busy itinerary of our days, but these recent years I find myself remembering those friends more and more.
–
Regrets, yes. The could haves and should haves. But mostly this: appreciation for what once was. Gratefulness. Forgiveness. Love.
–
Rex was one of those guys. A good guy who passed through and left a mark, like scrimshaw on whale bone. Rex was here. And despite the fact we haven’t spoken in years and years (and perhaps we both should have been better friends), I mourn his passing, raise a glass to his memory, send my best thoughts to Kathleen and Sebastian, and cry a few tears.
–
Rex was a friend of mine, and no matter how much rain and sadness we endure, that stuff never, ever washes away. He will be missed.
–
Category: Around the Web, Current Events / Tags: Albany Times Union Babin, Kathleen Babin, Rex Babin, Rex Babin political cartoonist, Rex Babin remembered, Rex Babin youtube, Sebastian Babin, The Sacramento Bee