I always consider it a small triumph when a new television show hits the airwaves, and later gets cancelled, before I catch an episode. It’s like avoiding a drowning, a vortex of suck I managed to swim past.

The title of one recent show always makes me laugh, however joylessly. Yes, I’m talking about “Rizzoli and Isles.” In a cultural time when we have movies carrying insipid titles like “Bad Teacher” and “Ballistic: Ecks vs. Sever,” I suppose we should view the title “Rizzoli and Isles” as if it sprang from the loins of the great poets of the 18th century.

Correction: After some (very) quick research, I realize that “Rizzoli and Isles” is in its second season — what, no one told me Angie Harmon had a new show? Given that this is 2011, I don’t have to explain this is no “Cagney & Lacey.” 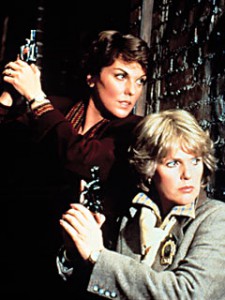 No, Rizzoli and Isles have names like wind chimes, names that writers had to conjure up like wizards, names whispered by the muse: Rizzoli. Isles. Names like that don’t just happen willy-nilly. Somebody very smart, possibly with a Masters in Creative Writing, had to dream ’em up. And, later, hire a marketing firm to test the names with a six different focus groups in the Mall of America.

Here’s the tagline to a recent print advertisement: 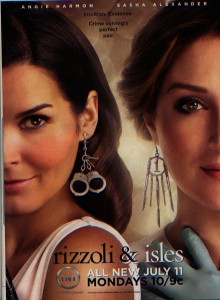 Do you get it? One’s a cop. Maybe a little rough around the edges (but insanely yoga-beautiful, of course, for gone are the days of schlubs like Tyne Daly polluting the airwaves; Tyne not only looked like she could theoretically take a punch, it looked as if she’d been punched, and recently, and often, by Evander Holyfield). The other one, Isles, does that  job that’s all the rage these days, a “death detective,” where she slices up murder victims, puts drops of something into blue test tubes, stares into microscopes before thoughtfully looking away, and talks about rug fibers. She’s not a people person, more comfortable around corpses. But underneath all that, still a babe. A hottie in a lab coat. Together, Rizzoli and Isles make a great team! You don’t even need to watch the show to imagine it. Look at me, I haven’t, and I can already recreate in my head the first six episodes. Exactly, scene by scene. So can you!

Sure, they spar sometimes. There’s some witty banter back and forth. Sort of an, “Oh, sometimes you make me want to SCREAM!” Not to worry, it’s all in good fun. Because, get this, people . . . they’re sooooo different. They are complete opposites. Like peanut butter and jelly, but in high heels, if you can picture it. The cop listens to her gut. She’s instinctive. The forensic pathologist, cerebral and cold, rolls her eyes and says, “I can’t solve a case based on your crazy hunches, Rizzoli. We need facts!”

In the end, each one learns a little something from the other, but always grudgingly. Opposites attract, don’t you know. Or have you forgotten Felix Unger and Oscar Madison? Sam Malone and Diane Chambers? Sandra Bullock and Jesse James? 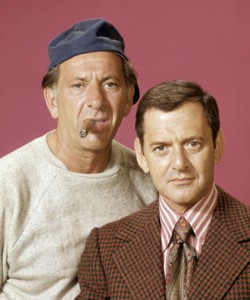 I’ll miss the show when it’s gone. No, really, I mean it. I only hope Angie Harmon keeps doing those Neutrogena commercials. And who didn’t like her as the husky-voiced, neo-conservative Assistant District Attorney, Abbie Carmichael, who was forever getting life lessons from tough-minded liberal, Sam Waterston? It was another of my favorite ampersand shows, “Law & Order.”