My Scholastic editor, Shannon Penney, just passed along the upcoming SLJ review for Justin Fisher Declares War! After so much time went by since the August 1 publication, I just assumed that they had either: 1) ignored it; or 2) reviewed it, hated it, and Shannon spared me the sorrow. (Yes, that’s how I roll.) But no, this review is actually pretty nice.

“Dignity!” — I liked that word. Thank you, Terry Ann Lawler of Phoenix, Arizona! 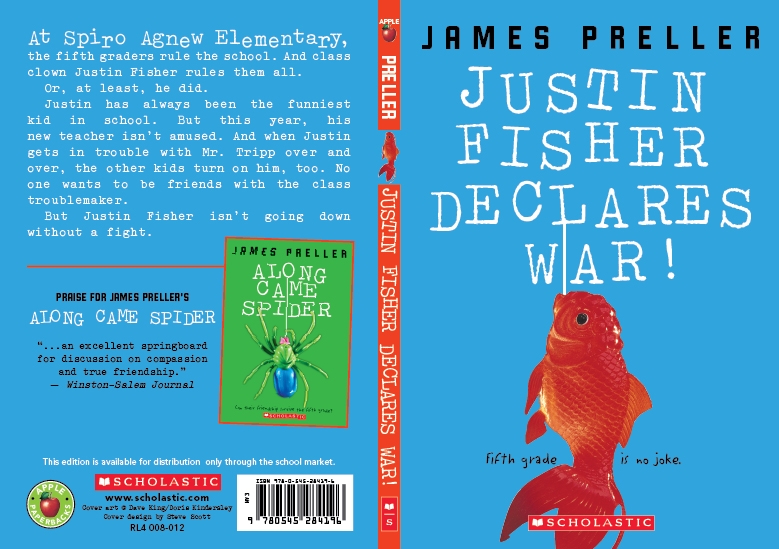 Gr 4-6–Justin Fisher is lonely. Last year, he was the class clown; now, in fifth grade, he’s somehow turned into the class jerk. His antics in school and out are not getting him laughs–they’re getting him in trouble. As he is sent to the principal again and again, he becomes more and more desperate to fit in. Fortunately, with the help of an understanding teacher and a new friend, the boy learns how to be funny without being mean and saves the day at the school talent show. This quiet, universal story about a regular kid acting out who just needs a hand will make a good classroom read. Preller handles sensitive issues with dignity, and kids will identify with Justin’s eagerness to be liked and his snarky jokes. The book will be a particular hit with fans of Lenore Look’s Alvin Ho and Jerry Spinelli’s Maniac Magee.–Terry Ann Lawler, Phoenix Public Library, AZ