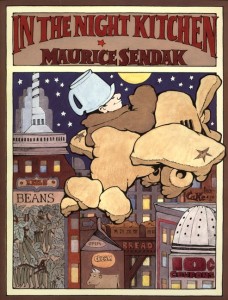 We are celebrating banned books at the Guilderland Public Library tonight (Wednesday, 9/29). Author Lauren Myracle will be there via Skype visit, and many more local authors will attend in support of the cause. I have been granted five minutes to read anything, and it’s an impossible decision. So given the format, and the obvious choices — Huckleberry, Mockingbird, Fahrenheit, Catcher, etc. — I decided to go with Sendak’s In the Night Kitchen. It’s such a fun book to read aloud.

And besides, audiences always love the gratuitous nudity! 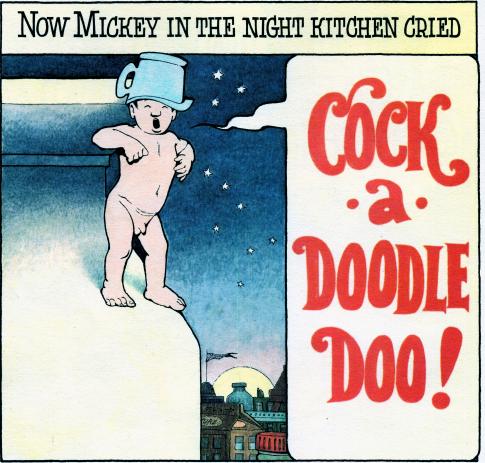 Published in 1970, In the Night Kitchen earned many awards, including Caldecott Honor Book. However, it has been often challenged in schools and librarians, usually for its depiction of a butt-naked Mickey, without any “offensive” parts lopped off. The book ranked #21 on a list compiled by the American Library Association of “100 Most Frequently Challenged Books: 1990-1999).” 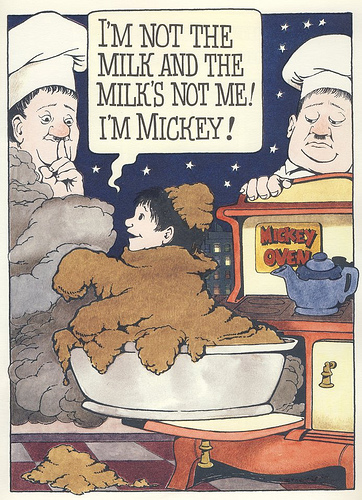 As a cool aside, I learned today that In the Night Kitchen was, in part, an homage to illustrator Windsor McCay’s “Little Nemo” comics. This blog post is fun, brief, visual, and worth reading.

Here’s a few more of my favorite quotes on the subject book banning:

“A word to the unwise. Torch every book. Char every page. Burn every word to ash. Ideas are incombustible. And therein lies your real fear.” — Ellen Hopkins.

“A censor is a man who knows more than he thinks you ought to.” — Laurence Peter.

“There are worse crimes than burning books. One of them is not reading them.” — Joseph Brodsky.

“Censorship, like charity, should begin at home; but unlike charity, it should end there.” — Clare Booth Luce.

“Congress shall make no law respecting an establishment of religion, or prohibiting the free exercise thereof; or abridging the freedom of speech, or of the press; or the right of the people peaceably to assemble, and to petition the government for a redress of grievances.”— Amendment I, Bill of Rights, United States Constitution.