I’m not a prankster, merry or otherwise, so April Fools Day isn’t a big day here at Chez Preller. But as a kid, we had one surefire trick that worked every time. It was fast, easy, and painless (illustrations by Jamie Smith). 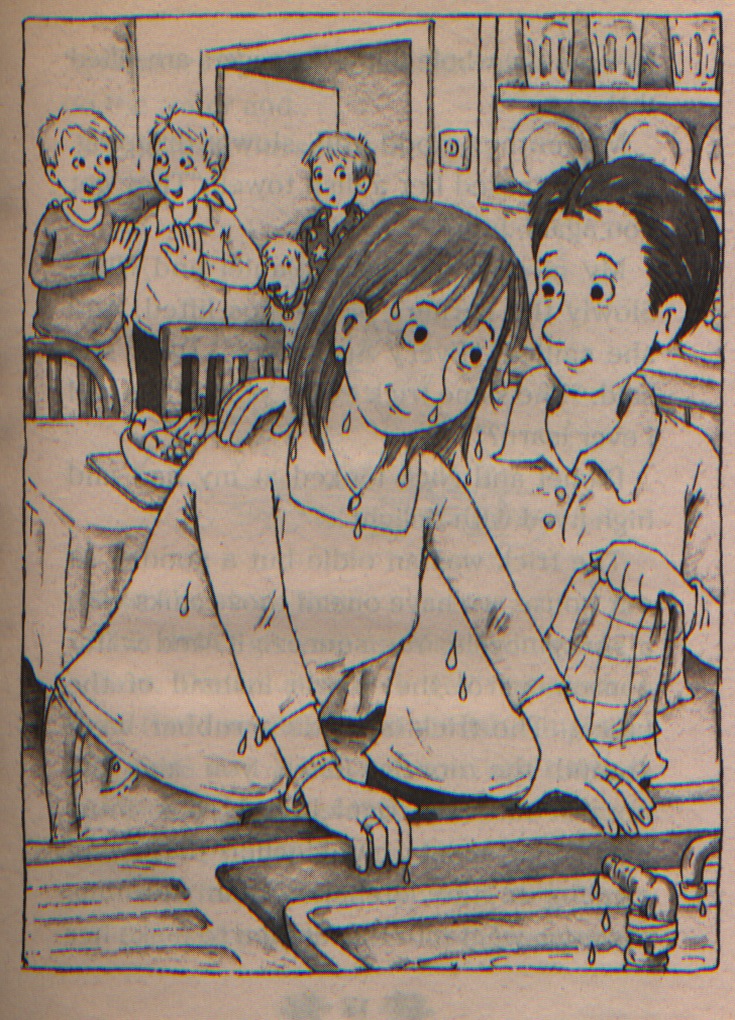 I wrote about it in the “currently unavailable” Jigsaw Jones #22: The Case of the Perfect Prank. (Yes, it kills me to type that.)

To set the scene, Jigsaw wakes up to screams. He finds his mother at the kitchen sink, soaking wet. We’ll let Jigsaw take it from here:

The trick was an oldie but a goodie. At our house, we have one of those sinks with a spray nozzle. You squeeze it, and water comes out of the nozzle instead of the faucet. The trick is to tie a rubber band around the nozzle. Then you aim the nozzle outward. Daniel and Nick must have done it last night, when they were giggling in the kitchen. Come morning, my mom went into the kitchen to make her “necessary” pot of coffee. She turned on the water and . . . splash, the spray hit her! 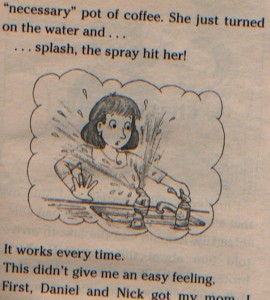 It works every time.

Kids ask me all the time, “Where do you get your ideas?”

Sometimes it’s as easy as recording a memory . . . and giving it to someone else, a shift from memoir to fiction that makes all the difference. And of course, Jigsaw’s perspective was my life perspective as the youngest in a family of seven children. Sometimes you’re in the middle of the action. Other times, you’re the forgotten observer, witness to all the goings-on. They didn’t realize I’d write about it 30 years later. Neither did I.

I think the trick for teachers — and this is so hard — is to get kids to value the everyday life that surrounds them. All that “slice of life” stuff. Ideas aren’t some magical golden drops from the gods. And if writing has given me anything (and it has), it’s been reflection, looking back, holding on to something valuable amidst the blur and whoosh and accelerated push of life. Maybe I’m just old. But those memories mean more and more as each year passes.

Now if you’ll excuse me, I have to go find a rubber band.