Stories Behind the Story: The Case of the Runaway Dog

As we close in on Thanksgiving, and turkeys grow nervous, I thought I’d take a look at Jigsaw Jones #7: The Case of the Runaway Dog, since it features a Thanksgiving subplot. 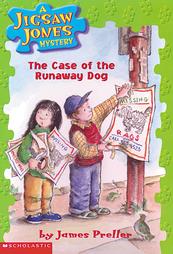 The book opens with Ralphie and Jigsaw discussing the relative merits of various holidays.

“How about Thanksgiving?” Ralphie asked.

“I’m not crazy about the food,” I complained.

“You know what bugs me about Thanksgiving?” Ralphie said, shaking his head. “Stuffing! I mean, what IS stuffing, anyway?”

My sentiments exactly, especially when I was Jigsaw’s age. Rags disappears while on a dog walk in the park, after Jigsaw lets him off leash to play “Pilgrims and Turkeys.” Rags was the turkey, and they chased him around with pretend axes. I modeled the park in the book after Washington Park, in Albany. There’s the open field on the hill, the lake, the bridge, the boathouse. It was a place I knew well, since it was where I used to run and where I took my old dog, Doolin, many times. 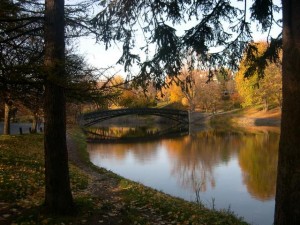 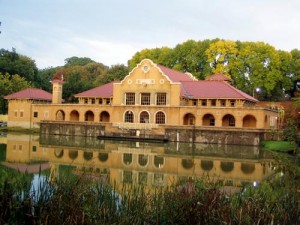 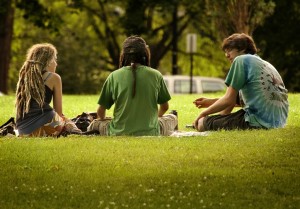 The big challenge in writing a series is trying to keep it fresh — for the readers and for me. Therefore, I always avoided the strict formulas employed by some other series. Another tactic was to introduce new characters along the way, or to put the focus on a hitherto secondary character. It was a transfusion of energy: new blood. In this book, a key witness came in the form of Mr. Signorelli, named after one of Nick’s preschool friends.

He was a retired old man, without family nearby, who enjoyed the park. He tells Jigsaw, “I spend most of my days in the park. I’ve made friends with a few squirrels. I bring ’em peanuts and we keep each other company. I don’t know who looks forward to our visits more — me or them.”

I had a minor conflict with my editor at the time, Helen Perelman, over Mr. Signorelli. He smoked cigarettes. Helen wanted me to change that. But I wasn’t advocating it, just recognizing that some people smoked, and it didn’t necessarily make them Bad People. After all, both of my parents smoked all their lives, and I liked them pretty much. Persuaded, Helen allowed me to keep Mr. Signorelli intact.

In these books, I often try to include a school element. Ms. Gleason introduces an “I Am Thankful For . . .” project. It helped give the story a stronger connection to a typical elementary student’s life, where that kind of project is often done at this time year. It also lent the narrative another through-line to follow. For me, it can’t be plot/clue/mystery all the time. The truth is, when you break it down there’s not much detailed mystery to these stories; what I love, what I’m after as a writer, is all the other fabric wrapped around that basic skeletal structure.

When I grew up, my brother Billy, ten years my elder, was the #1 motorhead in the family. He loved cars and even worked at the Citgo gas station. For me, it was pretty awe-inspiring to have a big brother who pumped gas, who could open a car hood, tool in hand, and say, “Ah, I see the problem.” When he came home, he always had so many coins jingling in his pockets! I remember Billy spending a lot of time washing his hands, trying to remove the grease from underneath his fingernails. 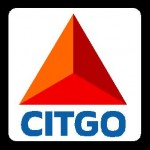 So of course it was Jigsaw’s older brother, Billy, who borrows mom’s car to take Jigsaw on a ride to the Animal Rescue Shelter. To write that scene, I visited a rescue shelter in Menands, taking notes as I walked around. On school visits I sometimes tell kids that research isn’t always about dusty books in quiet libraries. Often it’s about getting out into the world, seeing things, talking to people. That is: it’s kind of interesting.

The dogs were kept in another room. It was like a big garage, with a cement floor and cement walls. The dogs were locked behind high, narrow fences. Some dogs sat and stared as we walked past. A cute Dalmation leaped against the fence, whining sadly. Most dogs barked. You didn’t have to be Doctor Dolittle to understand what they were saying — “Take me, take me. I’ll be good. Take me!“

Other dogs just lay on the ground beside their water bowls. They didn’t seem to care one way or the other. They only lifted their heads and followed us with blank eyes.

It was one of the saddest places I’d ever been.

Jigsaw returns to the park to find Mr. Signorelli. Jigsaw advises him to quit smoking. The old man doesn’t seem very receptive. After some sly detective work, Jigsaw and Mila, along with the help of Ralphie, manage to track down Rags. Case solved, Jigsaw has one more thing to do. He again (conveniently, I’ll admit) finds Mr. Signorelli at the park on Thanksgiving morning. Jigsaw asks, “What are you doing today? For Thanksgiving, I mean.”

I love this next paragraph, because I always like it when straight physical description can convey the inner feelings of a character:

He scratched the end of his nose and looked out across the lake. I followed his gaze. But there was nothing there. Just water and emptiness.

Mr. Signorelli waved his hand, like swatting away a fly. “Don’t make a big deal out of it,” he said. “I’m not making any promises. Maybe I’ll quit. Maybe I won’t. We’ll see what happens.”

Jigsaw invites the old man to his house for pecan pie. His parents had already approved the gesture, and even Grams said it sounded like a terrific idea.

We walked out of the park together. 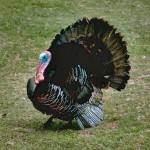