Does anybody remember Charles Chips?

I do, or just did, recently, after not remembering it for years and years. Suddenly, once again, there it was: a specific object of memory newly recovered, pressing up against my skull. That big 16-ounce drum of Charles Chips. 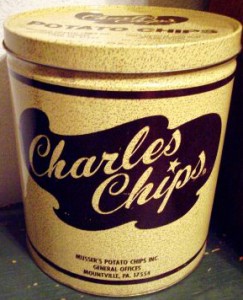 For me, pushing 50, closing out the first decade of the 21st century, it’s an almost dreamlike memory. Not that there was once a company that made chips and pretzels. But that those items were delivered, from home to home, in a truck that looked like this: 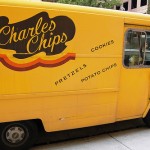 My brother, Billy, you see, was once a Charles Chips Man. He drove a truck exactly like that, wore some kind of brown uniform, and had a route that carried him to various points on Long Island. I don’t really know the specifics of his job; I’ll have to ask him about it over Thanksgiving. But I do remember, as concrete image (for “image” is the container of memory; we need to “picture” those wisps of time), those tan-and-brown tin drums on top of our refrigerator. I can remember my fingers prying open a tin, working around the lid in a circle, lifting bit by bit. We loved our Charles Chips at 1720 Adelphi Road in Wantagh, New York. Seven kids, remember. So on a regular basis, that familiar truck would pull up to our house and the delivery man would ring the bell. Oh, the excitement!

He’d ask if we needed any, and of course we did, three or four cans every time. We’d return the old cans, which I suppose were reused, and then off he’d drive to the next Charles Chips-loving house on the route.

How was such a thing ever possible? Could it be true? Oh, it was true, and glorious. A man would drive around in a truck delivering potato chips and pretzels from house to house, and how we loved it.

And one day — I suppose it was one day — he was gone. Not enough business to sustain the route, or perhaps not enough children left in our house. The Charles Chips Man stopped coming, stopped ringing our bell. And this afternoon, when I told Nick and Gavin about it, they looked at me as if I had lived in another land, a distant impossible time before they existed, when their father was a boy.

Does anyone else remember?