Big day here at James Preller Dot Com. Nevermind the mess. Kick those balloons out of the way, pick the confetti out of your hair later. We’re thrilled for today’s visit from the nearly-legendary author Bruce Coville! Or should I say the impossibly prolific? The glistening-domed scribe? Words are so hard sometimes. Anyway, I’m glad to have Bruce here, an author of wit and wisdom and unfailing good cheer (so long as he doesn’t open a newspaper). 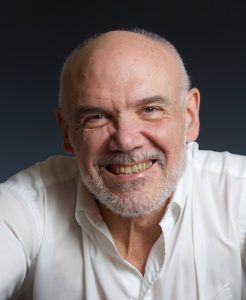 Bruce, welcome. I’m eager to discuss Hatched, the second book in your “Enchanted Files” series. I should let readers know that each title in the series is a stand-alone, they don’t have to be read in any order. Or at all, I suppose!

Hey, don’t let people off the hook that easily. Of course they should read them all!

I guess the literary term for this book is “epistolary,” in the broadest sense. Not limited to letters, but inclusive of documents, cell phone photos, newspaper accounts, journal entries, and so on: multi-textural. It’s a highly entertaining way to deliver a story. Tell me about what attracted you to this narrative device. 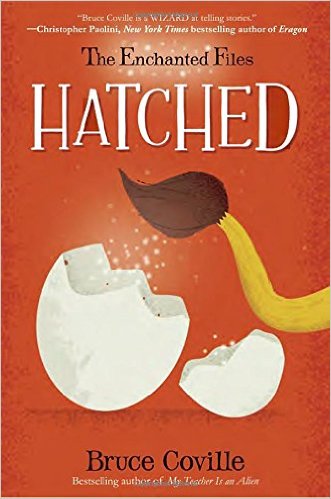 Actually, I’ve been trying for some months now to remember how I first thought of it! I think what happened was that when I was working on the proposal for the first book in the series, which was originally titled Diary of a Mad Brownie (long story there!), I realized I had a lot of information I needed to convey that the main character would not put into his diary, for example things about his world that he would take for granted but that would not be common knowledge for a young reader. Once I started down that path, I realized what a good source of humor such documents could be, especially with ironic juxtapositions.

It seems like you are having fun. It comes through in the book. I can imagine you giggling to yourself as you typed.

Totally! When kids ask if I like writing, I always explain that there are days when my head feels like oatmeal, and I think the only way I can get something out of the keyboard is if I plant a geranium there.

Other days I’ll write something so fabulous it makes me laugh out loud and hug myself. Naturally, I have a lot more oatmeal days than I do scream and hug myself days. Thing is, you have to live through the oatmeal to get to the hugs.

I think someone on the interwebs needs to create a meme right now with your face and the words, “You have to live through the oatmeal to get to the hugs.” Back to the book — the design is fresh, clean, and inviting. Fabulous covers, especially. As a hot-shot author, did you have input into that aspect of the publishing process?

In this case it’s rather a long story.

That seems to be a trend with you. Try to hurry it up, I rent by the column inch. 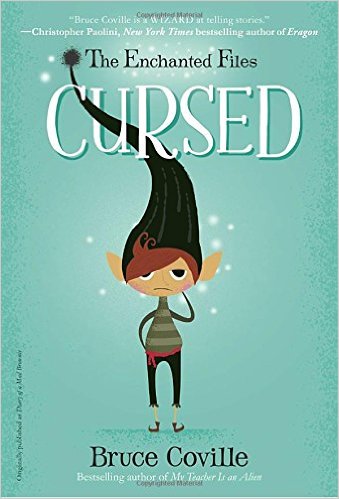 The first book (born Mad Brownie, but called Cursed in paperback) got great reviews, but did not do as well as we had hoped. In retrospect, I think the title was all wrong for the audience. It made adults laugh, but mostly just baffled kids.

Random House, bless its collective heart, believed in the project enough that rather than drop it –- which some other publishers might have done -– they literally went back to the drawing board and came up with an entirely new look that everyone seems to love. (Which shows what I know; I thought the art for the first cover was great!) 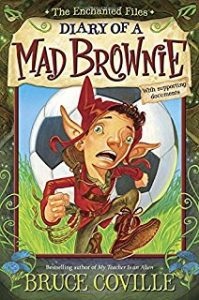 That original cover artist had actually already done a crackerjack cover for Hatched, but it was replaced with the cover you’ve seen, and quite rightly described as “fresh, clean, and inviting.”

Because of the “epistolary” aspect of the books, I have indeed been involved in the design aspects of the interiors, much more so than usual. Much discussion of typefaces has ensued. And the artist, Paul Kidby, has been wonderful at coming up with different illustration styles, as the documents are supposed to be from a wide variety of sources.

You’ve long been interested in the magical, fascinated by the fantastic, always with a healthy dose of humor and playfulness. Publishing trends may come and go, but that’s always been your sweet spot. You’ve been ahead of the times and you’ve been behind the times, inhabiting your own planet, yet always working away, doing your own thing. Writing Bruce Coville-type books.

As the great Popeye so often said, “I yam what I yam.” 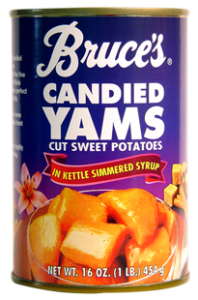 Where did that interest come from? Is it something that goes back to your childhood?

Oh, definitely. But, changing styles aside, I think the mix of a compelling story with goofy humor is something that all kids love, always. Whatever is currently in style has as much to do with publishers seeking the next big thing as it does with actual kids. Okay, that statement is less true for YA fiction, where there are definite trends and fads. But for a large subset of the 8–12 year audience fantasy, science fiction, and adventure –- all leavened with humor –- will never go out of style.

This may sound silly, since this is a book about an imaginary creature, but what kind of research went into it? You are writing within a tradition, after all. You can’t just make it up. Can you?

Oh, I do a vast amount of research for these books. Obviously studying the creature that will be at the center of the story is vital. And not just because you’re writing about a figure for which there is a lot of existing lore. The delicious side-effect is that the research actually sparks all kinds of plot ideas. A good example would be the armband worn by Alexander the Great that plays an important part in the resolution of Hatched. That whole strand of the story came about because in the initial research I learned that there is a story about Alexander harnessing a pair of gryphons in an attempt to reach the heavens.

But the research isn’t restricted to the magical aspects of the story. I needed a place for Gerald, the griffin, to stay where he could avoid being seen. Once I decided that the Catskills would be perfect for my purposes, I had to research the area and its lore.

And doing a backstory for the gnomes that are also key to the book led to studying some Dutch history. I was fairly amused when the translator working on the Dutch edition queried me about naming their colony New Batavia, since Dutch kids learn that Batavia was the original name for Jakarta. I was able to tell her in return that the reason that city was called Batavia to begin with was in honor of the Batavi, a tribe that led a revolt against Rome in the first century AD, and that in the 1500’s there was a movement (“The Batavian Revival”) to claim the tribe as the forebears of the Dutch people as part of a nation-building/myth-making effort.

Really, I become a fountain of useless information when I am working on something like this! 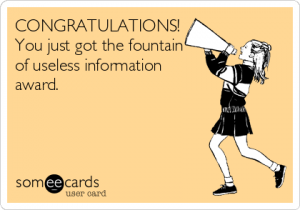 It took you all the way to page five before your first “stinky fart” joke. I believe “unicorn poop” is mentioned on the same page. Get a hold of yourself, Bruce! How in the world are you going to win a Newbery with this kind of attitude?

Brief story: The late, great Paula Danziger was a close pal of mine. She once told me about a snot joke she had put in one of her Matthew Martin books. Her editor wanted her to take it out. Telling me about it, Paula said, “I told him it stays. And that’s why I’ll never win the Newbery!”

But she sure had a lot of readers!

Seriously, you are willing to go there. The facile answer is that you’ve never grown up. But I wonder if you have anything to say about the place of “low humor” in children’s literature? Besides uproarious laughter, you must have gotten a few complaints over the years.

Actually, I used to have an entire speech called “The Importance of Bad Taste in Children’s Literature.” The essence of it was that as a writer I believe you have to start where the child is, not where you want to take them. 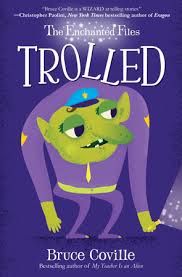 Look, if you say to a kid, “This book provides a deep and meaningful meditation on the meaning of life, and will prove to be important to you and the person you are to become,” the kid’s response is likely to be “That’s nice, but I have an important video game to play.”

But if you start the book with some slightly naughty humor, then catch them with the story, they will follow you anywhere. And that is when you can also provide something deeper and more meaningful. On the other hand, if you gain the gift of a child’s attention but don’t go on to also feed his or her heart, I count that as a failure.

The book is built upon the relationship of Brad –- a human boy -– and a Griffin, Gerald Overflight. Obviously, characters from different worlds. You like to write about that nexis where the magical and the modern world come together.

Tell us your thoughts about Brad. Are you an author who has it all mapped out beforehand, or are you discovering him as you write?

Oh, I was totally discovering Brad as I wrote. One day when I was only partway into the book the editor contacted me and asked for a description of Brad to give the cover artist. (This was before the style change.)

To be honest, describing the main character is not a strong point with me . . . I mostly like to leave room for readers to imagine themselves in the lead roles.

In Elmore Leonard’s classic phrase, you leave out the parts that readers tend to skip.

But it is important for most covers. They asked if Brad could have dark hair and eyes, and maybe despite his Scottish heritage (something that later changed anyway) be not too fair-skinned.

My reply was that as far as I was concerned he could be black. I was being a bit flip. But that email exchange led to me deciding to make Brad of mixed race, which in turn helped make him a much richer and more interesting character in the final version.

Ah, that opens the door an entirely different conversation about diversity and representation in children’s books — a topic we can’t possibly due justice to today. Maybe we can tackle it another time. Because look: we made it through to the end without you jumping on a chair and screaming about Donald Trump. You’ve shown admirable restraint.

That’s because I’m tired of having to replace keyboards after I pound out a message that sets them on fire! 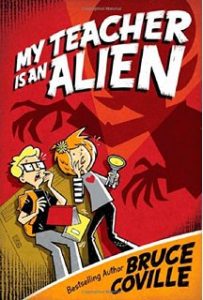 BRUCE COVILLE was born, raised, and still lives in the Syracuse, New York, area, where he is king of all he surveys. He has written many books and enjoys visiting schools, because that’s where they keep the kids.