I’m loving the story of a statue that mysteriously appeared in a Portland, Oregon, pubic park — reportedly without the knowledge of city leaders. The statue is of York, an enslaved man who participated in the Lewis & Clark Expedition. The only Black man to make the two-and-a-half-year journey. 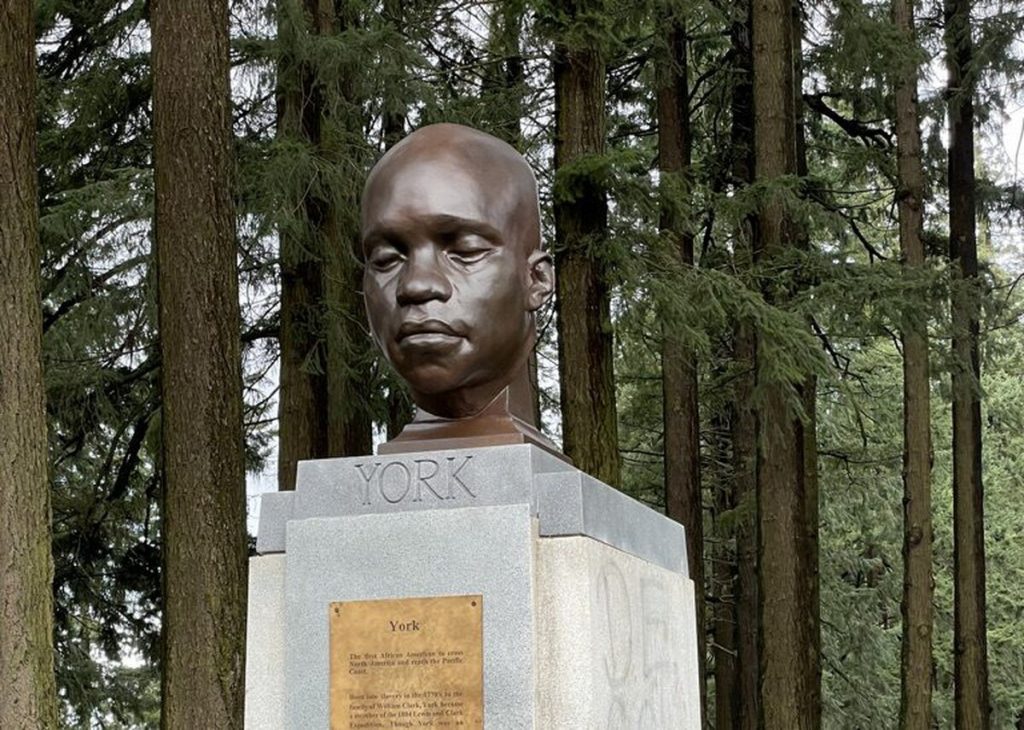 From the 2/22 New York Times, written by Alan Yuhas:

Over two years, York trekked some 8,000 miles from St. Louis to the Pacific Northwest and back, hunting, tracking, foraging and, at least once, voting as a Black man held in bondage by another, more famous member of the Lewis and Clark expedition.

Last weekend, almost 215 years after the group made it back to Missouri, a large bust of York was raised in a Portland, Ore., park without fanfare or explanation, on the spot where a statue of a prominent conservative had been toppled last year. City leaders, acknowledging that they had no idea who put the monument to York there, said it looked great.

“This is what we’re calling guerrilla public art, but it was a pleasant surprise,” said Adena Long, the director of Portland’s parks bureau. York, she said in an interview, is “a figure that in my mind that we need to do a better job of proactively and thoughtfully celebrating.”

Ms. Long said that she was not aware of any message about the bust from those responsible, but that it would be allowed to stand so long as it does not pose any safety risks, in line with a bureau policy regarding tributes. “We’re hopeful the artists will make themselves known so we can have a conversation, but it will stay,” she said.

Park officials, who received word of the bust on Saturday morning, believe it was installed the night before. The bust, apparently made of hardened plastic, portrays York as bald and looking down with a somber expression, above a plaque describing him as “the first African-American to cross North America and reach the Pacific Coast.”

I made sure to include York’s role in my novel, The Courage Test (2016 Library Guild Selection), which mirrors the historical exploration of Lewis & Clark with a fictional boy’s experiences following the same trail with his estranged father.

Late in The Courage Test: Will and his father, a historian, are hiking along the Bitterroot Range. Will passes one evening by looking through one of his father’s books (pp. 142-144). They have this conversation:

I come across a reproduction of a painting. I call to my father, “Hey, Dad, who’s the Black guy?”

He glances over; I hold the book up to show him the picture.

“That’s York, Clark’s slave. He came along on the trip.”

I take this in for a moment. I don’t know why I hadn’t noticed it before. They actually brought a slave across the country. And somehow that’s not totally creepy?

“They dragged him along, like you dragged me,” I say.

“Hardly,” my father scoffs. “You’re just another spoiled kid who watches too much television. York was a real slave. William Clark owned him. They grew up together.”

Chill, Dad, I was joking. I know I’m not actually a slave. 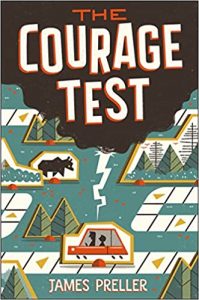 “Wherever the expedition traveled, the Native people were amazed by York, who by all reports was very large and muscular,” my father the professor can’t help but explain. “They’d never seen a Black man before. On at least one occasion, the Native people rubbed dirt on his skin to try to make it come off.”

“So did Clark let him go free after the trip?” I ask.

“No, things got even worse,” my father says. “After they returned, York argued for his freedom. He said, in essence, ‘Look, I traveled as an equal with all of you for two and a half years. We hunted, hauled, and faced many dangers together. Every man was paid money and given land. All except for me. I got nothing. So in payment, I ask you, please set me free.'”

“It’s a Yiddish word. It means ‘nothing.’ Clark wouldn’t do it. He refused to grant York his freedom. In fact, in later years Clark became quite unhappy with York, who he considered impudent.

“It means, ‘not showing due respect,'” my father explains. He sighs, runs a hand across his jaw. “Times were different back then.”

“I guess so,” I say, thinking about how much changes, and how much seems to stay the same.

I wrote in an “Author’s Note” at the end of the book: 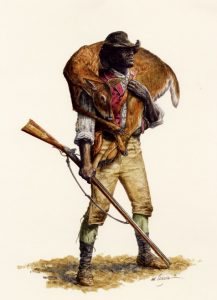 Painting by Michael Haynes, depicting a hunt as recorded in Meriwether Lewis’s journals.

York, a slave — a man owned as the property of William Clark — eventually did earn his freedom, though it took at least ten years after the expedition’s triumphant return before Clark freed him. The historic record is incomplete and conflicting, as if York was a man little worth noting. One legend has York returning to upper Missouri as a free man, going off to live with a tribe of Crow. However, most historians believe that York contacted cholera and died somewhere in Tennessee after working in the trade industry. The exact date and location of his death remains unknown. In many ways, York’s stunted life serves to illuminate the tragic, cruel legacy of slavery in America.

REVIEWS FOR THE COURAGE TEST . . .