Tag Archive for ALA Convention Preller

RULES FOR WRITING: “Go to the Thing Which Frightens You Most.”

I was in Chicago — which I believe is somewhere in Illinois — attending the annual ALA Conference. (Quick report: fun and inspiring.) Macmillan put together a dinner where authors had the opportunity to meet librarians from places near, far, and beyond.

It was like a speed dating scenario. And weird for me, because (despite the navel-gazing evidenced on this blog) my preference is NOT to sit down with a group of strangers and talk about myself. But it would be lame, in that situation, if the conversation didn’t shift over to me, me, ME, Me, mE, me!

So I cringed and tried to meet those expectations as gracefully as possible — while: 1) Eating; 2) Being “Interesting”; and 3) Staying true to myself.

I got too talking about my new Scary Tales series with two women seated to my right. They asked about what I was writing now (always a good question to ask a writer) and I sighed and said, “Well, I’ve got two ideas. I started on one, it’s my first science fiction story and it scares me to death. I’ve never written anything like it before.” They nodded, smiled. I continued, “The other story idea is very solid — I can see it already — but it’s more familiar, more conventional.” 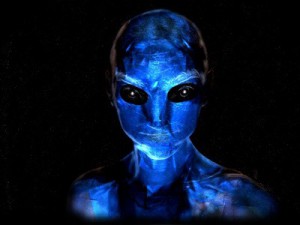 I told them that I was ready to put aside the sci-fi story for the relative safety of my more conventional tale. One story I knew I could write; the other was far less of a sure thing. Shouldn’t I write what I already knew I was good at?

And both of them were like, “Oh no! You have to write the one that scares you.” They had no doubt about it whatsoever. And as they were talking with me, these words came to me: GO TO THE THING WHICH FRIGHTENS YOU MOST.

That was the lesson of the day, what I learned as a writer. And maybe as a person in general (which most of us are).

Go to the thing that isn’t easiest, isn’t safest. Go to the job that has the greater challenge, and the greater risk (i.e., chance of failure). I knew that the science fiction story could be a massive failure, and possibly wrong for the series, whereas I was certain that the other story would be a good, solid, next step for the series.

The risk, I guess, was that I wouldn’t be meeting expectations. Of course, the trouble was this was a game played out inside my own skull with little bearing on reality. Who had any “expectations” at all? I mean, yes, a committee would not have said, “Now do a SCARY TALE set on a distant planet.” But this was my work, the thing that I’d be throwing out into the world. There was no committee, no guidelines to follow.

As I thought more about it, I understood that it was also a theme of the story itself. Go to the thing which frightens you most. I needed my central character, Levi, to do just that, too.

Know what you have to do, be frighened by it, and then do it anyway. 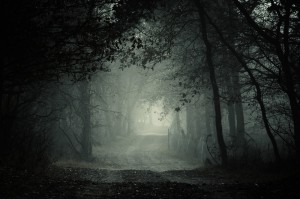 And, of course, that’s also the journey for the book’s potential readers. They seek a scary story, a fright, a perplexing twist.

So that’s what I learned in Chicago that evening. That thing which makes your pulse quicken? That sends your heart hammering in your chest? That makes you want to turn off the dark path?

That’s when you’ve got to keep walking, deeper into the woods.

If you really want to feel alive. If you want to grow.