I was recently interviewed by Caroline Starr Rose over at her outstanding website, brimming with fascinating resources. Caroline is a gifted author and a generous spirit. A kind person, you know? She’s all about books and classroom connections and finding ways to make a difference. Please check out her space over there. And her books. Meanwhile, let’s please get back to me, please! 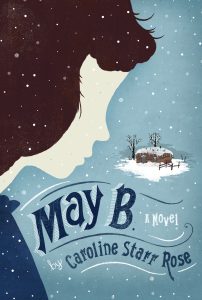 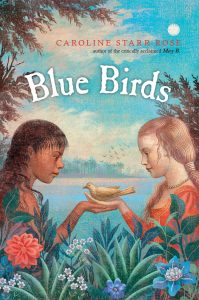 Here’s a sampling of my interview with Caroline, who blogged it a couple of weeks back. For the full interview, and a shortcut to Caroline’s world, just jump up and down on this link here.

What inspired you to write this story?

I published my first book in 1986. Over that period, more than half my life, I’ve discovered that what first inspires a story often gets left in the dust as the research and the writing begins in earnest. New inspirations take hold. Unimagined pathways open up, as long as the writer is still open to the unexpected.

Early on I had the basic setup of siblings lost in the wilderness, along with a vague idea of a hermit, possibly a veteran with PTSD, lurking nearby. At the time, I wasn’t sure what his story would be. I wanted the book to be tense, scary in parts, tightly plotted, riveting, and beautifully written. I held onto the idea that the person who saves you, might turn out to be your worst nightmare. Somewhere along the line my editor suggested a dog. Um, okay! And around this point it dawned on me that I had an awful lot to learn in order to do justice to this story. So I read books. About trees. About survival. About the psychology of getting lost. About veterans with PTSD. About dogs and how they think (I was determined to avoid the Disney-dog cliché; I wanted my dog, Sitka, to be authentic as a dog.) I learned about mountain lions.

Along the way, I told my editor, Liz Szabla, that I might maybe miss the deadline. And I did miss it — by a full year. Liz was cool with it. When it comes to publishing, I believe that all anyone cares about in the end is the finished book. No one reads a disappointing book and thinks, “Well, at least she hit her deadlines!” It just happened that Blood Mountain required extra time for me to think and learn and daydream. I filled a journal with notes, became overwhelmed with ideas and strategies, lost my way, fumbled in thickets. Along the way, I contacted a Forest Ranger, Megan McCone, who proved enormously helpful in terms of making the actions and thoughts of the ranger appropriate and accurate. All of those inspirations fed directly into the final book. Best writing experience ever.

Could you share with readers how you conducted your research or share a few interesting tidbits you learned while researching?

I simply had so much learn. Because “kind of knowing” isn’t good enough. For example, I wanted to introduce the hermit, John, in a powerful and unsettling way. So readers first encounter him with a large knife in his hand, field dressing a squirrel. I had to learn about slingshots and hypothermia and 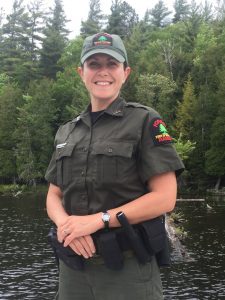 New York Ranger Megan McCone served both as inspiration and valuable source of information. I owe her so much.

aviation extractions. And about how people who get lost behave –- the mistakes they make, the thought processes they typically go through, and the things they do that determine whether they live or die.

Most interesting, for me, was when I reached out to Eric Lahr at the Department of Environmental Conservation, who put me in contact with Forest Ranger Megan McCone. Megan was enormously helpful across several long phone conversations. She graciously volunteered to read the first draft of the book, making comments throughout. To me, this was not only a great pleasure, Megan helped me bring truth, the verisimilitude of small details, to this made-up story.